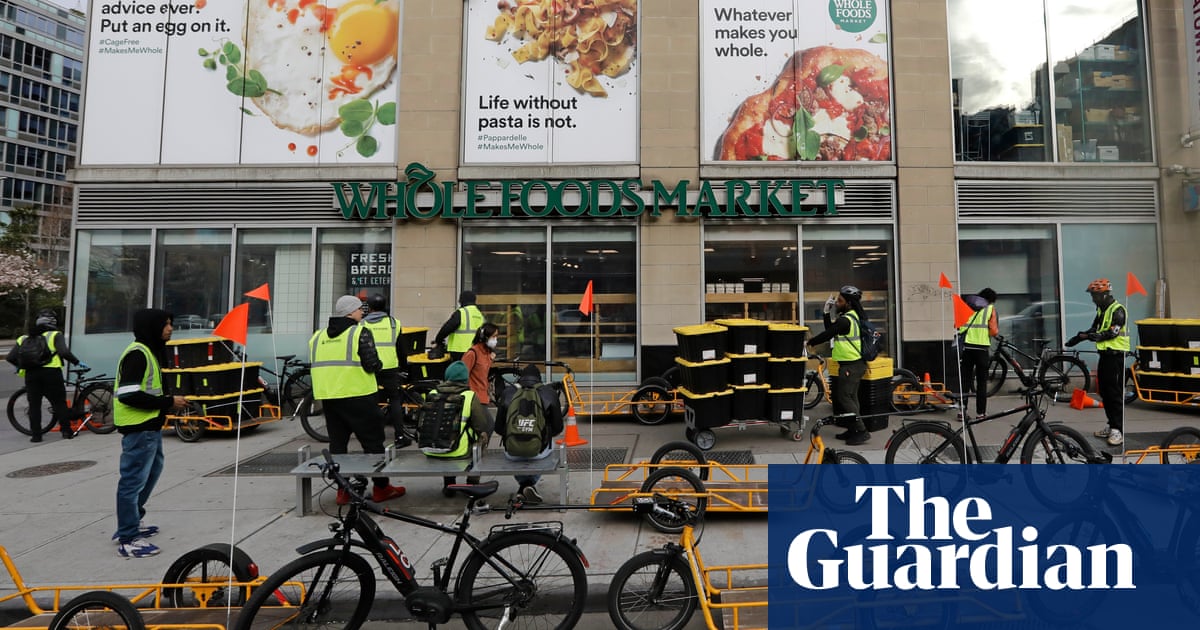 Whole Foods workers across the US are planning to hold another sickout protest on 1 May, as the number of confirmed cases of coronavirus infections at the supermarket chain continue to rise and workers charge the Amazon-owned company is doing too little to help them.

Workers complain too little is being done to enforce social distancing in stores; it is difficult, and sometimes impossible, to qualify for sick pay; and some are not given masks or training on cleaning. In the meantime, Whole Foods is reportedly recording record sales.

Dan Steinbrook, an employee at Whole Foods in Boston, said: “The bottom line is we don’t think Whole Foods or Amazon is doing nearly enough as they could be to protect both employees and customers at the store in terms of personal safety and public health.”

Steinbrook, who also participated in a sickout protest on 31 March organized by Whole Worker, a worker activism group said: “Grocery stores are one of the only places open to the public so they’ve become a significant public health concern in terms of stopping the spread of this disease. Any transmission we can stop at the grocery stores is extremely important for saving a lot of lives.”

The Guardian spoke to several Whole Foods workers across the US about working conditions and the company’s policies. The workers requested to remain anonymous for fear of retaliation.

“I haven’t felt safe going into work because Whole Foods hasn’t really done anything to combat the amount of Amazon shoppers in the stores,” said a Whole Foods employee at Bowery Place in New York City, the center of the coronavirus pandemic in the US. “The store has been closing earlier, but they still want us to stay until 11pm to clean, and we aren’t trained to clean or given masks or anything.”

Whole Foods workers have noted some stores where a worker has tested positive for coronavirus have yet to be publicly reported in the media.

“Team members are being told there was a deep clean overnight and not to worry,” said a Whole Foods worker in West Bloomfield, Michigan. “I’m scared to work. I have three immune sensitive people living in my house and I don’t want to get them sick, but I can’t lose my only income.”

A worker at Whole Foods in Chapel Hill, North Carolina, said there have been two positive cases at their store. “It has been almost impossible to maintain basic social distancing practices. We’ve seen huge sales ever since the outbreak and it’s been all hands on deck. As of 1 April, there were no limits on the number of customers allowed in at a given time,” said the employee.

In Minnesota, a Whole Foods employee is currently on unpaid leave after experiencing coronavirus symptoms when their roommate was advised by their doctor to self-quarantine.

“When I talked to my HR department they told me I would need to take a two week leave as well, but unless I test positive for Covid-19, I do not qualify for the ‘guaranteed two weeks paid time off’ corporate is saying they are offering,” said the worker. “Everyone knows tests are limited and unavailable to most people unless they are showing severe symptoms, and as retail workers, many of us cannot afford to go to the doctor unless we’re in desperate need of medical attention.”

“I’m in a situation where I can’t get tested or afford a doctor. At first I was told I wouldn’t be eligible for sick pay without a positive test. Later I was told that I might qualify, that pay was being disbursed on a case by case basis. My case has been pending for over a week with no response and I ran out of paid time off,” said the worker.

“My parents lent me money, so I’ll be able to finish quarantine and still afford groceries. Money was tight before bills were due, and those fears kept me from reaching out to a doctor. My symptoms were mild, but I don’t know what I would have done if they got serious.”

A Whole Foods spokesperson told the Guardian: “The safety of our team members and customers is our top priority and we are diligently following all guidance from local health and food safety authorities. We’ve been working closely with our store Team Members, and are supporting the diagnosed Team Members, who are in quarantine.

“Out of an abundance of caution, each of these stores performed an additional deep cleaning and disinfection, on top of our current enhanced sanitation measures. As we prioritize the health and safety of our customers and Team Members, we will continue to do the following to help contain the spread of Covid-19.”

Zettlekasten and food for thought served by technology – Mint