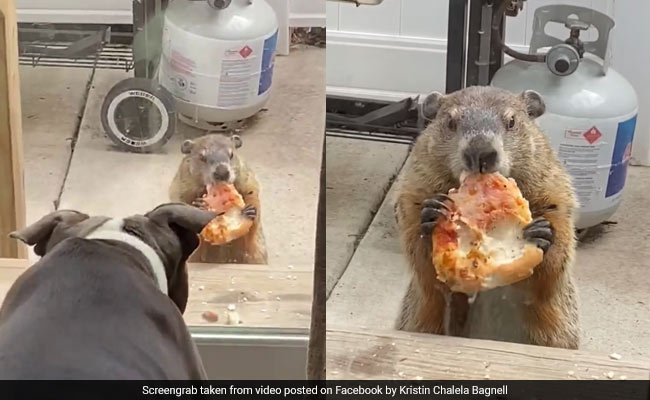 This video of a groundhog happily munching away on pizza is going viral.

A video of a groundhog happily munching away on a slice of pizza, not in the least bothered by two dogs staring him down, is probably the funniest thing you’ll watch today. The rodent was spotted sitting outside Philadelphia resident Kristin Chalela Bagnell’s house on Tuesday, chomping down on the stolen treat as her two pet dogs watched from behind sliding doors.

Ms Bagnell told CNN that the groundhog enjoyed the snack at a leisurely pace, taking an hour to complete it before scurrying away.

“Before I recorded, we noticed that pizza was out in our backyard and we didn’t know where it came from,” she said. “Then both of the dogs were very intently looking out the glass.”

She said she started recording when she saw the groundhog eating the pizza slice, and later shared the video on Facebook with the caption: “It’s not just the people that like Philly pizza….”

Since being posted on Tuesday, the video has been viewed over 24,000 times on Facebook. It was also reposted by ABC7 News, collecting over 4 lakh views and dozens of amused comments.

“This is me at breakfast lunch and dinner,” joked one person in the comments section.

“What a sweet and confident little dude,” another wrote, while a Facebook user said “He’s taunting the inside pets”.

What do you think of the gutsy groundhog? Let us know using the comments section.