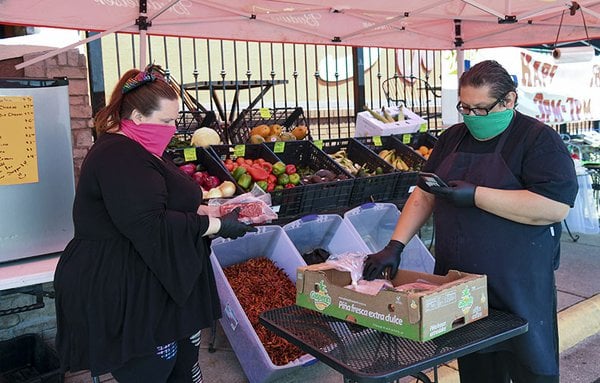 As many businesses struggle to generate revenue during the ongoing pandemic, some have resorted to creative measures, such as Salsa’s Authentic Mexican Restaurant & Cantina, which has opened a small produce stand outside of the restaurant.

While the restaurant, located at 4324 Central Ave., remains open to carryout orders, the small produce stand ensured that none of the products in its coolers went to waste after Arkansas Gov. Asa Hutchinson first ordered all restaurants to cease all dine-in service last month. It has since turned into another way for Salsa’s to continue to serve the community.

When Salsa’s was forced to close the dine-in area, they adapted and constructed an area where customers can drive through and pick up their orders. However, Eligio wanted to take things a step further and ensure nothing in the coolers went to waste.

“When the pandemic started and the restaurants started closing down, there was a lot of produce and food in the coolers that needed to be used. So we decided to load our van, me and my wife, and we went around town, we used Facebook, and we sold it,” he said.

“People don’t want to get out to the stores and expose themselves, like people who have immune systems that can be compromised. So we came to the idea and I talked to the owner of the restaurant, my boss, and proposed that we start a produce stand.”

The produce stand offers a variety of fresh vegetables, fruit, dry goods, meats, dairy products, canned goods, and even toilet paper. They are also selling pints of the restaurant’s salsa and the cheese used to make the queso. Eligio said he can order and deliver anything that someone needs. He can get a truck to deliver goods up to two times each week.

“During this, we found two different things. Number one, the need of people that are actually staying home and they need food at their houses, especially produce. You can freeze chicken, you can freeze steak, you can freeze shrimp but you cannot freeze produce,” he said.

The first week of operations was “really, really awesome,” according to Eligio, but now, he says things have slowed down. He believes that is because people are not staying home.

“People are getting tired of staying home and starting to come out more. The people actually staying home are the people who need to stay because they have compromised immune systems; well, they are afraid to go out,” he said. “It’s frustrating because I am here on Central Avenue and I see the traffic. I see Walmart, I see Kroger, I see Lowe’s and I mean it’s crazy the amount of people out and about.”

Eligio believes the biggest benefit to his operation is that it gives people another option. A way to avoid the sometimes crowded stores and panicked shoppers. He is also making sure he and his crew follow proper safety measures at the stand and on deliveries.

“We’re not just here; we deliver to people and we deliver everywhere. Not just the Hot Springs area but all the cities around Hot Springs (like) Arkadelphia, Malvern, Jessieville, Hot Springs Village, Pearcy and to everybody around. … ,” he said.

Down but far from out: Chefs get creative to save their restaurants amid shutdown – Los Angeles Times