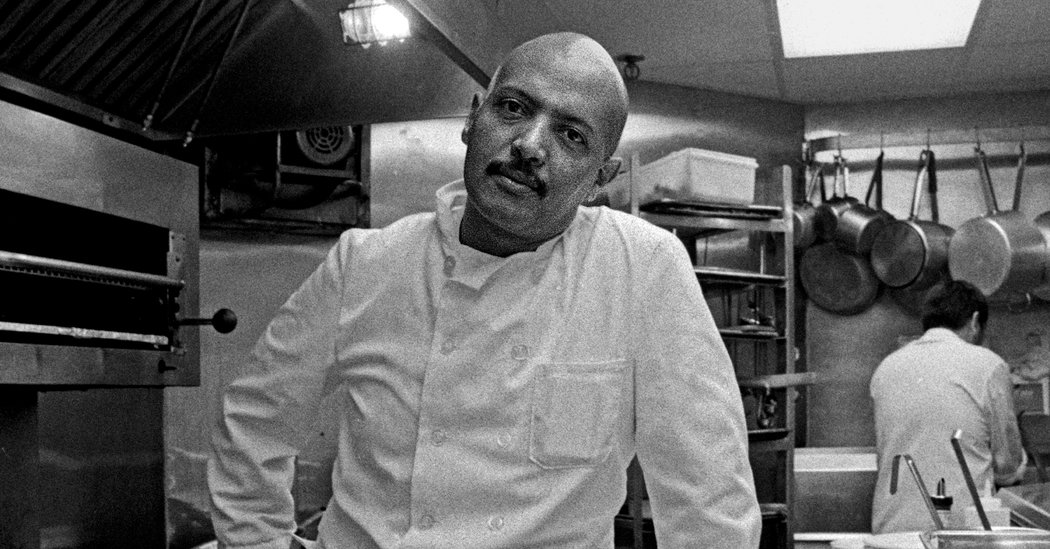 Mixing memories of his North African childhood with his day-to-day life as a husband and father in New Haven, Conn., Ficre Ghebreyesus conjured up an imaginary space of his own. He created this multilayered world in his studio, where, after his sudden death at 50 in 2012, he left behind more than 700 paintings and several hundred works on paper. And he performed a similar magic in the popular Caffe Adulis, where he earned his living by cooking hybrid recipes that drew on the culinary heritage of his native Eritrea and neighboring Ethiopia.

If, by some chance, a habitué of the Caffe Adulis ventured to Asmara, the capital of Eritrea, and sought a beloved dish on a local restaurant menu, disappointment usually ensued. “People would ask for shrimp in Eritrea, and it doesn’t exist,” said Mr. Ghebreyesus’s widow, the distinguished poet Elizabeth Alexander, who is the president of the Andrew W. Mellon Foundation. “The thing that was cool about Ficre as a chef is that to him it was making art. It’s like the dreaminess of the paintings. There’s something remembered and something invented.”

Mr. Ghebreyesus never exhibited his paintings publicly. “We disagreed about that,” Ms. Alexander said. “I now see that he just wanted to work. He thought that self-advocacy was inappropriate.” But she thinks he would be very pleased that Galerie Lelong in Chelsea is now representing him. “Gate to the Blue,” his first New York exhibition, was scheduled to open there in late April. Although the actual opening has been postponed until Sept. 10, the gallery has posted the images of the paintings in the show online.

One reason Mr. Ghebreyesus chose not to spend time promoting his painting was that he had lost a great deal of time already. “He went through so much with his upheaval,” Ms. Alexander said.

Born into a prominent Coptic Christian family in Asmara and educated in Catholic schools, he grew up in a strife-torn country at the beginning of Eritrea’s 30-year war of independence from Ethiopia. When he met Ms. Alexander in New Haven in 1996, they communicated their shared reverence for “The Diary of Anne Frank.” “We understood it in different ways,” she recalled. “He had soldiers breaking into his house.”

Mr. Ghebreyesus left Eritrea at 16 on a three-year odyssey, traveling to Sudan, Italy and Germany, before finding refuge in the United States. He settled in New Haven, where he and his two brothers opened Caffe Adulis in 1992. In 2000, he was admitted to the Yale School of Art. “He was certainly distinctive for how dedicated he was to painting,” said Pamela Franks, an art historian who knew him at Yale and is now director of the Williams College Museum of Art. “He was painting all the time.”

Like other refugees, he carried with him his loss, including the separation from his family and the pain of knowing the suffering in his homeland. His early paintings are often thickly painted nighttime scenes with a single source of illumination, such as truck headlights or a campfire.

“What I found in all Eritrean art is there is an element of darkness in it,” said Kassahun Checole, the publisher of Africa World Press and Red Sea Press, based in New Jersey. A native Eritrean, Mr. Checole met Mr. Ghebreyesus in New York, and they worked together politically for Eritrean war relief. “The depression that settles in all of us from our situation as exiles is expressed in the art,” Mr. Checole continued. “With Ficre, that was transformed when he met Elizabeth, moved to Connecticut, and his children were born. His art becomes more bright and hopeful.”

Indeed, Mr. Ghebreyesus’s distinctive talent as a colorist blossomed with his marriage to Ms. Alexander in 1997 and the birth of their two sons: Solomon, 22, and Simon, 20, who are both undergraduate students at Yale. As with his cooking, his sources as a painter were eclectic. The checkerboard motifs that he incorporated into many pictures bear a resemblance to the basketry and embroidery that he saw in his youth. The pinks and peachy oranges may derive from the colors of painted stucco houses in Asmara, a city that was occupied by the Italians in the 1920s and became a landmark of colonial modernism — like Mr. Ghebreyesus, a hybrid.

The saturated reds and blues of his paintings, however, seem indebted to the Western artists he loved, particularly Matisse. From Giotto’s Scrovegni Chapel, which he saw in Padua, Italy, to the modernist paintings and African sculptures that he studied during his frequent visits to the Yale University Art Gallery, Mr. Ghebreyesus absorbed everything he was exposed to. He was also passionate about music, with eclectic taste. “He would put together a playlist that would include music we knew and didn’t know — Nina Simone and then this incredible Ethiopian jazz mixed in,” said the musician Jason Moran, a friend.

Reticence confined Mr. Ghebreyesus’s reputation to his circle of devoted friends until his unexpected death. Complaining of feeling unwell a couple of days after his 50th birthday party, he continued working and exercising. No one recognized the seriousness of his ailment until it was too late. His younger son found him fallen off his treadmill, lying dead on the floor, of massive heart failure.

Three years later, after coping with the shocking grief and moving her family to New York, Ms. Alexander wrote a New Yorker article that was expanded in 2016 into a best-selling memoir, “The Light of the World,” making Mr. Ghebreyesus’s name more widely known. His art, though, awaited its audience.

A posthumous exhibition at a gallery in New Haven was followed by one at the Museum of the African Diaspora in San Francisco in 2018. After showcasing him at its booth at the Art Dealers Association of America fair last month, Galerie Lelong is presenting a selection of works that focus on Mr. Ghebreyesus’s unsettled traveling between worlds.

The most directly autobiographical painting, “Mangia Libro,” normally hangs in the Mellon Foundation headquarters. In it, Mr. Ghebreyesus depicts himself as a child, reading a book as he walks, with a dusky rose building behind him and water teeming with fish and seaweed in front. As often in Mr. Ghebreyesus’s paintings, there are abstract sections of checks and stripes, and enigmatic details.

Allusions to Eritrean culture abound in such paintings as “Angel and Musician,” which evokes the depiction of angels in Coptic Christian churches and the stringed lyre-like krar played by traditional musicians. One of the delights of this beautiful exhibition is the evident joy that Mr. Ghebreyesus took in the deft application of paint. The watery reflections of the banded vessel in “Solitary Boat in Red and Blue” create a shimmery, ghostly presence in the foreground, and the sea shifts without clear demarcation into a crepuscular streaky green sky. The interior of the vessel (similar in its hollow form to the used coconut shells that Mr. Ghebreyesus brought by the box from the restaurant to the studio) is an opalescent blending of thinly applied acrylic paint that divides into four softly distinct sections. The picture represents a boat in the ocean; but just as much, it is a bravura demonstration of paint handling.

The centerpiece of the exhibition is a huge painting, 16 feet by 8 feet on unstretched canvas, “The Sardine Fisherman’s Funeral.” A frieze of angel faces at the top, looking down on a scrum of human activity, plays against the focus of the painting: a gigantic fish propped up against a deep blue backdrop. And what are those two umbrellas doing here? Maybe their beautiful shapes are reason enough for their presence.

“I don’t look at them as biographical,” the Ethiopian-born American artist Julie Mehretu said of Mr. Ghebreyesus’s works. “They’re experiential paintings. They are explorations in paint. ”

Especially in these later paintings, he created an autonomous universe through the flattened picture planes, in which figures, fish, trees and geometric patterns jostle against one another in freewheeling abandon.

“With a lot of artists from the continent, the work is read as a history of the past and the time, and I don’t experience his painting that way,” Ms. Mehretu said. “It’s not tethered to who he was. There was a possibility that he imagined. And that is super interesting to me — that he untethered himself.”

‘You can’t run a team on empty’: how the restaurant staff meal is changing – The Guardian

‘Getting burgers delivered generally sucks’: Adam Liaw rates the best and worst food to order in – The Guardian