Running out of breakfast supplies? Vegan cook reveals how to make crispy bacon out of CARROTS – and she insists it has the same delicious crunch as the meaty favorite

By Charlie Lankston For Dailymail.com

With stores seemingly running low on a host of kitchen staples, people around the world are seeking alternatives to their favorite foods – and one vegan cook has come up with an incredibly creative option for anyone seeking to fill a bacon-shaped whole in their daily diet.

Vegan foodie and actress Tabitha Brown revealed how to make ‘bacon’ out of carrots in a TikTok recipe video that has taken the internet by storm, racking up more than 12.5 million views – and tens of thousands of comments from astounded viewers who are in awe of the results.

The recipe calls for just six ingredients, including the carrots, and North Carolina native Tabitha, 41, insists that it will yield a delicious plant-based alternative to bacon that has the same tasty crunch as the original. 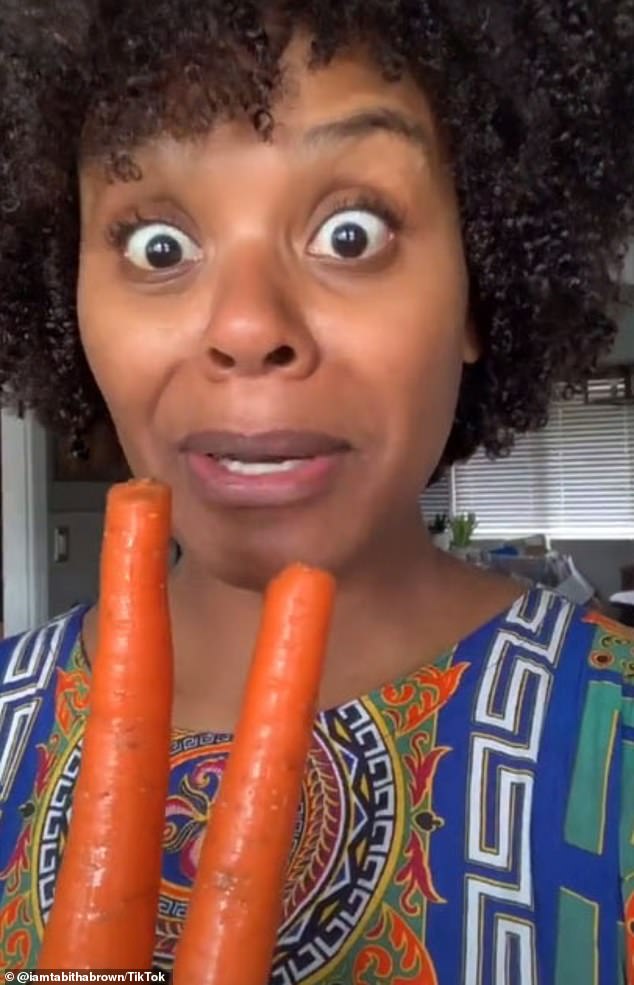 Presto chango! Vegan foodie Tabitha Brown has gone viral on TikTok after sharing a recipe for carrot ‘bacon’ that she says has the same delicious ‘crunch’ as the real deal 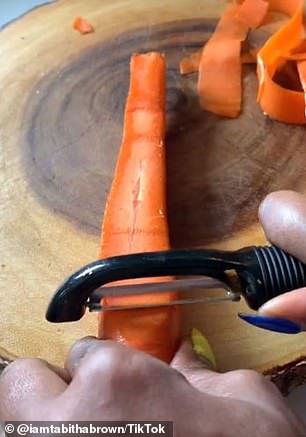 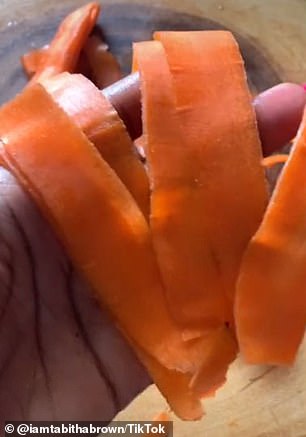 Step one: In her tutorial, the 41-year-old North Carolina native begins by slicing her carrots longways using a potato peeler in order to create bacon-like strips

‘Do you see carrots or do you see bacon?’ Tabitha asks at the start of the video, while holding up a few of the vegetables. ‘I’m about to make carrot bacon.’

She then takes a shaver – or a potato peeler – and begins slicing the carrots longways to create thin strips that have a similar shape to bacon.

‘See how it looks real thin?’ she asks while holding up the carrot strips, before adding. ‘Uh huh. Now you’ve got a few strips, but if you want more than this, then do that because that’s your business!’

But while it’s important to get your carrot strips just so, the key to this recipe is in the seasoning, which Tabitha whips up using just a handful of ingredients, all of which she mixes together in a bowl.

‘You’re going to need some liquid smoke,’ she begins, holding up a bottle of Wright’s Hickory Liquid Smoke, a product that is used to add a ‘slow-smoked flavor’ to your food in just minutes, without actually having to smoke whatever you are cooking for hours.

She then moves on to maple syrup and garlic powder – which she jokes has become a firm favorite among budding foodies in recent weeks, saying: ‘Don’t call it a comeback honey, he’s been here for years!’ 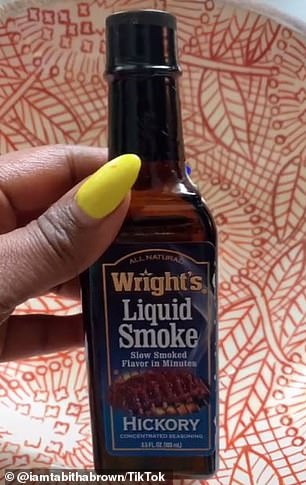 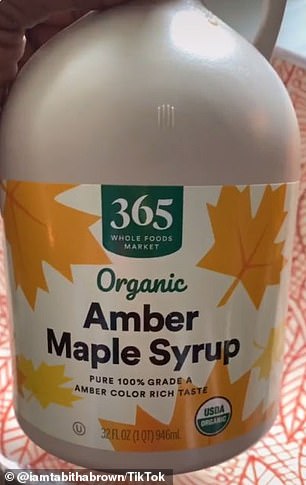 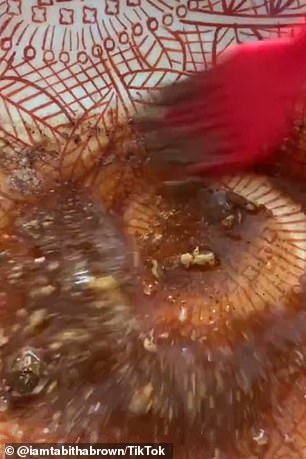 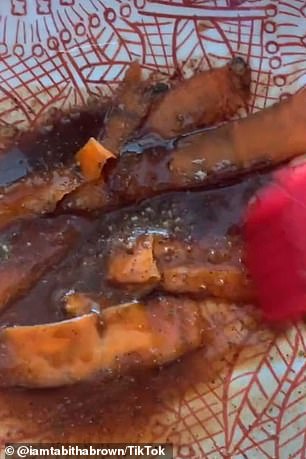 Stir it up! Tabitha adds all of the seasoning ingredients into a shallow bowl and mixes them together, before marinading the carrot strips in the mixture for two minutes

The final two ingredients are smoked paprika and ‘a little bit of onion powder with pepper’, which are both mixed into a shallow bowl with the other spices and seasonings.

‘This is your concoction for the carrots that turns it into the bacon,’ she says while mixing up the seasonings with a pastry brush.

Tabitha then adds the carrot strips to the mixture, and coats them thoroughly with her ‘concoction’.

‘Put the “bacon” in there and make sure it gets thoroughly seasoned,’ she explains. ‘You can leave it in there for about two minutes or so.’

Next up, you need to put your seasoned ‘bacon’ in to cook, with Tabitha noting that this can be done in an air fryer, or in the oven – both of which should be set to 380 degrees Fahrenheit.

Five minutes later, and you will be left with some deliciously crispy carrot bacon – which Tabitha even tastes on camera to prove just how crunchy it is. 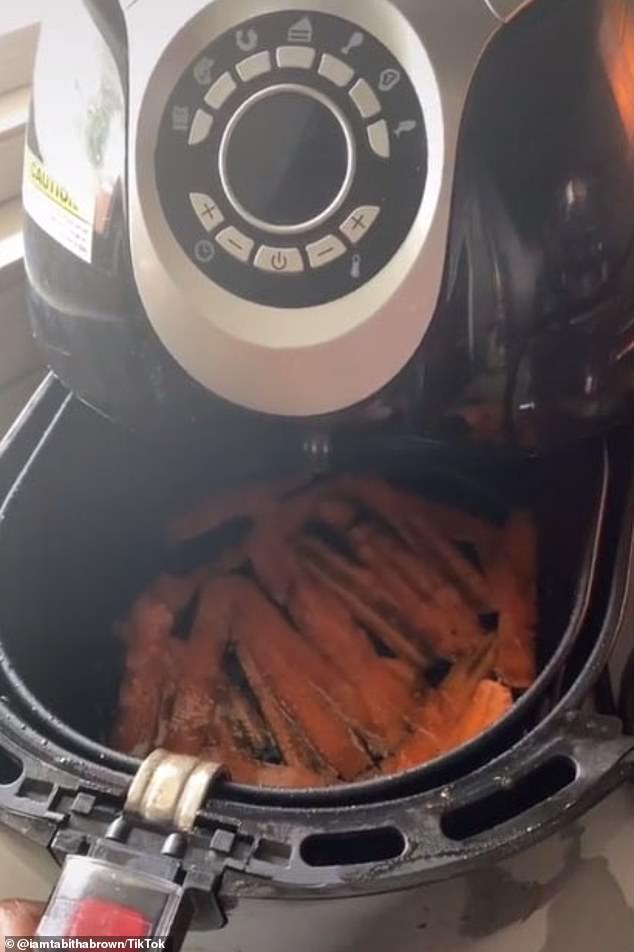 Hot hot heat: The foodie advises that you cook the carrot bacon in an air fryer or an oven, explaining that they should be cooked at 380 degrees for five minutes 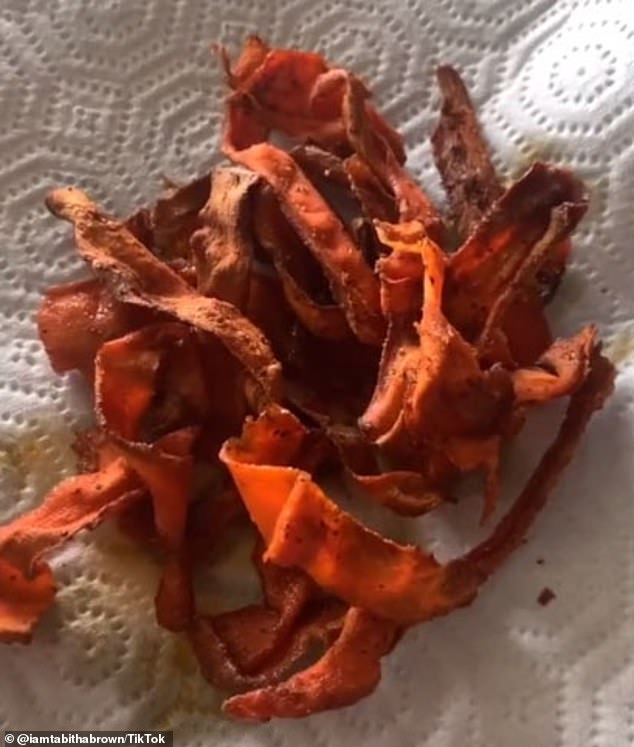 Voila! After just a few minutes of cooking, the ‘bacon’ comes out crispy and crunchy 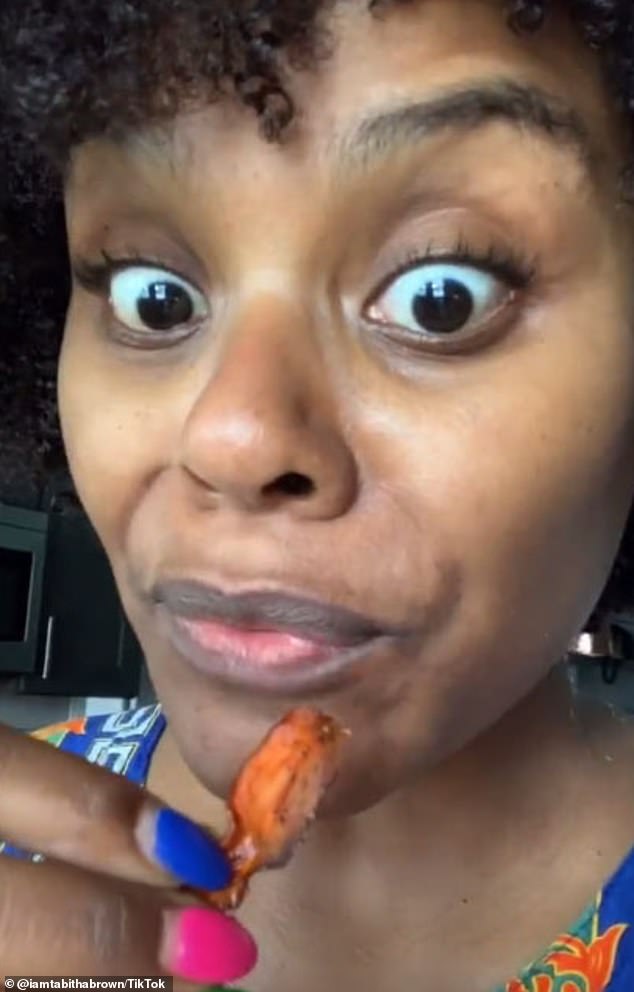 Delicious: The actress tests the carrot bacon on camera to prove how crunchy it is

‘Take it out and baby you got some bacon there,’ she says before popping a piece in her mouth. ‘Let’s check the crunch… Listen real good, yup!’

The TikTok star, who boasts 1.9 million followers on the social media app, prompted an outpouring of amazement in the comments section with her recipe – as tens of thousands of people shared their thoughts on her creation.

‘You need your own cooking show!’ one person wrote, while another added: ‘Oh dang I need that.’

Others praised Tabitha for her ‘soothing’ voice, joking that they had watched the video again and again simply to hear her talk.

Thankfully those people have plenty of other content to enjoy; the influencer regularly shares recipe videos on her page, while also posting the tutorials to her Instagram and Facebook pages – where they prove equally popular.

In the past few weeks, she has offered up recipes for everything from lasagna to tacos to hash browns, all of which are made with vegan ingredients.

79 Vegetarian Recipes for Meatless Meals in Every Season – Epicurious