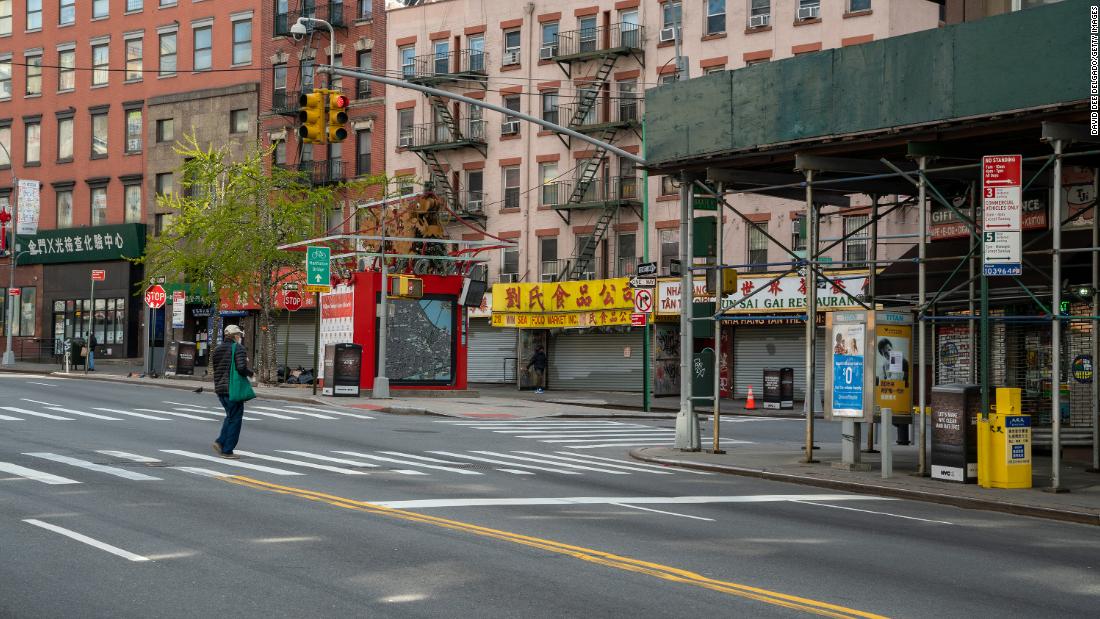 As of April 15, 59% of independent Chinese restaurants across America had completely stopped taking debit and credit card transactions, indicating they have ceased operations, according to Womply, a data subscription service. Womply tracks credit and debit card transactions to provide market insights to 10 million small businesses.
Restaurants across the United States are suffering under the business shutdowns in place because of the pandemic, but Chinese restaurants are by far the worst-hit segment of the industry, Womply reported.
Many Chinese restaurants won’t survive the coronavirus pandemic without targeted government intervention, advocates warn.
Prior to the coronavirus outbreak, 270 restaurants operated in New York’s Chinatown, according to Wellington Chen, executive director of Manhattan’s Chinatown Partnership Local Development Corporation. Only 40 remain open, Chen told CNN Business on Friday.
A large number of Chinese restaurants in San Francisco’s Chinatown neighborhood have similarly ceased operations, according to Malcolm Yeung, executive director of the city’s Chinatown Community Development Center. Yeung, who also serves as a board member for the local Chinese Chamber of Commerce, said San Francisco’s Chinatown usually has about 150 Chinese restaurants in business, but now only 40 remain in operation.
Although Chinese restaurants around the world have become synonymous with takeout and delivery, many traditional Chinese restaurants offer only dine-in service. Yeung and Chen noted many traditional Chinese restaurants in major cities’ Chinatown districts shun delivery services such as GrubHub, because those services charge high fees.
“These [Chinese restaurants] were on thin operating margins before,” Yeung explained. “Transitioning over to [tech] delivery is going to make that even thinner.”
Chen said he hopes Chinese restaurants will receive targeted relief funding and programs from the local, state and federal government. “If we don’t get the breaks, we cannot break even,” Chen said.
Congress is expected to approve a deal to replenish the federal government’s Paycheck Protection Program, which last month quickly depleted its $349 billion economic-rescue fund for small businesses. Some of those funds would be set aside for under-served businesses, including those run by minorities.
A large portion of the nation’s Chinese restaurants are independent and lack the capital reserves held by corporate chains, which may be better positioned to weather the financial storm from the coronavirus, said a spokesperson for P.F. Chang, which has more than 200 US restaurants.
The spokesperson said the Asian cuisine chain’s takeout and delivery business has “doubled in size” since mid-March.
“The model that every type of restaurant across our country must currently operate under is, fortunately, one that we know well and are exceptionally good at,” a P.F. Chang’s spokesperson said via email.

Who is Infamous Bitcoin Pizza Guy? Man Who Blew $365 Million Haul Says He Has No – News18