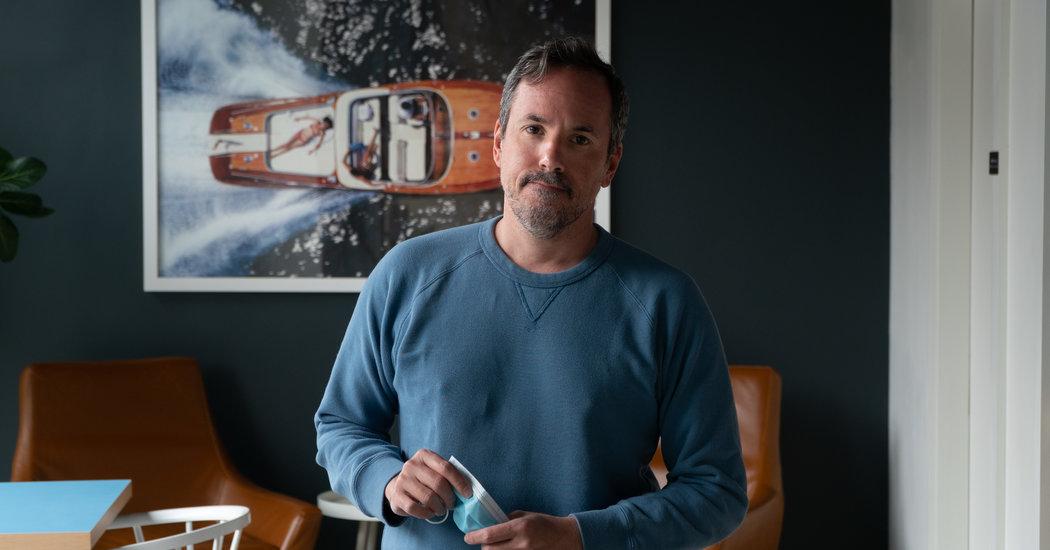 There are days lately when Renato Poliafito feels he is reliving a familiar old nightmare.

In 2012, when Hurricane Sandy drove the evening high tide onshore, Mr. Poliafito was an owner of a small bakery called Baked, in Red Hook, Brooklyn. Bay water ran through the neighborhood’s low-lying streets and into the basement of Baked, where it destroyed all the inventory and equipment.

Over the next few weeks, Mr. Poliafito and the owners of other small businesses huddled inside the bakery studying sources of federal and local aid. To apply, he needed documents that had been ruined by the flood. But Baked eventually got a loan for about $40,000 from the Small Business Administration.

Today, Mr. Poliafito owns a slightly larger Brooklyn bakery and cafe called Ciao, Gloria. Once again, he and other business owners are trading notes on grants and loans that might help them survive a disaster they didn’t see coming. But this time, he and his friends talk about their frustrations with an emergency S.B.A. program that ran through its entire $350 billion fund before any of them got a piece of it.

Now in the second month of compulsory closings, many owners of independent restaurants and bars across the country are starting to despair of getting the help they need to come back. They are confused, they are angry and they all know a dozen other small business owners just like them. The relief bills that have passed Congress don’t seem to be working for them, they are doubtful that a fresh injection of aid will solve their problems and other measures they favor seem to be going nowhere.

Mr. Poliafito had hoped that a loan from the S.B.A. fund, the Paycheck Protection Program, would allow him to reopen Ciao, Gloria by May 10, Mother’s Day. He applied for about $75,000 and was approved, he said, but was told that the fund had already run dry.

“It just seemed — corrupt is the word to use,” he said. The loans, he believes, went to “people who knew people, and things got pushed around.”

Shake Shack, for instance, a burger chain whose stock is currently valued at $1.6 billion, was given one of the loans, which have a low interest rate and can be forgiven if a business brings back enough employees to get its payroll to three-quarters of what it was before the pandemic.

After a public outcry, Shake Shack announced Sunday that it had found another source of money and would return its $10 million loan. It wasn’t the only publicly traded restaurant chain to get one, though. Ruth’s Chris Steak House received two, for a total of $20 million.

It turned out that more than one out of every four dollars in the fund went toward big loans of $2 million and above, thanks in part to lobbying from the National Restaurant Association. Nominally, that organization represents the whole industry. Many independent operators, though, feel that its victories tend to favor wealthier members rather than the unaffiliated places that make up the majority of the roughly 660,000 restaurants in the country.

Businesses bigger than Ciao, Gloria are struggling, too, Mr. Poliafito acknowledged. But funding for them “shouldn’t have been coming from the same pot,” he said.

Both Republicans and Democrats have complained about how much first-round funding was directed to large, publicly traded companies. On Tuesday, Congress and the White House reached a deal to pour another $310 billion into the Paycheck Protection fund, with $60 billion to be distributed by lenders that typically serve smaller businesses. Senator Chuck Schumer, the minority leader, said $125 billion of the money would go “exclusively to the unbanked, to the minorities, to the rural areas and to all of those little mom-and-pop stores that don’t have a good banking connection and need the help.”

Even so, Mr. Poliafito said, “I’m in panic mode because what if this second round does come through, and what if I’m still way behind all these Shake Shack-size borrowers who maybe need another $10 million?”

Nate Adler, who opened Gertie, a luncheonette in Brooklyn, almost exactly one year before the pandemic forced him to close his dining room, applied for a Paycheck Protection loan through his bank, JPMorgan Chase. On April 8, he got an email from the bank notifying him that the portal was open, he said. Immediately he filled in all the blanks and submitted the form.

Mr. Adler says he spent much of the next week leaving messages for Chase employees that were not returned. Last Friday, a banker told him that the money had run out, and Mr. Adler hadn’t made the cut. Later, he talked to other owners who had access to the site earlier, and who had their applications approved.

He is about to turn Gertie into a delivery-only soup kitchen that will send packaged meals to health care workers and people who have lost their jobs or homes. He had been hoping to pay its employees with a Paycheck Protection loan, but now he is soliciting private donations.

What strikes him most about the federal program, he said, is “the complete inequity in the way the loans were given out.”

“There was preferential treatment all over the board,” he said. “The process was confusing to begin with, and seemingly people with banking connections, or those using a smaller bank that has personal contact with people at the S.B.A., had a much greater chance of getting the loans.”

In several class-action lawsuits filed this week in the U.S. District Court for the Central District of California, JPMorgan Chase was one of four banks accused of giving preference to companies that applied for larger loans under the Paycheck Protection Program. Chase has denied the accusation in a page on its website answering frequently asked questions about the program.

Given the populist anger faced by Shake Shake and Ruth’s Chris, it is not surprising that restaurateurs who did get a loan tend not to broadcast it, even when the amounts are well under $10 million. Once the money flows into their bank accounts, though, they face their own set of problems.

Martha Hoover, who owns Cafe Patachou and several other restaurants in Indianapolis, said her company has already received the Paycheck Protection loan it requested. She would not disclose the amount, but said that the terms may compel her to hire more workers than she will be able to keep paying after the money is spent.

“I’m very fearful that the level of funding and the restrictions attached to the funding will not do anything to create a sustainable reopening,” she said. “If we reopen in June, we will not be back to numbers that even resemble close to what we need to operate our businesses. And then what happens?”

A Paycheck Protection loan can be forgiven; it becomes a tax-free grant, essentially. One condition, though, is that the money has to be spent within eight weeks. This may work for some businesses that are able to function at something close to normal capacity for the next two months. Most restaurants, though, won’t be able to do that for some time.

Even when they can reopen, they will almost certainly have to follow social-distancing protocols and other rules that have not been drawn up yet.

Some notions that Gov. Gavin Newsom has floated for California, like a mandate that restaurants seat no more than 50 percent of their capacity, were not encouraging to Ms. Hoover.

“Talk about a vibe killer, right?” she said. “I get it. Public safety is pre-eminent. I understand that.” Still, she and other owners agree that trying to pay a full staff out of the revenues from a half-empty restaurant is a quick route to more layoffs.

“The whole business model, the whole point of a restaurant, is to get as many people as possible into the space on a given night,” said Edouardo Jordan, who owns JuneBaby and other restaurants in Seattle.

This week, Ms. Hoover sued Hanover Insurance Group in Indiana State Court over its refusal to reimburse her for losses from Covid-related business interruption, a nearly universal problem in the restaurant industry. The chef Thomas Keller filed a similar lawsuit last month against his own insurer.

Together with Mr. Jordan, Dominique Crenn and other chefs, Mr. Keller has formed the Business Interruption Organization, an advocacy group demanding that insurance companies pay those claims.

“That is the faucet that needs to be turned on,” said Mr. Adler of Gertie. “Because it affects every single business without dealing with accessibility or preferential treatment or your business acumen.”

One possible solution is for the federal government to subsidize the insurance companies, but the idea has not taken root in Congress.

As lobbyists pitch fierce campaigns for federal aid to flow to their industries, the owners of small restaurants say they feel nearly powerless.

Ms. Hoover praised the James Beard Foundation and the Independent Restaurant Coalition, which was formed in March, for their efforts on behalf of restaurateurs. Still, she said, neither they nor any other group has been able to secure the help she and other small business owners say they need.

“I think there are a lot of good innovative ideas coming out of this, but nothing that we’ve been able to execute on,” Ms. Hoover said. “I’m living in real time here and I need to move forward.”

Mr. Jordan said he had a modicum of access in Washington, through his relationship with Mr. Keller, a former employer, who was invited by President Trump to sit on the Great American Economic Revival Industry Group.

But Mr. Jordan also said the group, chosen by the president, “is not a great representation of what America’s hospitality industry is.” It includes several other white male chefs of Mr. Keller’s generation, as well as the leaders of some large restaurant corporations.

“There has to be a say from the 11 million workers, the hundreds of thousands of small businesses that make up the hospitality industry,” he said. “Not just the major conglomerates.”

For small restaurants that were already a few slow nights away from bankruptcy, hopes of coming back grow more remote with every day they wait for help to arrive.

Mr. Poliafito remembers hopeless days after Hurricane Sandy, too. When government aid finally came through, though, it helped Baked and other businesses rebuild and return stronger than before.

“In a weird way, Red Hook flourished after Sandy,” he said. “I thought it was going to be the end of Red Hook, and it was the exact opposite.”

As he recalled how he had not only survived that earlier disaster but triumphed, Mr. Poliafito grew more animated. Then he returned to his current troubles, and the hope drained from his voice.

“We should be so lucky to have something like that happen now,” he said.