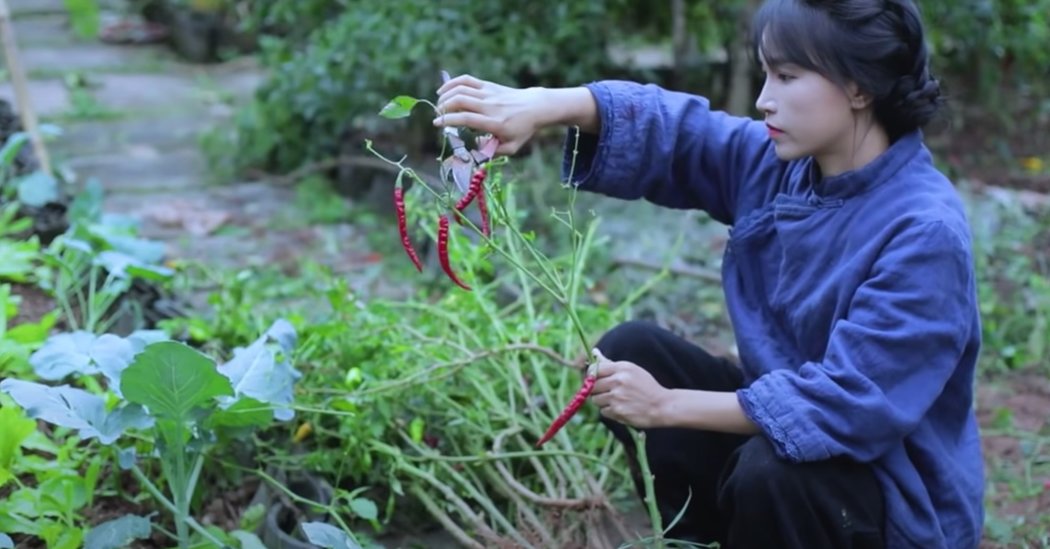 Like so many home cooks in quarantine, after I’ve used up the green tops of my scallions, I drop the white, hairy roots into a glass of water to regenerate, feeling pleased with my own sense of thrift and pragmatism.

But last week, after the Chinese internet star Li Ziqi posted a new cooking video to YouTube called “The Life of Garlic,” I wished I could graduate from scallions on the windowsill.

In the 12-minute video, which already has over seven million views, Ms. Li pushes garlic cloves into a patch of earth outside her home. A time lapse shows the sprouts growing, reaching up toward the sky.

Ms. Li sautées the young, fresh green garlic shoots with pork. When she harvests the bulbs, she plaits the stems, hanging them up to finish the drying process, pickling and preserving the rest, and using some to season chicken feet and dress salad.

Ms. Li, who lives in a village in Sichuan Province and rarely speaks to press, looks not unlike a Disney princess in her crown braids, wearing a silvery fur cape, trudging gracefully in the snow. At 29, she is famous for her mesmerizing videos of rural self-sufficiency, posted on Weibo and YouTube.

For a worldwide audience in isolation, her D.I.Y. pastoral fantasies have become a reliable source of escape and comfort.

I usually plan to watch one — just one — but then I let the algorithm guide me to another, and another, until, soothed by bird song and instrumentals, I’m convinced that I’m absorbing useful information from Ms. Li about how to live off the land.

If I’m ever stuck with two dozen sweet potatoes, I now have some idea how to extract the starch and use it to make noodles. This is what I tell myself. Leave me alone in a lotus pond, and I know how to harvest and prepare the roots.

Ms. Li doesn’t explain anything as she goes. In fact, she tends to work in silence, without the use of any modern kitchen gadgets. Her sieve is a gourd. Her grater is a piece of metal that she punctures, at an angle, then attaches to two pieces of wood. Her basin is a stream, where she washes the dirt from vegetables.

Her kitchen is nothing like mine, in Los Angeles. But watching Ms. Li on my laptop, while eating a bowl of buttered popcorn for dinner, I think maybe I could be happy living like that, too, soaking in the sheer natural beauty of the countryside, devoting myself to extremely traditional ways of cooking.

She is not known for taking shortcuts. A video about matsutake mushrooms begins with her building the grill to cook them, laying the bricks down one at a time, scraping the mortar smooth, then hunting for mushrooms in the woods.

In a video about cooking fish, she first goes fishing, in the snow, patiently throwing back any catches that are too small, as snowflakes freeze into her hair.

Like the main character in some kind of post-apocalyptic novel, Ms. Li is almost always alone, though she doesn’t seem lonely, riding her horse through fields of wildflowers, or carrying baskets of sweet potatoes under citrus trees. She seems tireless, focused, confident, independent.

The videos are deeply soothing. But it’s not just that — they reveal the intricacy and intensity of labor that goes into every single component of every single dish, while also making the long, solitary processes of producing food seem meaningful and worthwhile.

It’s the complete opposite of most cooking content, the kind that suggests that everything is so quick and easy that you can do it, too, and probably in less than 30 minutes.

But Ms. Li also romanticizes the struggles of farm life, and, as any savvy influencer would, monetizes that appeal. In her online shop, she sells a curved cleaver, similar to the ones she uses in her videos, as well as loose Hanfu-inspired linen clothing, Sichuan ginseng honey and chile sauces.

Skeptics are suspicious of her access to YouTube in China, where the platform is blocked. And though it seems unlikely, some people have wondered in the comment sections if her videos are propaganda.

Ms. Li’s story, as she tells it, is that she left home as a teenager to find work, but returned to the countryside to take care of her grandmother, then began documenting her life. Though she used to shoot her videos alone, on her phone, she now works with an assistant and a videographer.

“I simply want people in the city to know where their food comes from,” Ms. Li said, in a rare interview with Goldthread last fall. (She never responded to my requests.)

But most of the world’s food, whether in China or the United States, doesn’t come from anyone’s backyard, and isn’t made from scratch. Noodles are produced and packaged in factories. Chickens and pigs are gutted on fast, dangerous lines.

The fragility of our industrial supply chains, and the immense risks for the people who work in commercial plants and slaughterhouses, have been laid bare in the last few weeks.

Ms. Li sidesteps the existence of that broken system entirely. This is the powerful fantasy of her videos right now — people growing and cooking all of their own food, not wasting anything, and not needing anything more than what they already have around them.

In isolation, watching Ms. Li gather rose petals and ripe tomatoes, I catch myself thinking, is this sequence set in the past, or the future? Are these videos a record of the collective food knowledge we’ve already lost, or an idealized vision of its recovery?

Can I go to a restaurant or pub with friends in tier 2? The rules on eating meals out in each Covid tier – iNews