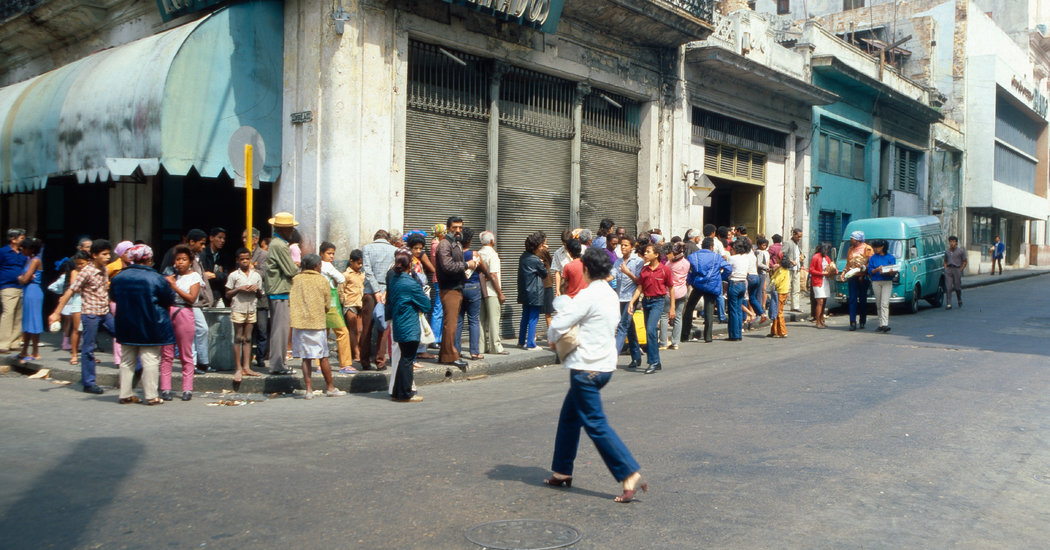 First, it was the hand sanitizer. Then, Clorox wipes, alcohol, thermometers and Tylenol vanished from the shelves. Soon after, the toilet paper was gone, and then the rolls of paper towels and the napkins, and all the cleaning products. After that, items that had nothing to do with disinfecting surfaces began disappearing as well: boxed unsweetened almond milk, cucumbers, and my favorite sugar-free bar of chocolate. Yesterday, we couldn’t get bacon in our local supermarket or Cookie Crisp cereal or honey ham, which my boys like.

In the past few weeks I’ve found myself momentarily standing in line to shop for food (with proper social distancing and under the Florida sun), wondering if certain items would run out before my turn came, before ditching the line and deciding to go elsewhere. After the White House coronavirus task force warned against even going out to buy groceries or medication, I’ve studied the pantry, trying to calculate how much longer until we have to start rationing food.

I’m not obsessed with food, nor am I a hoarder. The coronavirus has just triggered what a dear friend from New York calls a “cultural memory.” It’s an especially relevant one this year when I’m celebrating my 40th in the United States.

It was 40 years ago next month that I left Cuba with my family in what came to be known as the Mariel boatlift — the biggest mass exodus by sea the hemisphere has seen in recent history. We left in a boat called Mañana, arriving in Key West on May 11, the day that, coincidentally, more Cubans arrived than any other day of the five-month-long boatlift that in total brought more than 125,000 refugees to South Florida.

Most of those Cubans, when asked why they had left their country, mentioned the obvious reasons one flees a dictatorship — a desire to be free and a yearning for personal growth — but I’m sure that even if they didn’t mention it, they were also craving ready access to all the food they could possibly eat.

That’s because in the Cuba of the ’70s, the Cuba I grew up in, there were severe food shortages. Many think that Cuba’s problems with food began with the fall of the Berlin Wall, once the Soviet Union stopped subsidizing the Cuban economy. But in the ’60s and ’70s — the years when much of the world was looking at the island as a beacon of progressive thought and lofty ideas — most Cubans didn’t get enough food, toothpaste or toilet paper to get them through the month.

I remember standing in endless lines for potatoes only to be told, when it was finally getting close to my turn, that the potatoes had run out. I remember craving a ham and cheese sandwich. I remember running downstairs when I heard the sound of the ice cream truck, relishing the thought of a strawberry cup or a chocolate bar, and finding out they had only melted gallons of vanilla. The freezers were broken. Again. They were out of strawberry. Again. Eventually, the ice cream trucks disappeared altogether.

I remember wanting desperately to eat fish and not being able to find one anywhere. Imagine that. We were surrounded by water, and yet, there was no seafood. I’d sometimes dream of apples. I’d wake up just as I was about to bite into one, perhaps because I lacked imagination to conjure up the taste, never having seen an apple except in the movies.

In time, I came to understand that talking about food — the yearning for certain kinds of food — was safer than talking about other needs. Food was a metaphor for our more pressing, but forbidden, needs.

I know a couple who told me they left the island the day Fidel Castro announced that milk production was low and, therefore, there would be a shortage of butter that year. My friend looked at her husband and said, “Fernando, we have to go, I can’t live without butter.”

My friends were artists. By the time milk became a problem, artists had been ostracized, priests and nuns had been exiled, religious schools had been closed, and many who opposed or simply didn’t obey the dictates of the revolution had been jailed, executed or sent to reform camps. It’s possible that the looming lack of butter was the trigger that prompted their departure, but I know their angst and needs ran deeper.

About 18 years ago I interviewed my parents for a book I wrote about the boatlift. They were 20 when Fidel Castro came to power and 40 when they left Cuba. I asked them how they could put up with the scarcities and the repression for so long. How could they bear wasting their best years standing in endless lines for meager rations and quashing their true selves?

My mother told me that they had learned to live with it. “It didn’t happen all at once, you see,” she said. “One day you go shopping and you find there is no soap, but you hope it’ll come another day and you go on. The following week, there is no chicken, so you don’t make a soup, you make something else, and you hope things will get better. And life goes on and the years pass. Then, suddenly, 10, 15 years later, one day you realize there is no food in the pantry, no shampoo, all your friends have left and you’ve lost your freedom. By then it’s too late.”

I think about that now, as I contemplate the empty shelves in the supermarket aisles. Everyone is quiet, wearing their masks, as we all should, and keeping our distance, as we’ve been told to do. The herd behavior both soothes and unnerves me.

On a recent trip to the grocery store I asked the manager where the cucumbers were. He told me I needed to get there earlier. What about the chocolate? He didn’t know about the chocolate. I wrote an email to the company in Minneapolis, asking if they stopped producing the unsweetened cocoa bars I like because of the pandemic. “No,” someone wrote back right away. “Ask your store manager.”

I will again, when I return. But for now, I’m ordering my groceries online. I can’t bring myself to stand in line for food again. I hope I won’t have to. I pray it won’t come to that. Adapting to a new normal can be a good thing or a slippery slope. First, the good mustard on aisle two disappears. Then, what’s next? What else are we expected or willing to live without?

Mirta Ojito (@MirtaOjito), a former reporter for The Times, is the author of “Finding Mañana: A Memoir of a Cuban Exodus.”

Is it Safe to Eat Out, Grocery Shop in the Age of Coronavirus? – VOA News