“It has never happened since it saw the light of day, that in Naples, pizza couldn’t be found,” says Luciano Pignataro, a journalist in the Italian city where pizza was born.

“Not in the Neapolitan Revolution of 1799, the fall of the Kingdom of the Two Sicilies, the two World Wars, during the cholera period, nor the Camorra war,” he continues. Not until now.

Pignataro, who works at the more than 100-year-old Il Mattino newspaper, has written about the gastronomy of the Campania Regions for more than 30 years, closely following the sociocultural and economic effects pizza has had on the city and its citizens.

Fried, folded, wagon wheel or with a filled crust, the simple food is an emblem of Naples, an historical and cultural symbol, and a constant presence in public life.

But, as the coronavirus pandemic spread across Italy and quarantines were imposed, on March 13, the ovens of Neapolitan pizzerias across the city were turned off for the first time when regional authorities banned the sale and take-away of any food.

More than a month later and parts of Italy are taking slow steps towards business-as-usual. Food sales in Naples are set to resume, but for the city’s pizzaiolos and citizens whose identities are intertwined with pizza, the pandemic shutdown brought a more existential crisis.

‘I dreamt of pizza’

Naples is the Italian city with the highest number of pizzerias – more than 900.

In the collective imagination, pizzaiolos’ savoir-faire is the wheel that keeps the magic happening. However, their jobs are now on hold.

“Just last night I dreamt of a pizza that I was making for myself,” says Salvatore Di Matteo, who runs the family business Di Matteo pizzeria, opened by his great grandfather in 1934.

Very often, pizzaiolos are the ones who eat the least pizza, as they work with it every day, but Salvatore does not fit that description. “Like every pizzaiolo, I have to test and taste both the dough and all the products, but I also eat one pizza a day, because I really do like pizza.” 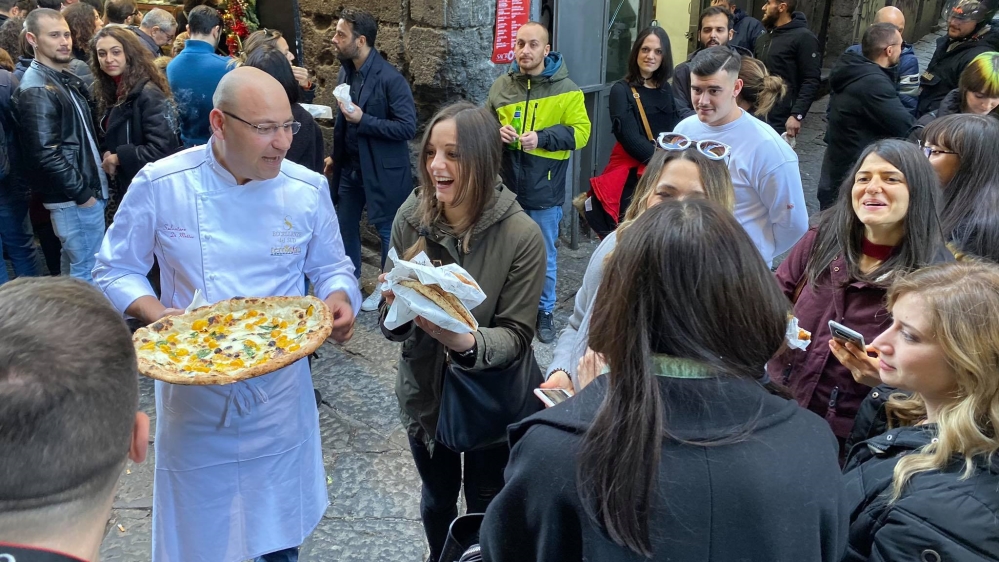 Di Matteo is struggling with not being able to make his pizza.

Located in the historical centre of Naples, during the G7 in 1994 the pizzeria received a surprise visit from former United States President Bill Clinton, who was televised biting into a pizza offered by Salvatore’s father.

“Twenty-six years ago social media did not exist and news did not travel as fast as now. That moment was the recognition of the Neapolitan pizza in the world and gave a lot of pride and publicity to all us pizzaiolos,” he says.

In normal times, lines can form outside some of the most popular pizzerias half an hour before they open. And if you are undecided about which pizza to choose, Di Matteo makes it simple with the “Four flavours” menu option – where each quarter of pizza is topped with the four traditional flavours: Marinara, Margherita, Sausages and friarielli, and Ricotta and cicoli (dried pork fat).

“I miss all the aspects of my job,” he says, “the queue outside and seeing our customers satisfied. But also the unforeseen circumstances that occur during the day … those small things felt like a habit. But with the lockdown, we realised that it is a part of who we are and that being a pizza chef is a life choice.”

In order to urge citizens to stay home, Di Matteo closed one day earlier than the regulations required. “This restriction served us to avoid something that might have been irreparable,” he says.

At the same time, however, he finds it counterintuitive not to be able to make pizzas in Naples. The owner also of a pizzeria in Rome, where the business is running as usual, he gets some validation from that, as well as through messages of support from his most loyal customers in Naples.

“To those who write to me, I can only say that even the pizza is in quarantine,” he says.

‘A psychological need for pizza’

The word pizza first appeared in the Neapolitan dialect in the 16th century: At that time, it was just simple fried round dough – far different from what we know it as today, writes Sylvie Sanchez, a researcher of anthropology at the CNRS in Paris, in her book, Pizza, Culture and Globalisation.

From there, the dish evolved: Tomatoes were introduced in the 18th century, and the development of leavening processes brought the Neapolitan style pizza.

“Pizza nowadays is a luxury accessible to everyone, while before, it was the food of the poor people,” says journalist Pignataro. 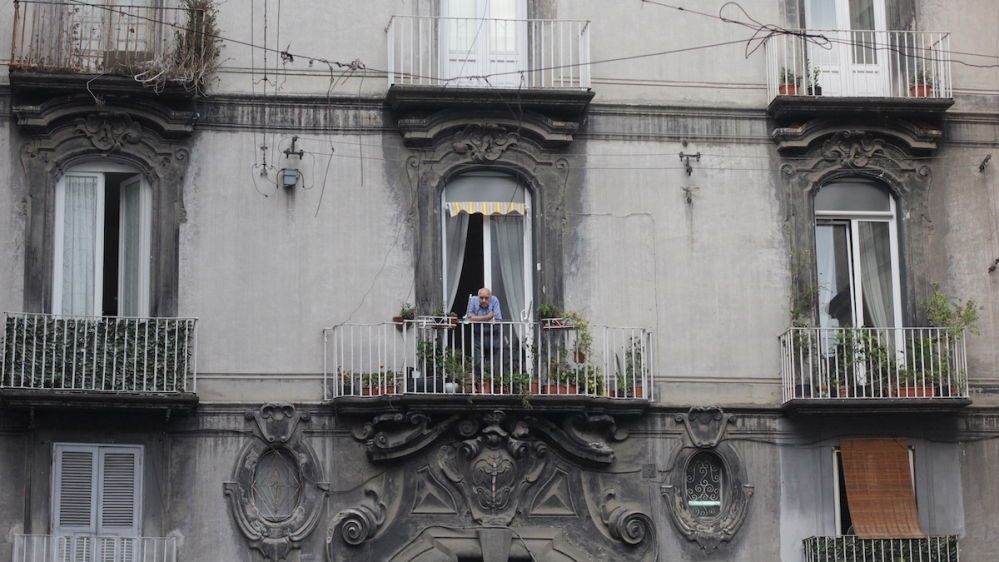 After World War II in Naples, making pizza was considered a woman’s job – a way to supplement the family’s income. The most famous depiction of this is a young Sophia Loren in the 1954 movie, The Gold of Naples. While getting her hands dirty selling fried pizzas stuffed with ricotta cheese or cicoli, behind her a sign mentions the policy once adopted to relieve the poorest from imminent debts: “A ogge a otto,” meaning “I will eat it today and pay for it in eight days.”

Until now, in those narrow Neapolitan alleys, one can still find women with more than 50 years of experience on their shoulders, raising the shutters of very simple shops, turning on their stoves where boiling pots of oil are ready, in order to deep fry pizzas and sell them at still popular prices.

“What we are experiencing in these lockdown days with the suffering is not post-war hunger,” Pignataro explains. “People ate it also to get stuffed for the day. Now, for us, it is truly a psychological need rather than a physical one.”

On average, Neapolitans consume a pizza a week, and one could say that no matter the occasion – big or small – there is always pizza present.

“We are used to walk[ing] downtown holding a folded pizza or a freshly fried pizza collected in the side alleys of the city,” says Valentina Fiore, a doctor at a private clinic in Naples.

Even writer and statesman Johann Wolfgang von Goethe wrote that Neapolitans are obsessed with food, and that could be because of their history. The older generations have survived the wars, the earthquake of 1980, and the eruption of the Vesuvius in 1944 – a still active volcano which represents a constant simmering threat.

Deeply superstitious, many Neapolitans rely on amulets and trinkets to ward off death or bring good luck – amulets tourists can also find in knick-knack shops in the city.

However, for most, what works best during hard times is food, which represents life, consolation and the only way to find the strength to survive the misfortunes that cyclically show up at their doorsteps. 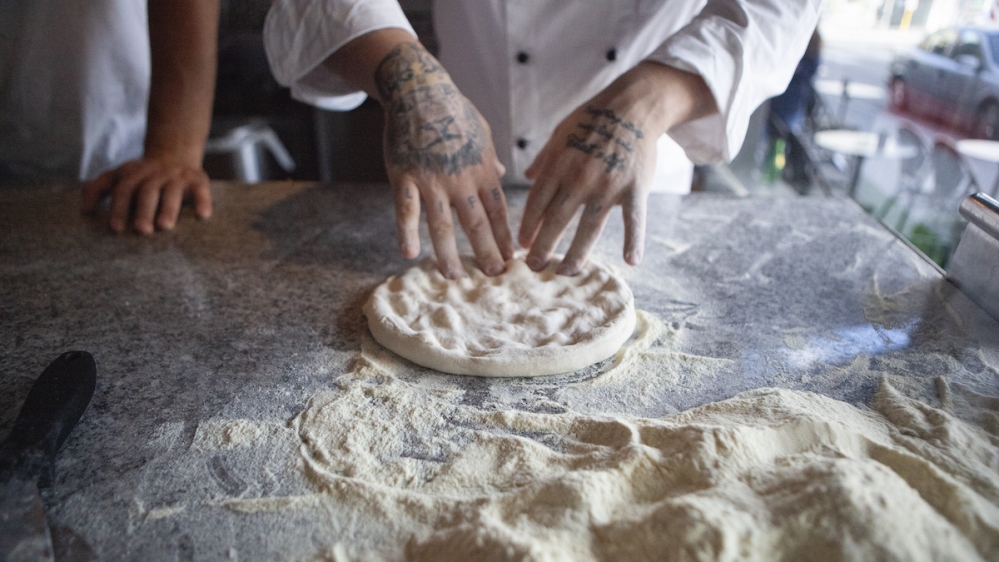 The coronavirus pandemic gave Neapolitans yet another reason to put all their efforts into making food.

“We do it in order to exorcise fears, because by cooking, one somehow puts all the love one has and tries to pass it on to those close to them,” says Fiore.

Rolling up their sleeves, Neapolitans are responding by doing what they are most known for – the art of making do.

During their lockdown weeks, families have been trying to keep up with their pizza cravings and habits by making it for themselves at home. Some use their grandmothers’ recipes, others follow famous pizzaiolos’ online tutorials, while the most skilled ones say they can feel when the amount of flour is just enough.

Fiore often has night shifts in the clinic, which she describes as being tough these days. As the weekend approaches, she manages to rest by making pizza.

“Personally, it relaxes me and I think a lot of people that are kneading can blow off some steam in this way. It is a positive aspect of the lockdown,” she says.

‘Pizza is a synonym of freedom’

If Alexandre Dumas in 1884 wrote that pizza was “the gastronomic thermometer of the market”, in the pandemic of 2020, the temperature measurement is being tricked.

“The ones we make at home have no comparison with the real one,” says Fiore. “In a way we are trying to deceive ourselves and to survive this lack.”

Fiore compares the quarantine with the time when she was studying for her university exams at the Faculty of Medicine: She used to stay home for weeks and, afterwards, reward herself with a pizza and social time with friends. “For me, pizza is a synonym of freedom, I would say that to me it tastes like happiness.”

Pignataro’s most nostalgic memories come from his late-night shifts at the newspaper, just a few steps away from the promenade of Naples. 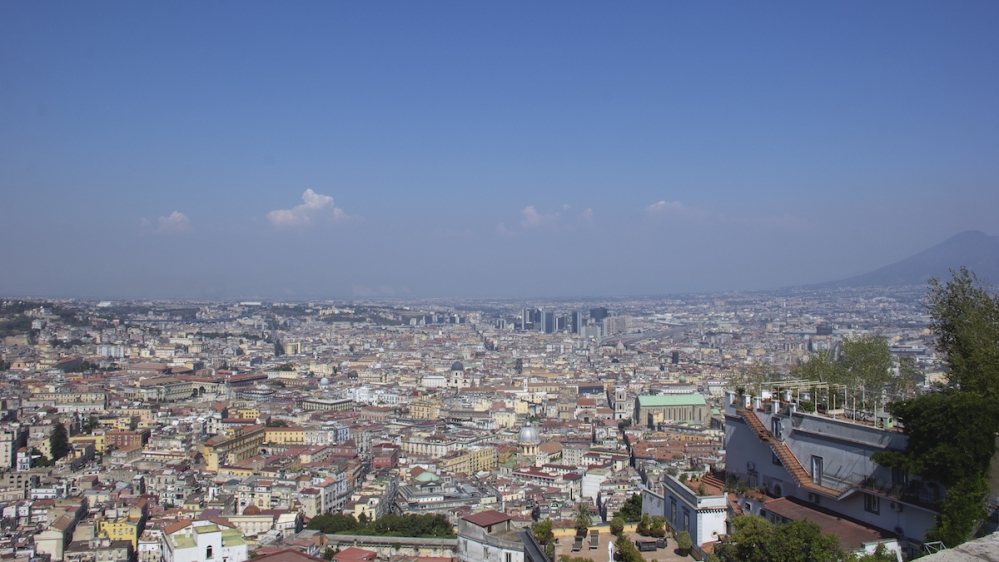 “During those times we used to call the pizzerias at 11pm and the delivery guy would scooter his way up to the office. The smell of pizza would spread all over the newsroom and we could find the energy to keep working for the rest of the shift.”

Not being able to eat it in their favourite pizzeria is what many Neapolitans miss the most, and everyone already knows where they want to go to eat it once the lockdown is over.

Fiore dreams of La Notizia 94, a pizzeria on top of the Posillipo hill. Pignataro wishes to eat the thinnest, largest and most famous pizza in Naples, the so-called “pizza a ruota di carro” (or “wagon wheel pizza”) at Da Michele.

Holding onto memories and kneading dough in their own kitchens as consolation, Neapolitans across the city are keeping their love for pizza unmuted and alive.

And perhaps this was a necessary step in the evolution of Neapolitan pizza: Once made in the streets and alleys, then in pizzerias, and now in family kitchens – its presence fills the city streets even when there is no one else around.