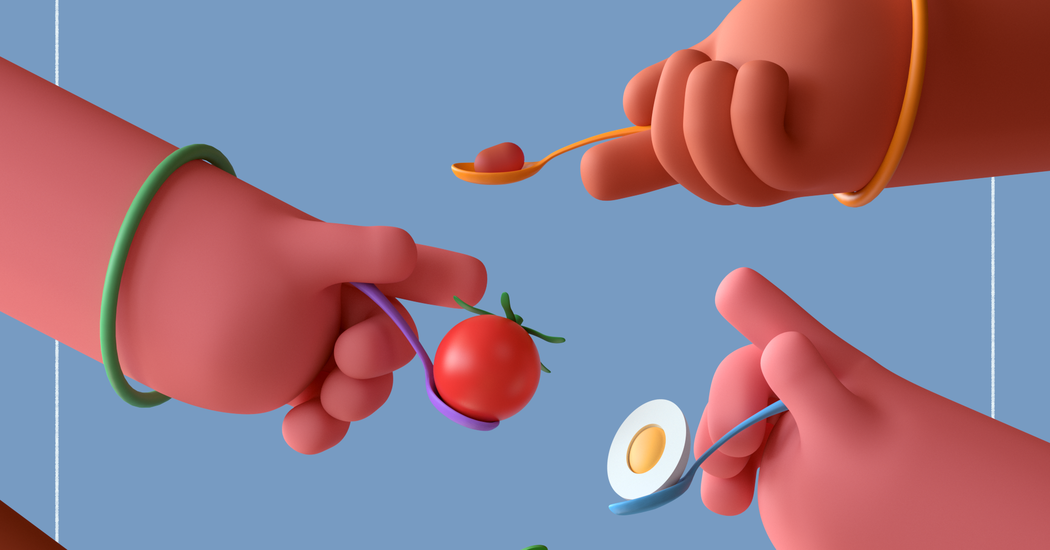 This guide was originally published on May 31, 2019 in NYT Parenting.

People follow a vegetarian diet for many reasons: cultural or spiritual values, a concern for animal welfare, a dislike of meat or, simply a desire for a healthier life. And just as vegetarian diets can be nutritious and safe for adults, they can be nutritious and safe for babies and toddlers, too. Our babies’ first foods, after all, tend to be cereals, mashed vegetables and puréed fruits.

To determine a basic plan for safely feeding your young child a vegetarian diet, I reviewed health guidelines and research. I also interviewed a pediatrician, a dietician and a vegetarian blogger, as well as a number of parents who are raising their children as vegetarians or as vegans.

[How to teach children about healthy eating, without food shaming]

Decide what kind of vegetarian diet is best for your child.

There are many kinds of vegetarians, from those who only eat fruit, nuts and seeds, to pescatarians, who avoid all animal protein sources except for fish. Our guide addresses two general types of vegetarians:

Dairy and eggs provide many of the same nutrients as fish and meat, so lacto-ovo vegetarians are less likely to develop vitamin and mineral deficiencies than those who avoid eggs and dairy products.

Vegan: Vegans do not consume animal products of any kind, including dairy, eggs or honey.

Pay attention to key nutrients that vegetarian or vegan diets may lack.

Vitamin B12: Vitamin B12, which has an important role in cell growth in our bodies, is only found in animal products, including dairy and eggs. Children on vegan diets need supplements or fortified foods, such as fortified cereals or fortified soy milk.

Vitamin D: Our bodies produce vitamin D in response to sun exposure, but because we slather on sunscreen to protect our skin from harmful ultraviolet rays — and an infant’s skin is more vulnerable to sun damage than an adult’s — most of us do not get enough vitamin D. Vitamin D, which is important for bone growth and helps regulate our immune systems, can be found in fortified cow’s milk and, increasingly, in fortified soy milk.

Calcium: Calcium helps us build strong bones. The easiest and most convenient source of calcium is cow’s milk, but it can also be found in fortified soy milk, nuts, beans and leafy green vegetables such as broccoli.

Iron and zinc: Iron is essential for our red blood cells, and zinc supports our immune systems. Both can be found in black beans and dark kidney beans, but our bodies absorb iron and zinc from animal sources more readily than from beans and other plant-based foods.

Protein: Nuts, tofu and vegetables are excellent sources of protein, but they are not necessarily as dense or as rich in certain amino acids as animal-based protein sources.

Essential fatty acids: Essential fatty acids such as Omega-3 are important for growth and must be consumed since our bodies don’t produce them. They are commonly found in fish, but vegetarians can also find them in flaxseed oil, walnuts and some seeds.

Feed your vegan or vegetarian child a well-balanced diet and plenty of calories.

All children need a healthy combination of vegetables, fruit, whole grains and protein. Since vegetarian children tend to get less protein than children who consume animal products, parents should aim to offer a form of protein — such as tofu, beans or nuts — with every meal, recommended Kristi King, a senior dietitian at Texas Children’s Hospital in Houston, and the national spokeswoman for the Academy of Nutrition & Dietetics.

Another concern for young vegetarians is feeling full before they’ve consumed enough nutrition or calories, said Dr. Lee Atkinson-McEvoy, a pediatrician at UCSF Benioff Children’s Hospital. A cup of broccoli, for instance, has less calcium than a cup of milk, so a vegan child would have to eat many cups of broccoli to take in the same amount of calcium. Some plant-based foods such as beans are also bulky, so children may feel full after eating relatively few calories. It is more difficult for our bodies to absorb calcium, iron and zinc from plant-based foods than from meat and fish. Since infants and toddlers are experiencing so much growth and development, parents need to be careful that their children get enough nutrients and plenty of calories.

Use supplements and fortified foods to help fill any nutritional gaps.

If your child is consuming milk and eggs — and a healthy mix of vegetables, fruits, proteins and whole grains — then supplements aren’t necessary.

Children on a vegan diet will need to get enough B12 through supplements or fortified foods, such as fortified cereals, soy milk or baby formulas. Another source of B12 is fortified nutritional yeast, which can be added into meals such as pasta and lasagna.

Parents may also want to consider iron drops and vitamin D drops, since vegetarian children can be at risk for low iron and vitamin D.

Survive your child’s picky phase with experimentation (and patience).

Vegetarian or not, your child is likely to go through a picky phase and to refuse certain foods based on their color, texture or taste. Calcium consumption also tends to drop when children wean, since they need to adjust to drinking milk from a cup instead of the breast or bottle, said King.

Be patient and allow your child to explore new foods. If she seems averse to a particular texture, try offering the food prepared in a different way: Chickpeas, for instance, can be served whole, cooked, fried or as hummus. Fruits and vegetables can be blended into smoothies. Foods can also be combined in ways that may make them more appealing. When her daughter started solids, Sandhya Nankani, a vegetarian who is also raising her daughter as a vegetarian, fed her rice and dal, which is made of lentils and high in protein. When her daughter was about 1, she began eating yogurt with ground flaxseed for breakfast, supplying her protein (yogurt) and essential fatty acids (flaxseed).

There’s the ideal, and then there’s the reality: when my daughter refused milk and yogurt after weaning, I gave her chocolate milk. And though there are well-founded concerns about childhood obesity, young children generally need more fat and calories than adults for growth.

Keep trying and provide nutritious snacks in between meals. If your child is older, you can also encourage your child to help you cook by washing vegetables or measuring ingredients. Having a role in selecting and preparing food helps give children a sense of ownership over dietary choices.

Talk to your child about your food choices.

Your child may begin to question your food choices once he begins eating meals with other children. Parents can help by talking about their reasons for choosing a vegetarian or vegan diet. Nankani has talked to her child about famous vegetarians like Albert Einstein and pointed out animals, like horses and elephants, that are large and strong while living on plant-based diets. Eric Brent, whose family is vegan, will pack his daughter, now 10, special vegan treats such as banana bread with chocolate chips, which she shares with her friends. “It does take a little bit of work,” he said. “But she’s never felt like she’s missing out.”

There are times when parents should consult their child’s pediatrician and seek advice from a nutritionist:

Ellen Lee is a freelance journalist and parent of three. A former staff writer for The San Francisco Chronicle, she has contributed to parenting publications including Working Mother, Family Circle and Wirecutter’s baby and kids section.

Maine bakery a recipient of The Barstool Fund – NewsCenterMaine.com WCSH-WLBZ

A Smart Guide to Restaurant Takeout – The Wall Street Journal