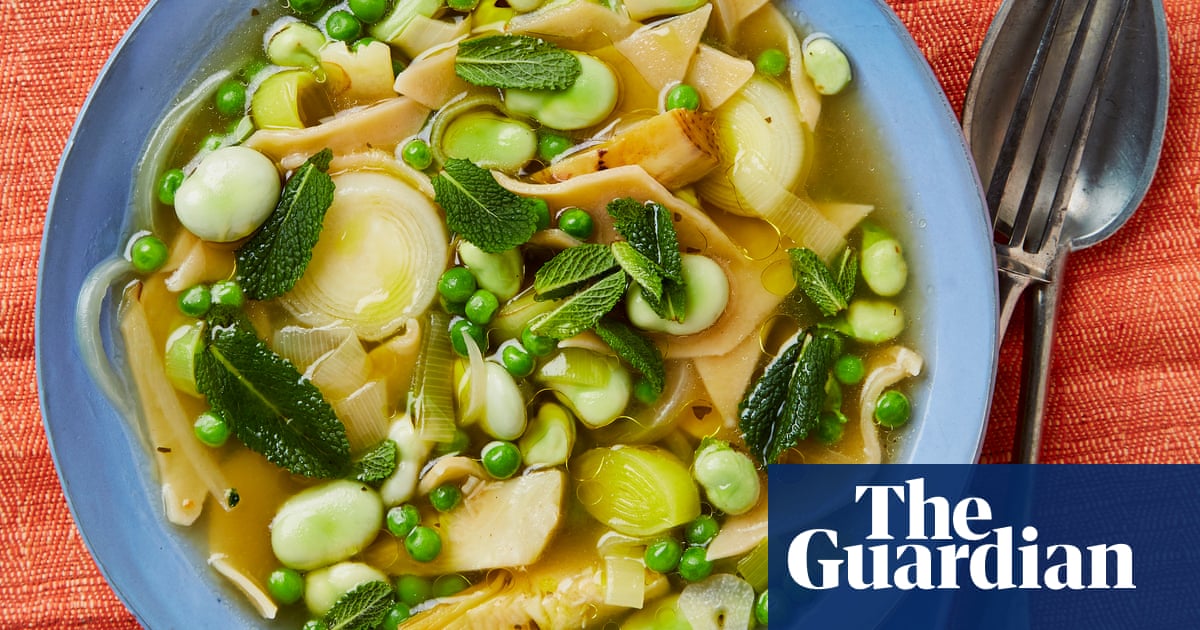 Fusion, when it comes to food, can be a bit of a dirty word, but progress often means building on old ideas to create new possibilities and, sometimes, joining the dots between food cultures. In today’s recipe, I’ve taken our ancient Gujarati chickpea pasta, or dhokli, made using gram and wheat flour (then usually simmered in dal), and added it to my favourite Italian springtime stew, vignole. I hope neither the Italians or Gujaratis will mind too much.

While fresh peas and broad beans will soon be available, frozen vegetables make a very wonderful stew. Gram or chickpea flour can be found on the world foods aisle in most major supermarkets or online.

First make the pasta dough. Put the flour, chickpea flour, oil and salt in a large bowl with 80ml warm water, and use clean hands or a spoon to bring everything together. Divide in half and roll on a floured surface into two large circles the thickness of a lasagne sheet. Cut the pasta into small diamond shapes, about 3cm x 3cm, then spread them out on a tray and toss in flour so they don’t stick.

Warm the oil in a large, deep pan over a medium-low heat, add the onion, and fry for seven minutes. Add the leek, garlic and half a teaspoon of salt, fry for six to eight minutes, until soft but not coloured, then stir in peas, broad beans and hot stock. Bring to a boil, then simmer for five minutes (a little less if using fresh peas and broad beans), until the peas and broad beans are just cooked through, then stir in the artichokes and leave to rest while you cook the pasta.

Bring a large pan of water to a boil and cook the pasta until it floats to the surface – about a minute or two, then drain and stir straight into the vegetable pot. Rip in the mint, drizzle with a little extra oil and serve at once.

The Four-Star Restaurants of New York – The New York Times