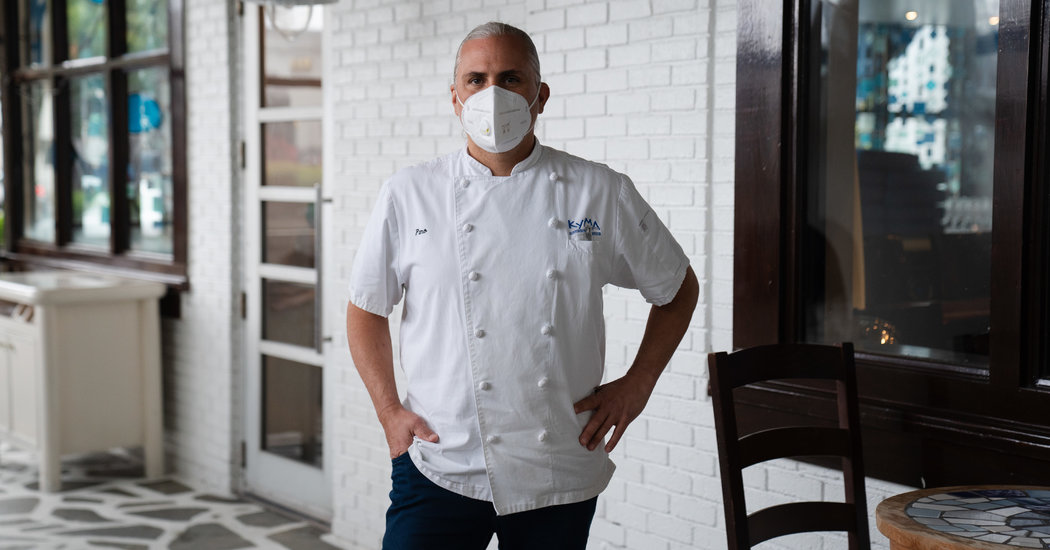 ATLANTA — This week, a restaurant here intends to sell what will likely be America’s first dry-aged porterhouse steak served by a waiter at a white-tablecloth restaurant in the midst of a global pandemic.

Gov. Brian Kemp, citing state health data showing that the state may have hit its peak of Covid-19 deaths on April 7, has given Georgia restaurants permission to begin table service on Monday. A handful will tiptoe back into business early in the week, but none with the robust enthusiasm of the Buckhead Life Restaurant Group, whose roster includes an upscale fish house, a French brasserie and a fancy diner with $15 burgers. If all goes according to plan, five of its seven restaurants plan to begin table service on Friday.

“Everyone’s going to the grocery stores, and there are some grocery stores where nobody has any gloves on,” said Pano Karatassos, a corporate executive chef for the group. “We are going to have an experience in my mind that’s 10 times safer. What we’re doing is looking to move forward with the new way of dining.”

For most American restaurateurs and their customers, the idea of reopening a dining room with waiters and a wine list may seem unthinkable when most of the country remains locked down and the nation’s death toll from Covid-19 has topped 50,000.

But even before the first of the nation’s scattered restaurant openings in Georgia and Alaska got the green light, chefs and public health officials began considering in some detail how a post-pandemic restaurant might look. Although many restaurateurs are still unsure if they will ever open their doors again, there are plenty — from fast-food operators to chefs at the most elite temples of haute cuisine — who spend their days strategizing how to get back to hosting diners.

Culinary and health organizations are drawing up guidelines and protocols for re-creating the American dining room as a safe space — even while acknowledging that could take many months or even longer to happen.

The first step in the long crawl back will be setting standards to protect workers and diners. “The most pragmatic thing we need to figure out right now is safety protocol,” said David Chang, the restaurateur and media star. “We are all asking for that, and no one really knows.”

The questions pile up fast. Should you rely on disposable paper menus, or is wiping down plastic-covered ones safe? What kind of thermometers are best to check employees’ health, and will diners submit to temperature checks? Can air-conditioning spread the virus? What is a restaurant’s liability if a customer gets sick? How does a sommelier taste wine while wearing a mask, and how do you rewrite a menu so cooks can stay safe in the tight confines of a restaurant kitchen?

“Once you go down this rabbit hole, it’s going to make your brain bleed,” Mr. Chang said.

He, like many chefs, is looking to restaurants in Asia, where several cities have begun to allow diners to return. He asked his Twitter followers to send images from Asian countries, and got back photographs of restaurants that had taped off chairs and booths to limit capacity, or placed cardboard partitions on tabletops to separate diners.

Some restaurants have proven that dining can have some panache even in the age of Covid. At Yardbird, one of Hong Kong’s most popular and influential restaurants, its designer fashioned plexiglass dividers for booths, and the owners have found a way to keep its energetic buzz at least somewhat intact.

Lindsay Jang, who opened the restaurant in 2011 with the chef Matt Abergel, said they follow strict government rules, which can bring a fine of about $6,500 and six months in jail if not followed. Customers waiting for a table can’t congregate in what was once the restaurant’s crowded bar. Diners have their temperatures checked, and use a freshly sterilized pen to sign a health declaration form. Tables are spaced one-and-a-half meters apart, and parties larger than four aren’t allowed.

Both waiters and customers wear masks. Diners can remove them to eat and drink, tucking them safely into an envelope the restaurant provides. Every surface is sanitized every half-hour.

Customers have accepted the protocols, Ms. Jang said. They’ve had to turn away only one for having a slight fever, and sent off a grumpy party of six that wanted to sit together. “People are honestly much more understanding about everything now,” she said. “They’re grateful they can go out and feel comfortable.”

Diners get used to the awkward style of dining quickly. “You don’t have that huge vibe, but it’s still good,” she said. “It’s still a restaurant.”

The key is trust, she advises American restaurant owners. “If you’ve managed to build a brand and built and cultivated integrity, people will trust you when you are allowed to open the door again.”

Serving half as many people hasn’t been profitable, though. Yardbird isn’t even breaking even, Ms. Jang said. But the damage isn’t as brutal, she said, as if the restaurant had waited to reopen until it could operate at full capacity.

In the United States, the rules dictating what is safe in a restaurant are anything but clear, even as states begin allowing them to reopen.

Last Thursday, the National Restaurant Association, whose members are largely chain restaurants, sent out a general set of guidelines that defers to government regulations, which will likely vary. They leave taking employees’ temperatures to the restaurant owner’s discretion, and recommend that restaurants follow state or local rules on the use of masks. Other suggestions include eliminating unwrapped straws, salad bars, buffets and cut lemons.

Independent restaurant owners are working with one another and some culinary organizations to develop more detailed protocols. Many have referenced a playbook put out by Syed Asim Hussain, a founder of Black Sheep Restaurants, in Hong Kong, which includes both science and tips on the art of hospitality.

“Guests are very sensitive to hygiene,” the guide states, “and anything that even looks messy will translate to unclean in their minds, so everyone’s uniforms, hair, nails, any surfaces guests can see, it all needs to be tidy and spotless, now more than ever.”

Another set of guidelines is in the works as part of a joint project between the Food and Society Program at the Aspen Institute and the James Beard Foundation headed by the food writer Corby Kummer, who received a grant to streamline best practices from chef-run food relief organizations like Off Their Plate, José Andrés’s World Central Kitchen and the LEE Initiative.

The New York City Department of Health and Mental Hygiene and an infection-control specialist from the Centers for Disease Control and Prevention are vetting the 25-page document, which will be translated into other languages and turned into posters for restaurants in the coming weeks.

In Georgia, chefs who want to begin reopening their dining rooms are using their own research and state health department guidelines released on Thursday.

Among the rules: Only 10 people are allowed for every 500 square feet, and no more than six can sit at a table. Employees must wear masks and be screened for signs of illness. Salad bars and buffets are no longer allowed, and silverware has to come in a protective covering.

“I think people have opinions on what works for them and their customers,” said Karen Bremer, the chief executive of the Georgia Restaurant Association and a longtime Georgia restaurant owner. “It’s their opinion on how they are going to open.”

Many restaurateurs in Georgia have said it is too soon, and Atlanta’s mayor, Keisha Lance Bottoms, has asked restaurants in the city not to open. Some are concerned about fronting the costs of reopening, only to be shut down if cases rise. Because testing for the virus has been limited, others fear that more people have been infected than the reported numbers indicate.

“There is no fancy meal right now that is worth my people’s health and the health of other people who come into a restaurant,” said the chef Hugh Acheson, who runs restaurants in Atlanta and Athens, Ga.

The chef Ryan Pernice is somewhere in the middle. He learned the business working for the New York restaurateur Danny Meyer before opening three popular restaurants with his brother in Roswell and Alpharetta, cities just north of Atlanta. In March, he laid off 80 employees and kept a core crew of 28, who have been preparing takeout food and some relief meals for people in need.

Now the brothers are hoping to reopen for diners on May 11. At first, he might offer only picnic-style meals on his spacious patio.

“There just isn’t a map for this. You have to make the best decisions with the terrain that’s in front of you,” he said. “Whatever magic happens across the tabletop will be there, but what that looks like in rural southwest Georgia is going to look different from what we do, and that will look different from someone does in New York when their time comes.”

In the end, it will be a question of trust, say restaurateurs who plan to reopen. Is the urge to sit in a restaurant so great that customers will endure an experience that is more like a trip to the dental hygienist? Will they risk infection, even in a place with the safest protocols?

“At the end of the day, we’re problem solvers and we will find a way to do this,” said John Currence, a Mississippi chef whose restaurant group employed about 700 people before the shutdowns. “The restaurant industry is about constant chaos and writing a ballet out of that chaos. We’ve spent all of our careers preparing for this moment.”

The Pros and Cons of Vegetarian Diets – eastnewyork.com