A chef watched by millions on social media has shared a ‘cheap, easy and delicious’ recipe for chocolate cake, which can be made from eight eggs and half a jar of Nutella for less than $10.

Rob Nixon, from Perth, Western Australia, is the brains behind Nicko’s Kitchen, an online cookery show broadcast on YouTube, Facebook, Instagram and TikTok which specialises in homemade versions of iconic fast food dishes.

He showed TikTok viewers how to make an indulgent chocolate cake by rapidly beating the eggs for eight minutes, folding in 240 grams of softened hazelnut spread and baking the mixture at 180 degrees Celsius for 40 minutes.

The recipe has been viewed by almost 13,000 people since it was posted on Tuesday, many of whom are researching experimental desserts to try in isolation as COVID-19 continues to force millions to stay at home. 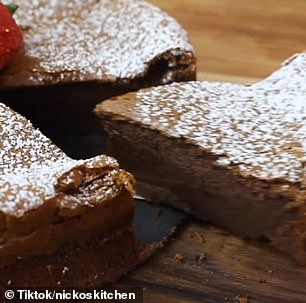 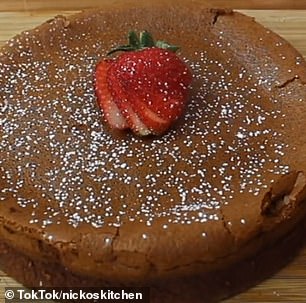 This chocolate cake can be made by beating eight eggs on a high speed for eight minutes, folding half a jar of Nutella into the mixture and baking at 180 degrees for 35 to 40 minutes

Before you begin, preheat the oven to 180°C and assemble the ingredients.

A dozen eggs cost $4.50 and a standard 400 gram jar of Nutella costs $5 from leading supermarkets like Coles or Woolworths. 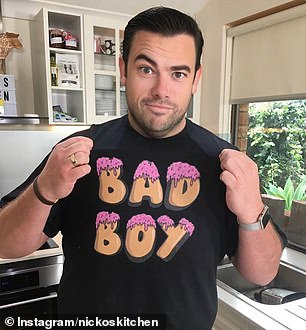 Take the jar of Nutella out of the pantry and leave it to soften at room temperature for at least half an hour. Typically thick, the spread is easier to work with when it’s slightly melted.

Crack eight small eggs into a bowl and beat with an electric mixer on a high speed for eight minutes. The mixture should triple in volume and become soft and fluffy.

While the eggs are beaten, scoop 240 grams of soft Nutella into a jug.

Slowly add Nutella to the egg mixture, one spoon at a time, gradually beating on a slower speed. 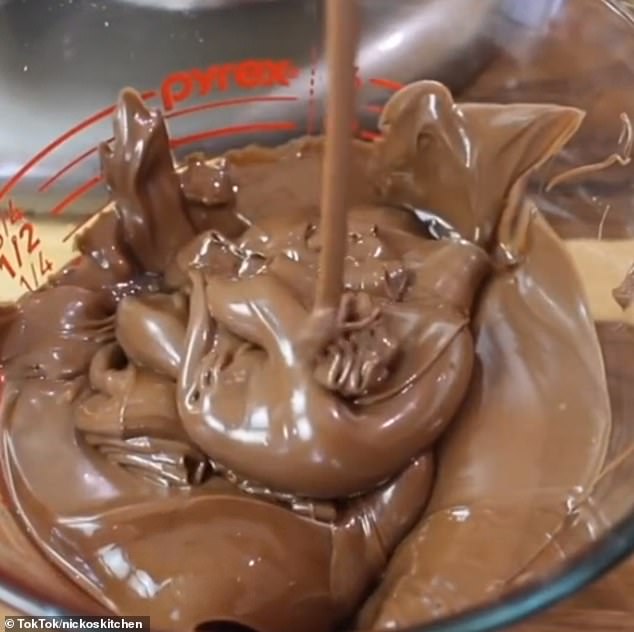 Nutella should be left to soften at room temperature for at least half an hour prior to baking until it reaches the almost liquid consistency shown here, which makes the typically thick spread much easier to work with 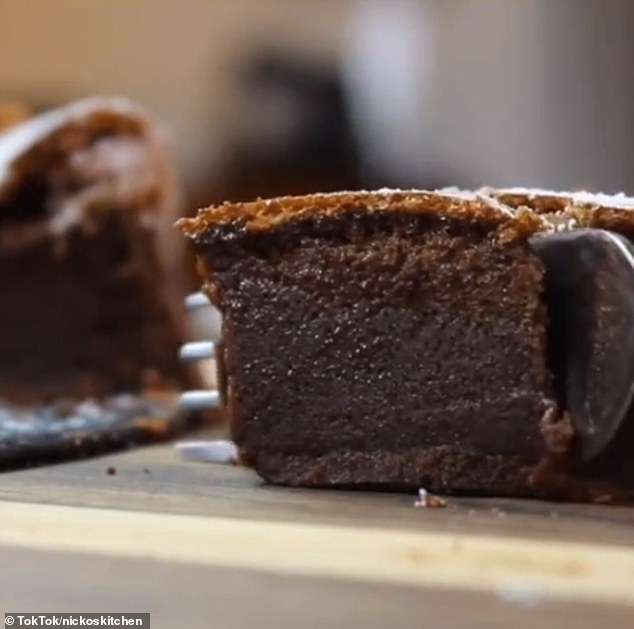 After being baked for 35 to 40 minutes, the inside of the cake should have appear moist and have this light yet luscious consistency

The top 10 most Googled recipes during COVID-19

The weight of the Nutella should cause the egg mix to collapse into a thin, liquid batter.

Slowly pour the batter into a cake tin and bake in the oven for 35 to 40 minutes.

You can test if the cake is fully cooked by sticking a wooden toothpick or slim knife near the centre. If the instrument comes out clean without crumbs or batter stuck to it, the cake is ready to eat.

The inside of the cake should appear moist with a light yet luscious consistency similar to a souffle, a French dish baked from beaten eggs.

Once the cake has cooled, decorate with slices of strawberry and lashings of icing sugar on top.

‘Cheap and easy to make, and tastes delicious,’ Mr Nixon said in the video.

Dozens of viewers likened the cake to a ‘Nutella omelette’.

‘This looks so good – trying tonight,’ one woman said.

Mr Nixon has garnered tens of thousands more followers eager to try his recipes since Australia went into stage two lockdown on March 23 to slow the spread of the deadly respiratory disease.

How to make Krispy Kreme doughnuts at home

– Half a cup of softened butter or margarine

– Three quarters of a cup of white sugar

– Half a cup of water

Before starting the dough, make sure you have a large, round cookie cutter to shape the mixture into individual pieces.

1. Add two cups of milk, one teaspoon of salt and half a cup of softened butter into a jug and heat in the microwave for one minute until warm.

2. Add half a cup of white sugar, half a teaspoon of nutmeg and four beaten eggs to the heated mixture and whisk until combined.

3. Pour the mixture into a large mixing bowl, adding two teaspoons of dried yeast and a quarter cup of sugar. Whisk again.

4. Add five cups of self-raising flour, one cup at a time, and mix well until the dough becomes thick and sticky. Leave dough to rest for one hour.

6. Roll out the dough and shape into individual pieces using a large, round cookie cutter, making a small hole in the centre to create the ‘ring’ doughnut effect.

7. Fry in canola oil in a deep-fat fryer or deep skillet pan at 340 degrees for two minutes on each side until golden brown and puffy, draining excess grease on a paper towel.

8. To make the classic Krispy Kreme glaze, add three cups of icing or confectionery sugar into a large bowl, along with half a cup of water and one teaspoon of vanilla essence. Mix until smooth.

9. Ice both sides of the doughnut and leave to set for 10 minutes before enjoying, still warm.