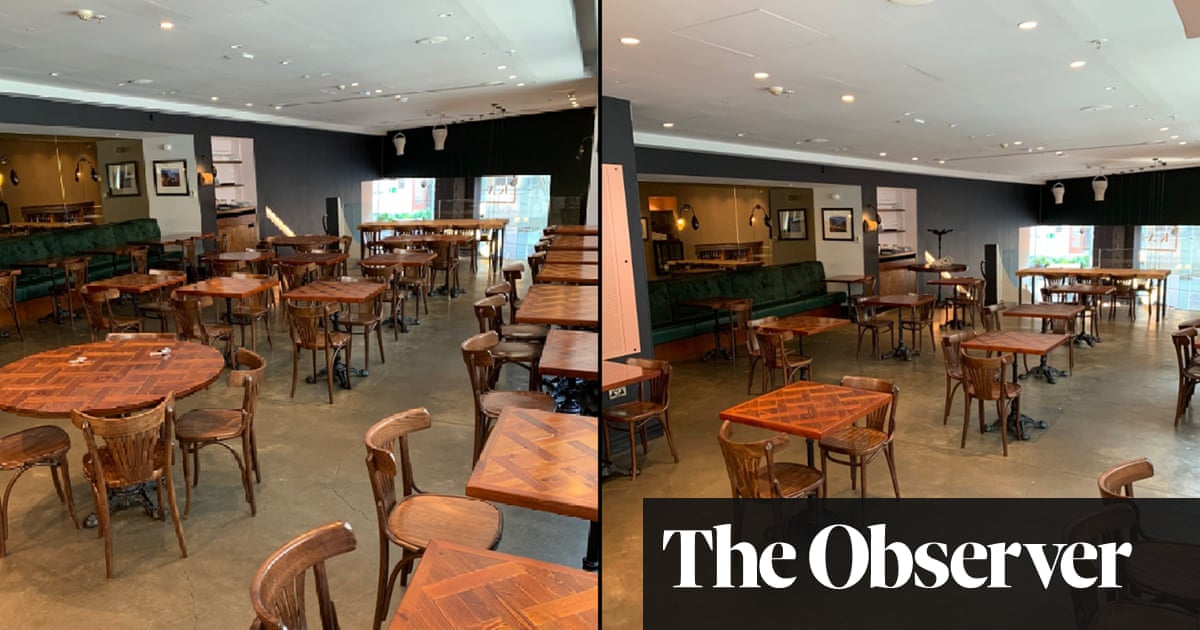 Last Thursday night, chef and restaurateur Gary Usher tweeted a bleak photograph of the dining room of his Manchester restaurant Kala. Instead of the usual compact arrangement you’d expect of a bustling bistro, the wooden tables and chairs were sparsely placed across the polished floor. “This is Kala minus 30 seats and even then, it’s not two-metre spacing,’ the caption said. “Feeling a bit low today. Sorry.”

It was an understandably gloomy response to chief medical officer Chris Whitty’s statement at the previous day’s Downing Street Press conference that in the absence of a vaccine, some form of social distancing – baldly put, keeping people two metres apart – would have to be in place at least until the end of the year. Katie Nicholls, chief executive of UK Hospitality, said: “I felt like I’d been punched in the stomach. We knew the lockdown would go on for longer than three weeks, but I don’t think we’d thought about it being so intrusive or so restrictive for so long, and that was an incredible shock.”

The UK’s £72bn hospitality sector, which employs 3.2 million people, has been struggling with what a socially-distanced restaurant business might look like. A number of London branches of sandwich chain Pret a Manger have reopened in the past couple of weeks, with Perspex screens separating staff and customers, and only 15% of the usual menu, so there could be fewer people in the kitchen. However, it is takeaway-only.

Traditional waiter-service restaurants say they are finding it hard to see how they could function at all with social distancing. Restaurateur Russell Norman spent a day measuring the floor space in one branch of his normally bustling small-plates Polpo group. “Keeping everyone two metres apart would require taking out two-thirds of the seats and that simply wouldn’t be economically viable,” he said. “And for a party of four, you would need a table which was 2.5 metres square, which is huge. It would also leave the restaurant with nothing approaching atmosphere.”

Usher, who has six restaurants in the north-west, agreed: “We have done forecasts on opening with just 50% of the pre-Covid trade. We’d survive for three months and then go bust.” Sam Hart, co-owner of 11 London restaurants including the counter-based Barrafina tapas bars, has similar concerns. “We’ve done ridiculous modelling involving ordering on an iPad and customers collecting their own dishes,” he said. “But how do you keep the staff apart when it comes to clearing tables, or working in the kitchen?” He pointed out that Barrafinas all have open kitchens behind a counter. “All the chefs are always less than two metres away from the diners.”

The consensus is that opening while there is still a public health emergency is simply not going to work for restaurants, bars and cafes. “If we open when, for example, latex gloves and masks are required, it will do long-term damage to the industry,” said Will Beckett of nationwide steakhouse group Hawksmoor. “And there’s absolutely no point in looking at what’s going on in Wuhan and trying to draw conclusions from that because national differences are huge.” There was a danger, he said, of the “industry losing its mind over all this social distancing stuff”.

Restaurant trade collapsed in a matter of days: the recovery will, said Beckett, take many, many months.

The morning after Whitty’s comments on social distancing, Nicholls, of UK Hospitality, wrote to Cabinet Office minister Michael Gove, acknowledging government support for the sector so far, but calling for it to be extended. She also proposed a comprehensive fiscal package to stimulate demand post-crisis. There is great concern that even if restaurants are able to open, few people will be in a position to spend money in them.

“It is perfectly possible for some restaurants to function with social distancing measures in place,” Nicholls said. “The question is how financially viable would they be?”

Without support, she says, 50% of hospitality businesses would go bust, and around 2 million jobs would be lost, both within those businesses and in the wider supply chain. “However, if they had government support until at least Christmas, that could get them to the other side and survival.”

The problem, she added, is that the government is in crisis mode and therefore finding it difficult to look far ahead. “We do not need to know when change will come,” she said, “but we really do need to know how it will work. The survival of the UK’s restaurant sector depends upon it.”