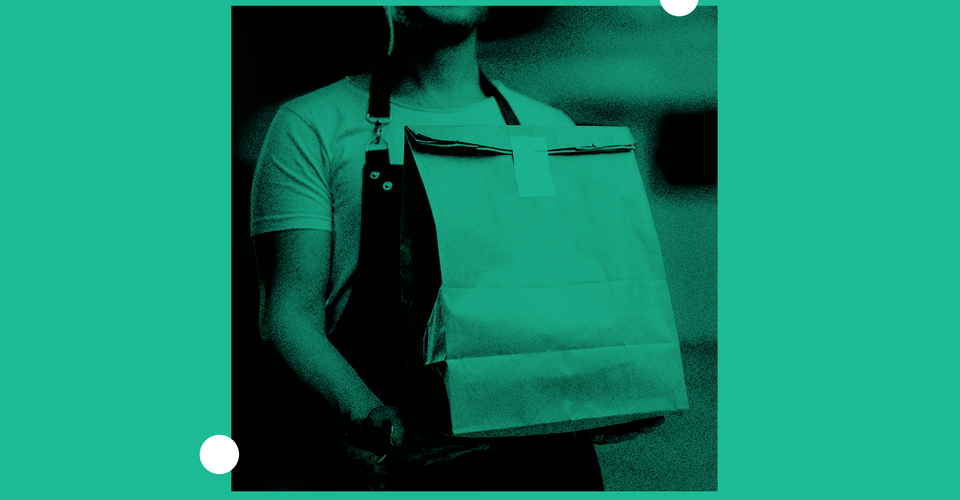 On the latest episode of the Social Distance podcast, staff writer Derek Thompson joins James Hamblin and Katherine Wells to discuss what the future of your neighborhood storefront tells us about how the pandemic could change American cities.

Listen to the episode here:

Subscribe to Social Distance on Apple Podcasts, Spotify, or another podcast platform to receive new episodes as soon as they’re published.

What follows is an edited and condensed transcript of their conversation.

Katherine Wells: What is happening to restaurants? How much are they suffering right now?

Derek Thompson: There are two numbers that would help quantify how bad it is for restaurants right now. The first is zero. That’s the number of reservations that have been made on OpenTable in the last two weeks, because the dine-in business in the U.S.—and really throughout the world—has been effectively eliminated. And the other is –60 percent, which is the change in restaurant spending over the last month and a half. Independent mom-and-pop restaurants where dine-in is essentially their whole business, for a lot of them, that has gone to zero.

Wells: Are there any businesses that are doing okay?

Wells: How big is the restaurant industry? How much of a part of the economy was it prior to the pandemic?

Thompson: In the last few years, for the first time in American history, Americans started spending more money on what the government calls “food away” rather than food at home. “Food away” means restaurants, stuff you pick up at a convenience store, salads you pick up at a fast-casual restaurant, even if you don’t sit down at Sweetgreen, for example. Americans have just recently started spending more on that kind of food than they had been spending on groceries. You could argue that restaurants had never been more important to the United States, not just on an emotional-cultural level, but on a hard economic level, restaurants had never been a larger part of America’s food budget. That’s why I’ve been looking so deeply into how the pandemic is affecting the restaurant business, because I think it’s the canary in the coal mine. Their response is going to anticipate and predict a lot of the way that the rest of the retail industry is going to respond.

You’re going to see a really critical shift from in-store experience to delivery, and that’s accelerating things that were already happening. At the big-picture level, Americans before the crisis were spending about 15 percent of total retail online. It was growing about one percentage point a year, and it’s projected to go this year to 25 percent. We’re going to experience a decade’s worth of acceleration in e-commerce in a matter of months. That’s going to happen times two or three in the restaurant industry. You’re going to see a lot of restaurants become something like prepared grocers. A restaurant might give you a bunch of prepared appetizers and then give you an uncooked steak and maybe some pre-prepared liquids and alcohols for you to make your own cocktails at home.

James Hamblin: This sounds like it’s going to become a luxury service.

Thompson: That is why, in the short term, I’m really pessimistic about the restaurant business. The last 20 years have really been a golden age for restaurants in America. And I think that age is coming to a brief end. In a way, it’s kind of like returning to the 1890s. In the 1890s, you had a virtual retailer called Sears. Sears was the Amazon before Amazon. It was a virtual retailer that delivered a Bible’s worth of goods to people’s front doors that they ordered by mail. They did everything that Amazon did, except with the post office rather than the internet. And in the 1890s, you not only had a virtual Sears economy, where you could order whatever you wanted from their catalog, you also didn’t really have a restaurant business as it’s currently understood. America was more rural. It wasn’t even suburban; it was majority rural. As a result, people cooked at home, and they did child care at home, and they taught their kids at home.

When you think about that world, combining the fact of an all at-home economy with a virtual retailer, that’s kind of what modern life is. We’re all stuck at home. Parents are raising their kids. They’re doing their work at home. They’re essentially working on their own private farms, except their private farms are on their computers. And they’re ordering stuff through a virtual retailer. We’re back to the 1890s.

Wells: I think of earlier eras as being full of small businesses. Is there going to be some return to that?

Thompson: I don’t see any good news for mom-and-pops. At least three things are going to work against them. First, they have much more meager savings than larger companies, which means that it’s going to be harder for them to survive the pandemic summer, the pandemic fall, the pandemic winter. Companies are going to need to brace themselves for a period of lower consumer spending. Larger companies have the savings to do that. Mom and pops don’t.

Second, you’re going to see disruptions to immigration. You’re already seeing the president trying to shut down immigration entirely. Even if he didn’t, there is still effectively a lockdown throughout much of Latin America and throughout much of the world, which means that it’s going to be harder for global migration to happen even if we have liberal immigration rules. And immigrants are responsible for a huge share of our restaurants and retailers in urban areas.

Third, big businesses are going to use elements of the slow recovery to get even bigger. They’re going to merge and say that these mergers are necessary to save jobs, and the feds are going to let them. They’re going to have the money to install things like temperature checks and extra sanitizers and other elements of social distancing. They’re simply going to be more resilient in the next few years. As a result, that means that we’re going to see a flattening of the American city.

Hamblin: You and I have talked about seeing this happen in New York, where even in popular, expensive parts of the city, suddenly these storefronts and restaurants were empty. And it seems to be, at least in part, because people who work in these places can’t afford to live in that area anymore. You’re saying that maybe this pandemic could even accelerate that trend until it bottoms out and we start over again?

Thompson: A lot of those businesses are going to go away, and a lot of bank branches and CVSes and Paneras are going to move in. That all sucks, and I’m not rooting for it. I just think that it’s probable. But the very fact that it sucks means that prices in cities, commercial rent prices, residential rent prices, are likely to fall. Cities are going to be a little bit more sucky in the next few years. And as rents fall, that will actually be good for the future of the American city. It will allow the artist to move back in, the counterculture to move back in; the wonderful weirdos whose eccentricities define the best urban neighborhoods, they’ll be able to move back in too.

Anything that makes American cities a little bit cheaper will, in at least some respects, be good for the middle class. Because it will allow more people from the middle class to live in cities. Now, the mechanism that will make cities cheaper is a terrible mechanism. It’s a pandemic. It’s killing people. It’s destroying businesses. It’s exploding mom-and-pop dreams across the country. It’s not a good mechanism, but even tragedies can have unexpected silver linings. There’s a lot of bad that’s going to happen. But in the long run, there’s going to be some good that happens as well.

Wells: I want to read you a sentence from your piece that, at first, I thought was an error. The quote is: “Because the pandemic pauses the present, it forces us to live in the future.”

I read that and did a double take, because I keep thinking that the pandemic obliterates the future, so I’ve had the experience of only being able to live in the present.

Thompson: Interesting. I certainly can’t tell you you’re wrong. When I was reviewing the piece last night, I paused at the line too. I thought, To what extent do I really mean this? I could imagine having taken your side of this and saying that, in fact, the pandemic pauses the future and forces us to live in the present. But this is why I stand by the line: Right now, so much of life is frozen in a state of uncertainty. We don’t know when our cities are going to come back to life. We don’t know when we can see our loved ones and our families and our friends. Because we live in this pocket of uncertainty, we are forced to imagine alternate futures. We’re so eager to think through the alternative timelines that will lead us back to the normal lives that we loved.

Hamblin: If we spend two years social distancing, how long will it be before people really pack the restaurants in the same way?

Thompson: I don’t know when they’re going to feel totally normal again. There’s going to be this weird purgatory where the restaurant experience is totally changed, where restaurants feel more awkward and more quiet and more empty and more cavernous than they used to. There will be antiseptic things around us. There will be hand sanitizers; there will be laminated menus that are constantly disinfected. That’s going to change, for a lot of people, the joy that’s inherent to dining out, the carelessness that’s inherent to dining out.

I love getting drinks with people because I can forget about the world. But if going to the restaurant makes you feel more anxious and more part of a dangerous crowd, then being in a restaurant will make you feel more on edge, rather than less. You’ll want to retire to your living room, because that’s where you can truly feel safe. It’s going to be really weird in the next few years.

Class of 2021: we celebrate the graduation of the Eat Out Food School students – Eat Out