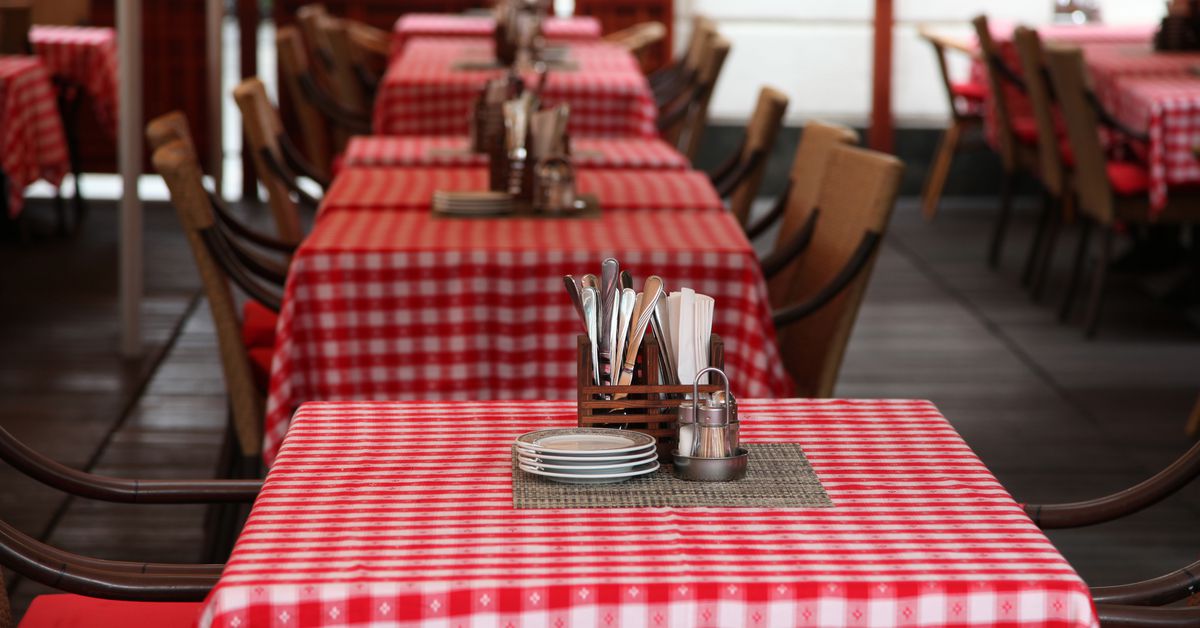 When cases of COVID-19 were first reported in Memphis, Tennessee, in early March, Kelly English was quick to close dine-in service at all three of his restaurants. But on April 27, when Memphis Mayor Jim Strickland announced a tentative reopening plan for the city, which includes reopening restaurants to diners, English didn’t start planning a return to normal. He intends to stick to delivery.

“We aren’t rushing to [reopen],” English says. “There’re a lot of factors that go into this. I love my staff, I’m very sensitive to the fact that they’re not working right now. And I’m also very sensitive to the fact that we need to make good decisions for the long term, to make sure that those jobs still exist.” English says that once dining in is allowed in Memphis, his decision to reopen will ultimately be a slow one, first observing how maximum occupancy regulations are enforced at other nearby restaurants and seeing how they fare before he makes a move. He already has a sense for how his restaurants might do at half capacity: “If you came to me, a restaurant with 12 tables, and said, ‘You’re at 50 percent capacity,’ I’m screwed.”

English isn’t the only restaurateur wary of opening hastily, making yet another change to their daily operations.

As some states across the country allow businesses to reopen with limited occupancies, there are still serious obstacles in the paths of restaurant owners. In those Tennessee counties that have already reopened, restaurants can’t exceed 50 percent of their maximum occupancy. Restaurants in most of Iowa will also have the option to reopen at half capacity. Those in Alaska will be limited to 25 percent capacity, and will only seat diners who make reservations in advance.

Ryan Pernice, who owns three restaurants north of Atlanta, didn’t jump with excitement when Georgia Gov. Brian Kemp released a list of 39 guidelines in advance of a push to open certain businesses — including restaurants — on April 27. Most notably for restaurant owners, the guidelines do not allow more than 10 patrons per 500 square feet in dining rooms. After Pernice closed his restaurants on March 17, leaving just one of his restaurant kitchens open for delivery, he sat down to crunch some numbers.

Even with the lights and the walk-in refrigerators turned off, running a restaurant remains an expensive endeavor. Pernice decided to continue paying for services, like pest control, that couldn’t just be ignored, as well as major costs like rent and outstanding vendor invoices. To break even and cover expenses at Table and Main, Osteria Mattone, and Coalition — his three restaurants — would cost $4,128 a day. Though he’ll take the measurements and rearrange the tables to see if reopening is feasible, Pernice can’t imagine hitting that number with only half of the seats in his restaurants occupied. “Not having run the numbers, I seriously doubt that in Table and Main, a tiny restaurant of 1,800 square feet, that I could make more doing sit-down dining than I can right now through our takeout … I think there’s very little to be gained by being the first to this party, in terms of opening the dining room again.”

Though some restaurants in Atlanta and across Georgia made the decision to reopen to diners, others echo Pernice’s sentiment: They’d rather stay closed until opening doesn’t feel so perilous. Glenn Singfield II owns two restaurants in Albany, Georgia, a city that has been hit hard by the coronavirus. Last week, two of Singfield’s friends passed away after contracting the virus, and his aunt just recovered. With a diabetic mother at home, Singfield spent the better part of last month at home with his parents after closing both of his restaurants. Just last week, he reopened Albany Fish Company, the smaller of his two restaurants, for takeout and curbside pickup. The Flint, his 10,000-square-foot location, remains closed.

“I’m going to support my governor, and I want to support my mayor and my civic officials,” Singfield says. “But I still have a choice. And our choice was to continue to do business as we’ve been doing it until we can see a major curve in coronavirus. And until we can find a conscious way to make sure our customers, employees, and ourselves can be safe.” Though he doesn’t know when he’ll reopen his restaurants, Singfield has already rearranged Albany Fish Company, and is putting up plexiglass partitions to separate diners from servers. He’s having a harder time imagining what the Flint will look like when it reopens. “When you’re at a fine dining restaurant, it’s an experience that you come for, not just the food. If you’ve got to wear hazmat suits, and you’re spaced out, what’s the purpose of it? We do live music, it’s a party every Friday and Saturday night. But I’m not going to jeopardize anyone’s safety for anything.”

Half occupancy doesn’t add up

On weekends, a line stretched out the door of St. Kilda Cafe and Bakery in Des Moines, Iowa. Alexander and Whitney Hall, the restaurant’s owners, would pack guests in, the din of service rising as the restaurant filled to capacity with diners stuffing themselves with breakfast tacos, pastries, and all sorts of breakfast-appropriate cocktails. Restaurants in Des Moines — in one of the state’s hardest-hit counties — are still operating under tight restrictions, but as restaurants in 77 other counties begin to invite diners back inside with spaced-out tables and a limit of 50 percent capacity, it’s certain Des Moines will follow after.

These occupancy limits are a serious hurdle for cafes and restaurants across the country that rely on busy weekend service. “That weekend is so vital to daytime cafes … We do 75 percent more revenue on Saturday than we do on Tuesday, for example. So if we lose that weekend we’re relying on being bustling and busy, it would make us hemorrhage even more money,” Alexander Hall says. “I know the restaurant business pretty well. I’ve been doing it for 27 years, and at 50 percent capacity restaurants don’t work. Unless the landlord gives you 50 percent rent, and MidAmerican energy is giving you 50 percent off the [energy] bill.”

In New York, the prospect of dining at a restaurant is still hard to imagine, and some restaurateurs are trying to envision how they might operate their restaurants at half or quarter capacity. As they crunch numbers and drag tables away from each other, they’re not much more optimistic than Hall. “Our busiest services are weekend services in particular, where we like to pack them in and pack them out,” says Claire Sprouse, the owner of Brooklyn all-day cafe and bar Hunky Dory. “They carry the rest of the week for us.” If the restaurant saw only half of the weekend customers it did before the coronavirus, Sprouse estimates her restaurant would bring in 40 percent — not half — of what it once did. “For us to survive, we would need to be doing a fair amount of takeout to make up for those missing seats. … Something has to give.”

The cost of reopening

For restaurants that already operated on razor-thin margins, reopening isn’t just a judgment call. When the time comes, it will cost Alexander and Whitney Hall $15,000 to reopen their largest restaurant. Glenn Singfield reckons it will take $25,000 for both of his restaurants to become operational again. To switch the lights back on, restock all of the refrigerators and bulk bins, bring in a cleaning crew, it’s an extremely expensive ordeal.

To reopen at such high costs only to serve a half-full restaurant isn’t feasible for many restaurateurs who were barely holding on already. “It is not as simple as turning on a light,” says Pernice of his three restaurants. “We’ve been trying to turn as much inventory as we can to cash. We’ve been trying to get everything that’s worth a dollar out of the restaurant. If we are to open, it will cost a lot of money to restock. And we in effect haven’t been open for six weeks. So there’s some planning toward how we use the precious money we have.”

Singfield says he’ll have to “piece it together” when it comes time to find the funds to reopen his restaurants.

For many of these restaurateurs, there’s a concerning backdrop to the already-difficult conversations being had about the risks of reopening at limited capacity. Restaurant owners who accept Paycheck Protection Program (PPP) loans are in a bind, as the loan is only forgivable if all full-time staff are rehired by June 30. How, these restaurant owners are trying desperately to work out, can they hire back their entire staff if their restaurants are only operating at half or quarter capacity?

In New York, and other states that have yet to reopen, and where occupancy limits are inevitable once they do, a PPP loan can feel more like a burden than a gift. “It feels really scary to take on potential debt even though it’s like, maybe forgivable when the timeline for reopening is so vague. And then there’s no clarity about whether or not we can open in a full capacity,” says Carla Perez-Gallardo, a co-owner of Lil Deb’s Oasis, a snug neighborhood restaurant in Hudson, New York.

Lil’ Deb’s Oasis has a legal capacity of 30 people, and the restaurant’s owners can’t see a way to hire back their full-time staff members while serving a half-empty restaurant. “The pressure is on businesses to pay their employees that they’ve hired back, at a time in which they may not even be able to pay their rent,” says Perez-Gallardo. “It feels like an odd narrative to be moving toward at a time where it doesn’t feel possible.”

The path forward is extremely uncertain for restaurants, whether they apply for and are given a PPP loan or not. Resources and guidance across the country are limited, and restaurant owners are left to ask questions that no one, it seems, will answer. “For us, the best-case scenario would be to have flexibility with our landlord and for our local and our federal government to provide some relief or guidance in how to move forward,” says Sprouse, who applied for a loan but has yet to hear back. “Right now it’s like they’re putting a Band-Aid over a severed leg.”