There was no live music in Deep Ellum Friday night, which was still a ghost town with plenty of places to park up and down Elm and Main streets, which is normally unimaginable, pre-pandemic.

Restaurants were allowed to open Friday at 25% capacity as part of the first phase of Gov. Greg Abbott’s plan to reopen Texas, while bars, defined as making 51% or more in revenue from alcohol sales, are to remain closed.

Most of the businesses in Deep Ellum, a favorite Dallas nightlife spot, were still closed or only offering takeout and delivery Friday night. Some favorite restaurants were open, however. The Free Man had its patio open and managed to fill up a few tables. St. Pete’s Dancing Marlin, Terry Black’s BBQ, and Bucky Moonshine’s had all opened their dining rooms with several feet in between tables, doing modest business.

The bar at Bucky’s, for example, was empty around 6 p.m., and one couple sitting at a booth had the whole restaurant to themselves. Black’s massive dining room was perhaps the most striking. Many of the tables were removed and only one was being used. At the counter, the employees are now separated from customers with the plexiglass panels we now expect in grocery stores.

Le Bon Temps and Deep Sushi, in particular, were attracting crowds. Those who weren’t in Deep Ellum for food either seemed to be taking a glance at the area from their cars, walking up and down the sidewalks for exercise, or taking selfies in front of murals.

“There is a lot of that right now,” said Bucky’s owner, Ivan Pugh, referring to those coming for murals. “People just need to get out for any type of activity that isn’t restricted.” 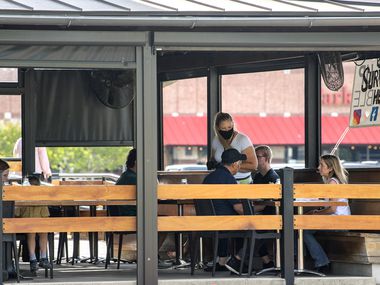 This was very much the story with Lower Greenville, too. There were plenty of places to park for once, half of the businesses seemed to be completely closed, and this writer did not see a single establishment with a dining room open. Everyone in the neighborhood actually seemed to be from the neighborhood. Most seemed to be walking their dogs or stopping by liquor stores.

Greenville Avenue Pizza Company had an impressive line of customers, but few other businesses seemed to be faring well. Getting a table at Wabi House is usually a lucky break, but there were zero customers at the business around 7 p.m. Blue Goose Cantina and Company Cafe, however, each had a few patrons sitting at tables outside. The Avenue Sports Grill posted a sign that read, “We are open-ish.”

In Oak Cliff, Norma’s Cafe was easily outperforming everyone else with a full parking lot. Legendary taco shack Taqueria El Si Hay was also doing typical Friday business with a very long, albeit social distanced, line. Nora had reopened, but customers seemed hesitant to reenter the small bistro. Eno’s Pizza Tavern and Veracruz Cafe were attracting a few customers with tables outside.

But North Bishop Avenue was shockingly empty otherwise. The area between Davis and Eighth streets is normally bustling during lunch or dinner time, but Friday evening the sidewalks were virtually unused, and very few cars were parked on the street or even driving on it. 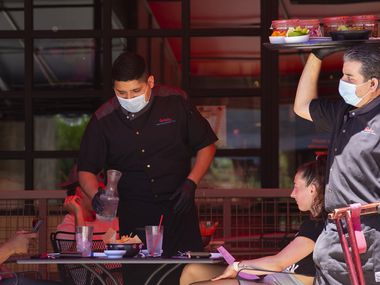