That’s a sweet hack! Viral TikTok video reveals how to safely blow out the candles on a birthday cake WITHOUT spreading germs all over the top of it

By Charlie Lankston For Dailymail.com

A TikTok user has gone viral after revealing a simple, yet effective hack that allows you to blow out the candles on a birthday cake without spreading germs across the frosting – allowing all those celebrating a new year during the pandemic to still enjoy the much-loved tradition.

The clip, which was posted by Washington-based user Utulei Rachel Manu, details an incredibly easy trick for protecting a birthday cake – keeping the plastic casing on it while you blow out the candles.

In her video, which was captioned ‘birthday life hack’, Utulei shows a birthday carrot cake being served up in its original plastic container – which the candles have been cleverly stuck onto. 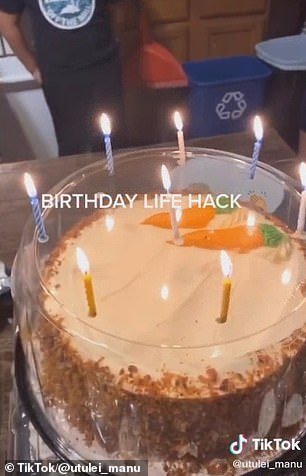 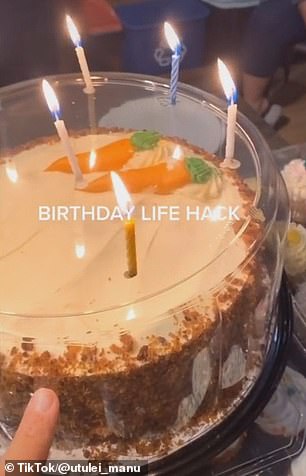 Genius! A TikTok user has revealed how you can blow out the candles on a birthday cake without spreading germs across the top

And if you thought that the process of sticking the candles onto the top of the plastic lid might take some special skills, think again.

Utulei explains in the clip that you simply have to burn the bottom of each candle so that it melts slightly, then you can stick it onto the plastic using the liquid wax.

‘Life hack,’ she says, while filming her own version of the cake hack. ‘Keep the container on the cake, burn the bottom of the candle, and just stick it to the container. 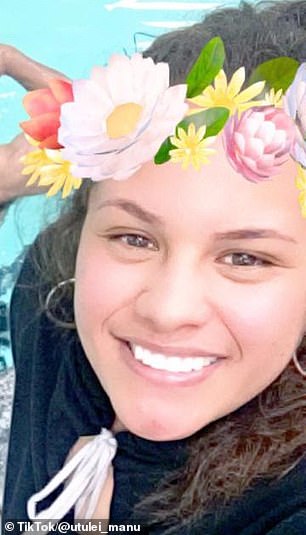 Utulei’s clip wowed her fellow TikTok users, with many people commenting to commend her on the clever hack.

‘Never thought about that [but] that’s genius,’ one person wrote, while another chimed in: ‘Genius, so I’m not eating anybody’s spit!’

‘This is an amazing idea, I will use this going forward,’ a third person added.

One TikTok user even confessed that they normally avoid eating birthday cake altogether for fear that they will have to ingest someone else’s spit, thanking Utulei for providing them with a hack that stops this from happening.

‘Genius! I don’t usually eat birthday cake because when people blow out their candles spit goes everywhere,’ they explained.

Some were not as convinced by the hack however, with many pointing out that the trick won’t work if the cake is homemade.

A few even admitted that they wouldn’t try it out simply because it doesn’t look as good as a normal birthday cake that has candles stuck straight into the frosting.

‘Nah not good for pictures,’ one commented.

‘It looks kind of tack,’ another wrote, before adding: ‘You’ve just traded aesthetics for four seconds of clean up.’ 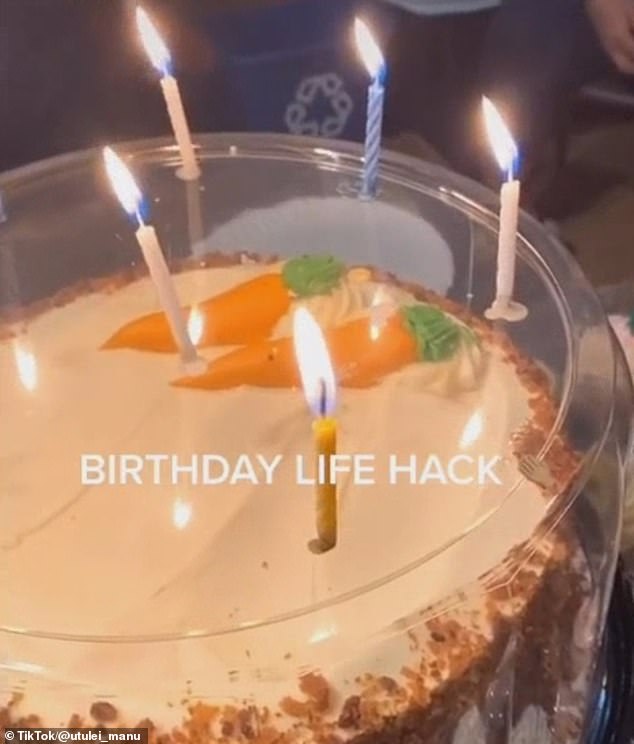 Clever: Utulei revealed that if you leave the plastic container on the cake and stick the candles to the top of it you can blow them out safely 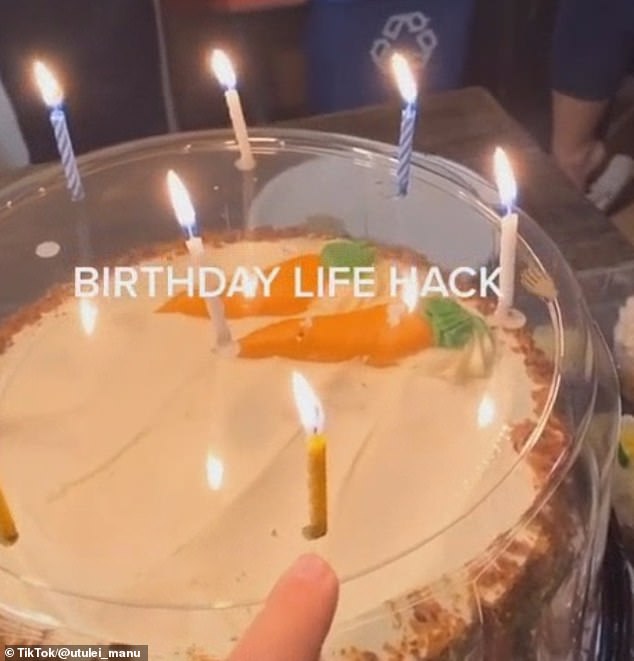 Quick and easy: She explained that you can stick the candles onto the lid of the container by melting the bottoms and using the liquid wax as an adhesive

These commenters were quickly shut down by other users who quickly pointed out that it is worth sacrificing aesthetics for safety, particularly amid the coronavirus pandemic when everyone needs to be all the more careful about the spread of germs.

Even before the COVID-19 outbreak, it was revealed that blowing the candles out on a birthday cake can increase the amount of bacteria on its frosting by a staggering 1,400 per cent.

As part of an experiment, a research team at Clemson University put frosting on a piece of foil atop a cake-shaped Styrofoam wheel, which they stuck candles in.

Before blowing out the candles, they all ate pizza, to ‘simulate a birthday party,’ and ‘help the salivary glands get going.’

They then lit the candles and blew them out.

To count bacteria, the team diluted the frosting with sterilized water and then spread it out on agar plates for the bacteria to grow.

The team of researchers found that there was a lot of bacteria, but more surprisingly, that each blow resulted in different types of bacteria.

On average, blowing out the candles caused the frosting to grow 14 times as much bacteria.

However, in one case, it was increased by more than 120 times, suggesting certain people transfer more bacteria than others.