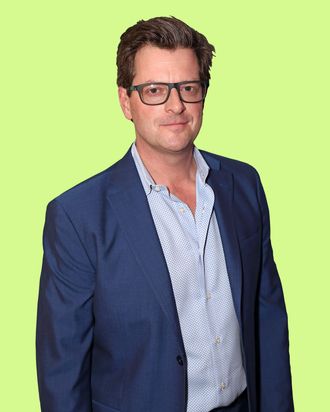 William Sitwell, the preeminent English restaurant critic, was sitting in his mother-in-law’s attic in Somerset, toward Devon, 40 minutes from the Southwestern coast of England. Behind him, nestled into the eave of the estate — his wife’s father was the Lord Roborough — was an ornate dollhouse. “It’s one of three,” he noted. On the table beside him sat a pot of Earl Grey tea and some cookies. “It looks like they have raisins in them?” Sitwell was having a spot of tea. “It’s very nice China,” he said, holding the pot toward the camera, “very dainty.” I, meanwhile, was watching a cockroach make his merry way across my kitchen floor in Brooklyn. Disrespectful, I thought. I was eating a chocolate chip cookie I had baked due to anxiety and drinking from my third pot of coffee. These were, I should say, not the circumstances under which I had anticipated interviewing Mr. Sitwell, whose book The Restaurant: A 2000 Year History of Dining Out was published in April to immediate obsolescence.

But Mr. Sitwell, the great-nephew of Dame Edith Sitwell and heir presumptive to a baronetcy in Derbyshire, was taking it on the chin. “It really is incredible timing to come up with a memoir of restaurants which are effectively now just a figment of our imagination but I just accept it.” He took a sip of his tea and nibbled his cookie.

Though the book’s subtitle suggests a continuous chronology, in point of fact, Mr. Sitwell, now a restaurant critic with the Telegraph, cherrypicks a handful of interesting and important restaurants to feature, from the Inn of Primus in Pompeii, to Paco Roncero’s 12-seat $1,000-a-person restaurant Sublimotion in Ibiza. Along the way, he, and by extension the reader, dine on fried chicken in Isfahan with Ibn Battuta in the 14th century, down oysters and swans in the public eating houses of 16th-century London, sip coffee and argue Hume in the coffee houses of the Enlightenment, sup on boullion while the Bastille is stormed in Paris, and pay homage, of a sort, to Alice Waters in her Berkeley redoubt. Sitwell ends the book with a chapter about the future of food on the presciently upbeat note: “There will always be a place for the simple establishment,” he writes. “A little place with a small kitchen, a modest, seasonally changing menu, a functional wine list, cheerful staff, and the buzz of conversation and laughter.”

“I still stand by that last paragraph,” he says now, “though I am worried.”

The book is, um, not my cup of tea. Though indeed a puckish pen, Sitwell seems a random selector. The 18 chapters spread over two millennia feel both sprawling and woefully unsuited to the task of living up to the promise of the subtitle. Sitwell’s curatorial acumen is, frankly, questionable. Does the opening of Le Gavroche in London warrant as much coverage as the entire Ottoman Empire? Do we need a chapter on sushi conveyor belts? More troubling is Sitwell’s dismal treatment of those who are not his peers. Much is made of the cuisine of sultans, kings, and counts but when he writes of women, of vegans, or of the disenfranchised, his arch tone turns to an Etonian sneer. His chapter on Alice Waters, for instance, is full of winks and nods to her happening sex life and drug use. He quotes a former lover, Jerry Budrick, on Waters’s powers of seduction and a friend, Barbara Carlitz, on her involvement with “so many of the men” before transitioning to get-off-my-lawn derision: “Moreover, if Waters wasn’t smoking dope (though she did admit to taking acid on one occasion), there were many tales of the staff doing so — stories of waiters exhaling dope smoke as they brought dishes to the table.” Dope smoke? Zounds.

Meanwhile Le Gavroche’s Marco Pierre White, a notoriously hard partier himself, is simply described as, “the brooding long-haired moody rockstar.” (Surely it is helps White’s case that his blurb appears on the cover, describing Sitwell as having “the honesty of a high court judge.”)

Even more confounding is Sitwell’s treatment of veganism, which he tucks between virtual reality and Instagram in the last chapter, entitled, “The Future of Eating Out.”

If chefs didn’t like being slaves to the latest food trends, then the people who marketed them, their publicists, persuaded them that they should. And one of the biggest of those trends in 2019 was veganism.

For some, veganism brought together a perfect mix of global concerns, bestowing on oneself the badge of of-the-moment principles.

A few lines later, he recycles the “badge” language and makes liberal use of eye-rolly quotes, writing, “For certain activists, including those who badged themselves as BAME (black, Asian and minority ethnic), [veganism] was, according to one self-styles ‘vegan ambassador,’ Jay Brave, ‘an opportunity to make a stand against entrenched inequalities in British society.’” Dude, we get it.

For those who are not familiar with Sitwell’s history, it’s worth noting here that in 2018 he left his position as editor of Waitrose Food magazine after responding to a freelance pitch about veganism thusly: “How about a series on killing vegans, one by one. Ways to trap them? How to interrogate them properly? Expose their hypocrisy? Force-feed them meat?” No matter. It was a joke and this isn’t a book of personal confession. Yet even most historians would disclose conflicts of interest this smarting, and certainly all journalists would.

As Jay Rayner, another bombastic and slightly better known British restaurant critic recently noted, the gulf between how we view critics in the United States (sober, impartial) and how critics are viewed in the U.K. (partially sober) is wide. “The half a dozen or so national critics in the U.K. are the writerly equivalent of bareknuckle fighters,” he wrote in the Guardian. But there are still rules for bareknuckle fighting, and regardless of the individual circumstance, Sitwell’s snide dismissal has aged, over its short life, poorly. As the doors of America’s meatpacking plants stay open, by legislative force, their rottenness has only become more apparent.

Nevertheless, like all works of history, The Restaurant is useful in uncertain times like these. As I read through its pages, I tried to apply our current pickle to historical pickles. Have we been here before? Is our current restaurant crisis more like Pompeii (sudden, instant immolation) or like post-revolutionary France (massive social upheaval in which the former servants of the now beheaded aristocrats waded into private enterprise as chefs) or, perhaps, like post-war Britain (a war from which a nation emerged heartened and hungry)? It’s hard to say right now, when it feels like a volcano spewing ash over a house divided in a town in deadlocked battle with an invisible enemy. “At least in war,” Sitwell says on FaceTime from the attic, “people got tremendous community spirit by eating out. Now the only community spirit we have is sort of tentatively over the garden wall or clapping our NHS staff every Thursday night.”

The fact is, we’re living through a catastrophic, ahistorical hairball the likes of which, to ape Trump’s dumb-dumb movie-trailer syntax, we’ve never seen. Speaking of Donald Trump, Sitwell is a fan, if not of the policy then at least his theatrical cupidity. “If there’s one world leader keeping our spirits up, it’s Donald Trump,” he says, “He’s hilarious.” When I suggest, gently, that he’s less droll when he is one’s own head of state, Sitwell responds, “Well, you deserve him.” Sheesh.

In his attic in Somerset, Sitwell seems a man grappling with the times. “Though there is a lot of the new stuff in London,” he says, explaining his approach as a critic, “it’s an example of the fact that we [in the U.K.] have a burgeoning, interesting and exciting food culture, that there’s a lot of really good places to eat now outside of outside of the city.” Then he pauses to correct himself. “Had. We had a burgeoning, interesting and exciting food culture.” He sips his tea, bites a cookie and sighs. “I can’t even talk about the British food scene any longer. I don’t know what it is.”

Though his book is published, the actual history of restaurants, according to Sitwell, is not yet over. As we emerge from the pandemic, he prophesies, I think correctly, that restaurants will return and be more polarized than ever. “There’s still money around.” he says, “So on the very high end, you can pay to have everyone tested. Restaurants are going to exist, even if they’re run by crazy rich people.” And with that, Sitwell takes a last sip of his Earl Grey tea, brushes the crumbs from his sweater, and signs off from his attic in his familial estate in Somerset.