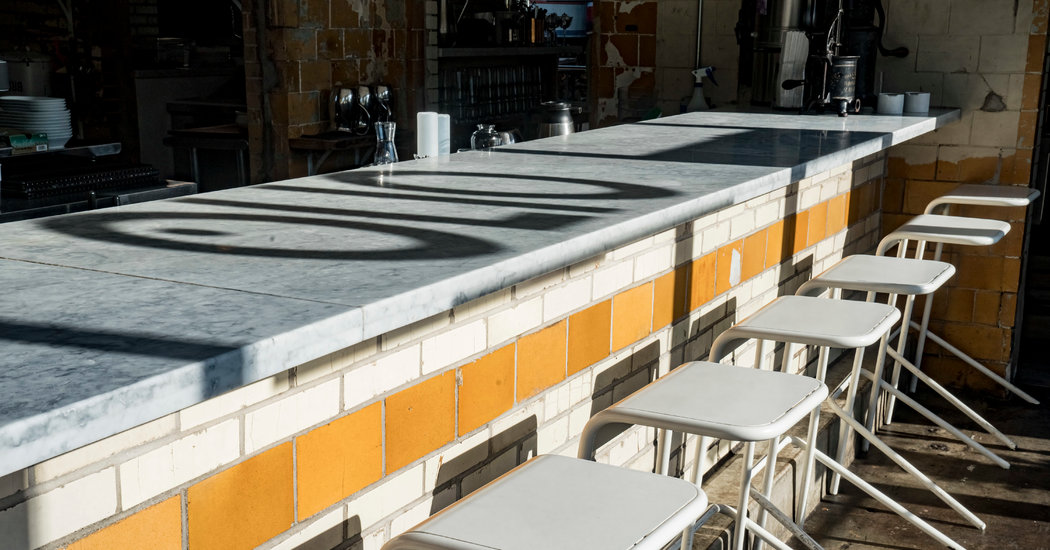 The change in Botanical Heights started with a single restaurant.

Before Olio, an Italian spot fashioned from a boarded-up old gas station, opened in 2012, its St. Louis neighborhood was known mostly as a place to buy illegal drugs. Nearly three-quarters of the lots on some streets were abandoned or demolished, said Brent Crittenden, the chief executive of UIC, the design and redevelopment firm that built Olio and several other restaurants in the neighborhood. By his count, one block was down to fewer than 10 residents.

Today, most of the houses are either occupied or under construction. Earlier this year, you could stand in Olio’s parking lot and see a French pastry shop, a bakery known for its sourdough, a Mexican restaurant where the tuna tostadas are seasoned with white soy sauce, and a new omakase restaurant that has already won national attention. With its streamlined red-striped exterior, Olio was the single beacon that drew people and businesses to Botanical Heights.

The businesses remain, but their doors are locked or their hours are slashed. As St. Louis begins cautious discussions about reopening, no one is sure how many of these food businesses will survive the coronavirus pandemic, and what will happen to Botanical Heights if they do not.

The nation’s cities are peppered with neighborhoods just like it — areas animated in recent years by a huge restaurant boom. In any one of them, the failure of even a few key independent restaurants could spell devastation for their local economies.

While the federal government has created a program to help small businesses, including restaurants, many were largely unable to gain access to the first tranche of $349 billion before the money was depleted. They will also struggle to take advantage of the current $310 billion round because the terms of the program, which require that 75 percent of funds go toward payroll in order to have the loan forgiven, do not seem to take long-term closures into account.

“Restaurants are extremely valuable to cities,” said Andrew Salkin, a founding principal of Resilient Cities Catalyst, a nonprofit focused on strengthening cities, and a former official in New York City’s Finance Department. “The benefit of having good restaurants outweighs just their tax benefits. They are the anchors of communities. They support tourism and the neighborhood they are in.”

The danger facing restaurants, which thrive on crowded rooms and get by on razor-thin margins, poses a special threat to small cities and large towns where a robust food culture plays an outsize role in the economy. In places that had been hollowed out by poverty and suburban flight, like parts of Indianapolis, Cleveland and Detroit, they are engines of growth. In other cities with a national reputation for good food that is out of proportion to their population, like Providence, R.I., or Asheville, N.C., dining is both a tourist attraction and a key part of their identity.

Already, restaurant closures have damaged urban economies in ways that are still being calculated. Of the 701,000 nonfarm jobs lost in the United States in March, nearly 60 percent came from food services and drinking places, according to the Bureau of Labor Statistics.

Restaurants “are major employers of 9.7 million people across the country and are a critical source of revenues for local budgets,” said Amy Liu, the director of the Metropolitan Policy Program at the Brookings Institution. For example, the restaurant industry is Washington’s second-largest private-sector employer, and in 2019 restaurants and bars accounted for $1.3 billion of the city’s sales taxes, up 36 percent from 2014.

A shift in recent years away from suburban living to urbanization began in many ways with a national restaurant boom that many cities now count on to drive both residential and commercial growth. “When an area revives, a leading indicator is always a great restaurant scene,” said Amer Hammour, the executive chairman of Madison Marquette, a large commercial real estate developer.

In Washington, the largest development in the city’s history emerged in 2017 at the waterfront, anchored by 20 restaurants and some of the city’s best-known chefs, like Kwame Onwuachi and Fabio Trabocchi.

A newly energetic dining scene — fueled by chefs whose names are known around the country now — has lifted Washington’s cultural profile and its balance sheet. “The food industry has helped us change the perception of D.C. as a sleepy government town,” said John Falcicchio, the city’s deputy mayor for planning and economic development.

“We have heard estimates that as much as 50 percent of the restaurants that have closed may not reopen,” Mr. Falcicchio said. “That is really troubling when we think of our economy, the job market and the district’s bottom line.” Restaurants like Rose’s Luxury, which was a main driver of putting Washington on the food map, have tried their hand at takeout, and distilleries like Republic Restoratives have moved to making hand sanitizer (free with a bottle of delivered bourbon). But this amounts to little more “than life support, which is better than death but no more,” said Aaron Silverman, the owner of Rose’s Luxury.

For many cities, restaurants have been crucial to their economic revival. A burgeoning new restaurant scene has lifted Detroit, where jobs in the restaurant industry grew 18 percent between 2009 and 2019, the latest year available from the Labor Department.

“This helped Detroit in the macroeconomic sense in getting foot traffic where there hadn’t been any,” said Carol O’Cleireacain, an adjunct professor of public affairs at Columbia University and the former deputy mayor for economic policy in Detroit. “It got more young people to think this was a hip place,” and to choose living in the long-struggling city over its more prosperous suburbs.

The same dynamic helped persuade people to settle in Botanical Heights and other St. Louis neighborhoods.

“It’d be pretty devastating for all of us to lose so much momentum in the area,” Mr. Crittenden said.

When a city’s restaurant scene starts to get national attention, it begets tourism. “When we pitch Providence, whether for leisure tourism or meetings and conventions, we look at things that make us special,” said Kristen Adamo, the president and chief executive of the Providence Warwick Convention and Visitors Bureau. “And a lot of that is you get meals you wouldn’t ordinarily get in a city of about 175,000.”

With pioneering farm-to-table restaurants such as Al Forno, which turns 40 this year, Providence had a head start on many restaurant towns. But people there say it came into its own as a tourist destination only in the past decade or so, with the arrival of places like Birch, Oberlin, North and Big King.

The chef James Mark recalled that when he opened his first restaurant, North, in 2012, Providence used to empty out in the summer. “Over the last five years that’s changed a lot,” he said. “People started vacationing, staying in Providence and taking a day trip out to the beach instead of staying at the beach and taking a day trip to Providence. The draw of the restaurants was so high that they’d stay in Providence to eat.” Leisure travelers kept the occupancy rates of Providence’s hotels at or above 90 percent on weekends from May to November 2019, Ms. Adamo said.

As valuable as independent restaurants are to their cities, though, owners say that most of the federal relief passed so far does not take their needs into account. The government has shown little interest in compelling or helping insurers to pay claims for business interruption caused by the pandemic, something restaurant owners desperately want. Restaurant owners say the Paycheck Protection Program, which provides forgivable loans to small businesses that keep paying workers, is not useful for eateries that may need to remain shuttered or half full for months after other kinds of businesses are fully operational.

“Getting forgiveness is going to be impossible,” said Nina Compton, the owner of Compère Lapin in New Orleans. “How do I make money if I have to bring back all my staff doing less volume and less sales?”

“The people that own independent businesses live where their business is,” said Jane Anderson, the executive director of Asheville’s Independent Restaurant Association, a trade group representing 150 restaurants in Asheville and surrounding Buncombe County.

“With our restaurant organization alone, on an annual basis we’re giving about $1.5 million back to nonprofits — everything from Little League baseball to the local science museum to the Humane Society,” she said.

Mr. Mark said that about 90 percent of his ingredients at Big King come from Rhode Island farmers and fishers. He knows almost all of them. At North, the percentage is closer to 80, not counting the New England wines that make up somewhat less than half the list.

Hand-selecting producers the way he does, Mr. Mark said, is a more costly way to do business and works only when there are enough customers who think the results are worth paying for. This is one reason he worries about the next few months. “Our city doesn’t have that same population of rich people that can afford to support expensive restaurants,” he said. “That’s why this whole thing is so scary for smaller cities.”

Texas Chef Dealing With COVID-19 Restrictions: “I’ve Got A Lot Of People Who Rely On Us” – CBS Dallas / Fort Worth