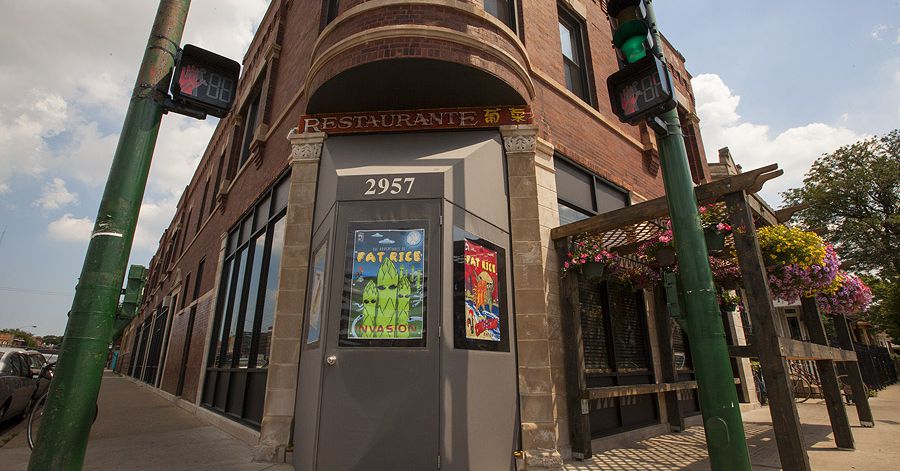 Last week, Abe Conlon and Adrienne Lo put an end to the speculation that started in early April: their Logan Square restaurant, Fat Rice — one of Chicago’s most unique spots thanks to its mix of Asian and Portuguese flavors — was not going to reopen. Instead, they announced that they had decided to transform their acclaimed restaurant into Super Fat Rice Mart, a general store selling $99 meal kits. The transition reflected Conlon and Lo’s belief that COVID-19-related safety concerns will continue to linger for restaurants, and that, for that reason, they needed to take their business in a new direction.

But this isn’t a time to mourn the closing of the the eight-year-old restaurant, Conlon insists. “I think congratulations are in order,” he says. “We’re excited about it.” He and Lo put a lot of thought into their next move: The mart offers them flexibility, and a chance to reopen the dining room in a year or so.

Conlon, who won the 2019 James Beard Award for Best Chef: Great Lakes, adds that he’s very proud of what he and his crew have accomplished. The mart won’t deviate from the restaurant in the sense that he and Lo want to continue “to provide cool experiences for people with delicious food,” he says.

The mart’s meal kits are like a CSA, full of produce from Fat Rice’s favorite vendors. Farmers have been hit hard during the pandemic, and Conlon and Lo want to continue to do business with local farms like Mick Klug Farm and Frillman Farms, both of which grow organic crops. The meal kits’ $99 price tag is due to the high quality of those ingredients, Lo says.

The kits, which Colon says are “fun and interactive” come with a suggested meal plan and are designed to feed two adults with two full days of meals with possible leftovers. They are also meat free. Conlon himself went vegan and quit smoking about three months ago. But meat will still be sold at the mart , where the opening supply of frozen pork dumplings ($35.99) quickly sold out over the weekend. Fresh meat isn’t sold as the store, but Colon says customers are welcome to add their own meat (purchased from another purveyor) to their meals.

Selling a meat-free kit is a departure for Fat Rice, whose signature Arroz Gordo is full of chicken thighs, char siu, linguiça, prawns, and clams. Conlon says he went vegan to be more environmental conscious. Business-wise, the move also makes sense, given the reports about meat shortages and rising prices. It also broadens Fat Rice’s customer base, allowing the kits to be consumed by vegetarian and vegans.

The kits come with seasonings, ingredients, and 30-minute-or-less recipes that will be super-easy to make, Conlon says, with videos for customers to follow online. They’re also working on cocktail kits. Meanwhile, The Bakery at Fat Rice has been closed during the pandemic. Conlon and Lo plan to bring back the egg tarts and Chicago-style hot dog buns from the bakery as make-at-home kits, because, Conlon says, “who doesn’t want to make a hot dog bun with their kid?”

Conlon has never been a fan of labels, which is one of the reasons it’s difficult to describe Fat Rice to someone who has never visited. The food it served had Chinese and Indian influences, among others, and reflected Lo and Conlon’s travels to Macau, a former Portuguese colony. Folks eventually settled on calling Fat Rice Macanese.

Dine-in restaurants in Illinois have remained closed since March 17. On Tuesday, Gov. J.B. Pritzker shared the state’s framework to reopen them as soon as late June. But a lot of things needs to go right to meet that timeline, and that uncertainty has Conlon and others trying to figure out what comes next.

Still, he and Lo are certain that their best move is to keep the Fat Rice name alive in Chicago; the alternative, Conlon jokes, was for the two of them to move to Mexico. So far, they’ve had to furlough about 70 people. They’re unsure of what will happen to their stall at Time Out Market, since the state doesn’t want large gatherings until scientists develop a vaccine. The future is murky. But Super Fat Rice Mart gives Conlon and Lo a chance to buy time as they navigate the industry’s next steps.

“Will it be exactly the way it was?” Lo says. “Most likely not.”