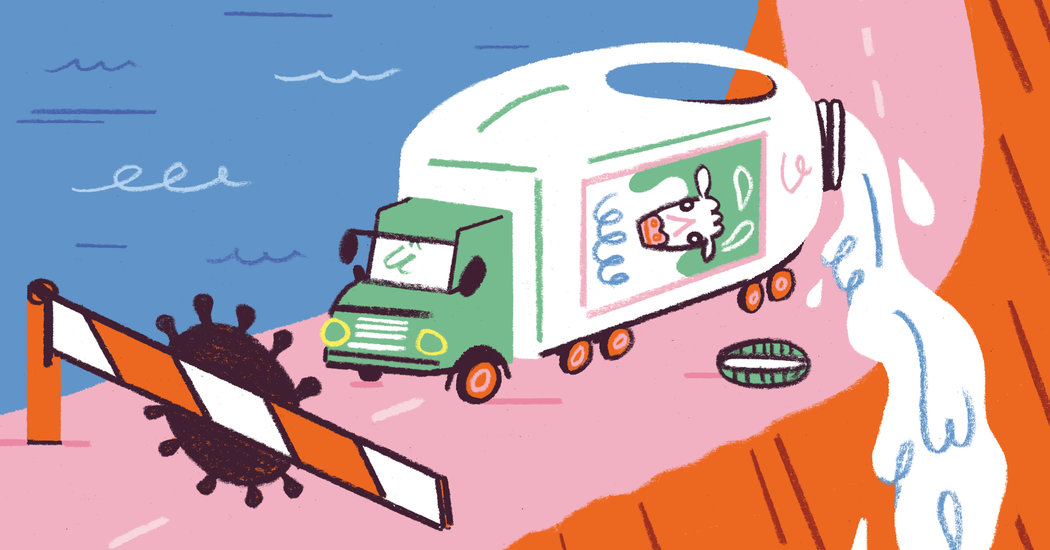 WATERLOO, Ontario — Belgians are being told that they need to increase their consumption of frites. Across Britain, farmers have dumped millions of pints of milk down the drain instead of churning it into butter. In Iran, millions of baby chickens — which may have one day been bound for barbecues — have been buried alive. In India, farmers are feeding strawberries to cattle rather than sending them to markets.

Is this what an “efficient” global food system looks like?

According to the economists, politicians and corporations that have pushed for increasingly interconnected food supply chains over the past 50 years, efficient is what it’s supposed to be: Each country specializes in what it’s best at — potatoes in Belgium, beef in Canada, cocoa in Ghana — and puts it on the global market. Producers and processors within countries specialize, too, as a way to minimize costs. As a result, at least in theory, prices stay low, the world gets fed and everyone wins.

The coronavirus has revealed that there are serious weaknesses with relying too much on this approach. Improving efficiency can certainly be a good thing, especially if consumers benefit from cost savings and access to more diverse foods. But the changes in recent years have undermined other important goals, like the ability to adapt during a crisis. When new barriers prevent food from reaching its markets, or demand suddenly drops — both of which are happening now — the system falls apart.

The current breakdown is the product of multiple disruptions that the food system is ill-equipped to handle: lockdowns, closed borders, trade restrictions and the virus itself. Any one of these would have caused problems in the world’s complex and specialized food supply chains. All of them happening at the same time is wreaking havoc.

International trade in food dates back centuries — ancient Romans traded wine across the Mediterranean; spices traveled the medieval Silk Road — but since the 1970s, when agricultural industrialization began to really speed up, more and more people have relied on another country for providing at least part of their dinner. International food trade has increased nearly fivefold since the 1990s, when governments agreed to new rules to open up food trade. Today, nearly a quarter of all food produced crosses a border.

Large transnational corporations saw an opportunity to profit from these changes and are now pivotal players in the trade, processing and packaging of food. As we have seen with the emergence of megasized companies that dominate entire sectors in the rest of the economy, the largest of the food and agriculture businesses have been steadily buying up their rivals in recent years and command enormous power.

These changes fundamentally transformed food systems that once were more localized and diverse to be more specialized, distant and corporate controlled. Farmers increasingly contract to produce single commodities — crops, meat, dairy — for just a handful of large transnational corporate buyers that process and market it. A food system organized in this way may be “efficient” in terms of delivering lower prices, but it also has costs: to the environment, to social inequality and, as the pandemic has revealed, to flexibility in the face of disruption.

Specialization makes it hard to shift into different markets when disruptions arise. Belgium, one of the world’s leading exporters of potatoes, lost sales not only to local shuttered restaurants but also to other European countries and China because of lockdowns. At least the Belgians can try to eat the potatoes at home. That strategy won’t work for every crop: Ivory Coast and Ghana, the world’s top two cocoa exporters, lost markets across Europe and Asia when people started focusing on buying essential items during the lockdowns instead of chocolate.

The loss in export income in Africa more generally could have huge ramifications if the pandemic continues, as many countries on the continent rely heavily on imported wheat and rice. The prices of these grains have soared not only because of rising demand for these staple grains during the crisis, but also because a few countries — including Russia and Vietnam — imposed export restrictions out of fear that sending food abroad would lead to higher prices at home. (Other countries, like Canada, are reaping profits from elevated wheat prices.)

Concentrated markets dominated by just a handful of companies create narrow bottlenecks that heighten food system fragility. The meatpacking industry is one of the most concentrated in the United States, and in many other countries around the world. In Canada, just three meatpacking plants process over 95 percent of the country’s beef and nearly all of its beef exports. In both the United States and Canada, meat processing plants have had to temporarily shut down because of outbreaks of Covid-19 among workers.

The meatpacking disruptions also highlight other consequences of the food system’s drive for efficiency: its reliance on poorly treated workers, many of whom are immigrants and people of color, and its dependence on seasonal migrant labor, as evidenced by the fact that travel shutdowns have led to widespread labor shortages across Europe and North America. And this isn’t just about justice, as important as that is: If the people who keep food supply chains moving are made vulnerable by unsafe working conditions, low wages and closed borders, the entire food system is vulnerable.

Seeing the spoiled dairy products, rotten vegetables and needlessly culled animals across the world should force all of us to rethink our “efficient” food supplies and try to create a system that is better able to withstand shocks. We need to rejuvenate local and regional food systems to reduce the vulnerabilities that come with being too reliant on imported and corporate-dominated foods. This doesn’t mean cutting off all trade or abolishing all packaged foods, but it does mean building diversity, decent livelihoods for workers and opportunities for small and medium-scale enterprises to flourish in shorter, more sustainable food supply chains that are closer to home.

One place to start is for governments to shift their support from the large-scale, specialized and export-oriented food system to building infrastructure for more diverse local food production, processing and markets. In North America and around the world, small-scale and organic producers have been overwhelmed with the surge in interest from customers who want to buy directly from farmers during the crisis. But these producers often lack the infrastructure to meet that demand. As governments around the world pass stimulus packages to address the crisis, building more diverse and localized food systems should be an obvious inclusion.

For decades, alternative food movements promoting local markets and sustainable production methods have sought to expand their reach in the face of growing social inequities and a changing climate. But lower prices and abundant supply offered by the global food system were serious headwinds. Now that the pandemic has shown just how fragile that system is, it is time to seize the moment to build real change that prioritizes diversity and resilience.

Jennifer Clapp is a professor in the School of Environment, Resources and Sustainability at the University of Waterloo in Ontario and the author, most recently, of “Food.”