NEARLY 450,000 FANS subscribe to Rachel Ama’s vegan cooking channel on YouTube. It’s not hard to see why. Appearing in her family kitchen, the Londoner makes up dances, punctuates her jokes with sound effects and cooks brightly colored, approachable food that ranges from vegetable pastas to Caribbean rice and peas. Many of the viewers who email her tell her they’re not vegan. They just like the look of the food.

What benefits have you found from a plant-based diet? Join the conversation below.

Ms. Ama’s success—and that of a generation of vegan cookbook authors, social media stars and restaurant chefs—reflects a flourishing of this kind of cooking unimaginable even 20 years ago. The food is visually striking, global and farm-to-table. Its appeal is clear to omnivores. When so many of us are immobilized in our houses, cookbooks like “Rachel Ama’s Vegan Eats,” Bryant Terry’s “Vegetable Kingdom” and Joy Yonan’s “Cool Beans” are top sellers. Perhaps we’re all a little vegan now.

For a raw foodist of the 1910s or an activist vegan punk of the 1980s, to cook without meat, dairy, eggs or honey meant adopting a spartan diet that leaned toward the brown and chewy. But beginning in the 1990s, rumblings of change could be felt at the high end of dining. At Millennium, which opened in San Francisco in 1994, Eric Tucker approached vegan cooking as a creative challenge: Without the flavor props of animal proteins, how could he make vegan food intensely savory? He drew robust flavors from vegetables by caramelizing them, amped up the umami of sauces with miso and dried mushrooms. Still, this kind of cuisine was considered niche.

By the turn of the millennium, other versions of veganism were gaining traction in the U.S. and Britain, influenced by immigrant cooking traditions—spice-rich Jamaican ital cooking, Vietnamese and Chinese Buddhist vegetarian food. And food-justice activists and hip-hop artists were embracing the potential of vegan food to nourish communities where racial and economic disenfranchisement had, historically, taken a toll on health.

“
The realization sets in that not every meal can be a glass of Oatly milk and a Lightlife bratwurst.
”

Health concerns have been a major driver of the mainstream vegan upswell of the past five years, too. One influential publication based on large-scale epidemiological research, T. Colin Campbell and Thomas M. Campbell II’s 2005 “China Study,” found plant-based diets prevented or reversed heart disease, diabetes and even some cancers.

A Gallup poll from September 2019 found that one quarter of respondents had cut back on eating meat in the last year. Among women and nonwhite subjects, the figure was closer to one third. And while the overall proportion of Americans who consider themselves vegan or vegetarian has held steady at around 5% for decades, according to the 2018 results of a recurring Gallup poll, within that figure, 9% of people of color now call themselves vegetarian, compared to 3% of white respondents.

Annual U.S. sales of plant-based foods have grown from $3.9 billion to $5 billion in just two years, according to a report from the Plant-Based Foods Association, and milk alternatives now make up 14% of the overall dairy market. Impossible Foods’ and

While convenience foods have helped some people make the switch, at a certain point, the realization sets in that not every meal can be a glass of Oatly milk and a Lightlife bratwurst. In 2014, when Ms. Ama went vegan—spurred primarily by concerns about animal rights, the environment and health—her politics butted up against her predilections. She had grown up in multicultural London, in a family that’s West African, Caribbean and Welsh. “I didn’t really see the flavors I’d be excited to eat,” she said. She started recording cooking videos, in part, to create that cuisine.

Lara Hamilton, owner of Book Larder, a culinary bookshop in Seattle, said that in the past four to five years, vegetarian and vegan cookbooks have gained a significant share of the market. Alongside books by celebrity vegans such as Isa Chandra Moskowitz and Matthew Kenney, she also stocks vegan-cupcake and vegan-paleo titles. Online, YouTubers such as Gaz Oakley (“Avant-Garde Vegan”) and Sadia Badiei (“Pick Up Limes”) have hit the one-million-subscribers mark; Instagram now has 92 million posts tagged #vegan.

While it is increasingly clear that there is no one vegan cuisine, three prominent strains have emerged. There is the comfort-food vegan of White Castle’s Impossible Sliders and Cinnaholic’s egg- and dairy-free cinnamon rolls. This approach embraces big flavors and meat substitutes, and pooh-poohs any concern over calories. On the opposite end of the spectrum is vegan health food, the cuisine of juice detoxes, the rumored “vegan glow” and much of the menu at fast-casual chain Sweetgreen.

The third strain of contemporary plant-based cooking might be called cheffy vegan. Just as Alice Waters once used California cuisine to promote sustainable, local agriculture, this strain of vegan cuisine operates on the notion that aesthetics can sell the ethics.

While you won’t find the word “vegan” on the cover of “Cool Beans,” Mr. Yonan insisted to his publishers that the recipes had to be 100% plant-based. “I wanted to make sure that the beans weren’t hiding behind anything, that they really spoke for themselves,” he said.

Mr. Yonan said he was inspired in part by “unapologetically plant-based” restaurants such as Vedge in Philadelphia. Owners Rich Landau and Kate Jacoby started their first restaurant in 1994 in a natural foods store; when they opened Vedge in 2011, they took a new approach. “This time, the focus wasn’t going to be on the proteins but on the vegetables,” Ms. Jacoby said. Inspired by produce from small-scale organic farms in their region, they jettisoned grilled seitan entrees in favor of small plates like their famous “fancy radish” appetizer, a Kandinsky-like composition of roasted and raw heirloom varieties.

As we head into another month of dining in, home cooking, too, has to interest everyone at the table. Omnivores and vegans alike will appreciate the recipes at right: colorful, flavorful, a far cry from brown and chewy.

Vegan cookbooks through the decades

This Seventh Day Adventist tome set a tone for American veganism: straight-up health food heavy on the sprouts and granola.

The Farm, a Tennessee commune established in the early 1970s, embraced “pure vegetarianism.” In line with the community’s scant resources, recipes like fried tempeh and soybeans with whole-wheat tortillas are cheap and simple.

’Soy, Not Oi!‘ by Hippycore Krew

Now out of print, this zine-like cookbook, rife with in-jokes and hardcore punk music references, captured the intersection of punk and animal-rights activism.

Millennium, which opened in 1994, made Mr. Tucker the West Coast’s first vegan celebrity chef. His dishes range across international cuisines, and pastry chef Sasha Weiss’s recipes trained a generation of professional bakers how to work without eggs and dairy.

This bestselling book and the cookbooks in the franchise that followed sneaked in an animal-rights agenda under a mountain of health claims and wrapped its message in a frilly chick-lit bow. It launched the era of veganism as beauty cuisine.

Ms. Moskowitz and Ms. Romero were the breakout vegan stars of the food-blog era. This hefty compendium is still the best gift for people learning to cook vegan food, replete with approachable recipes. 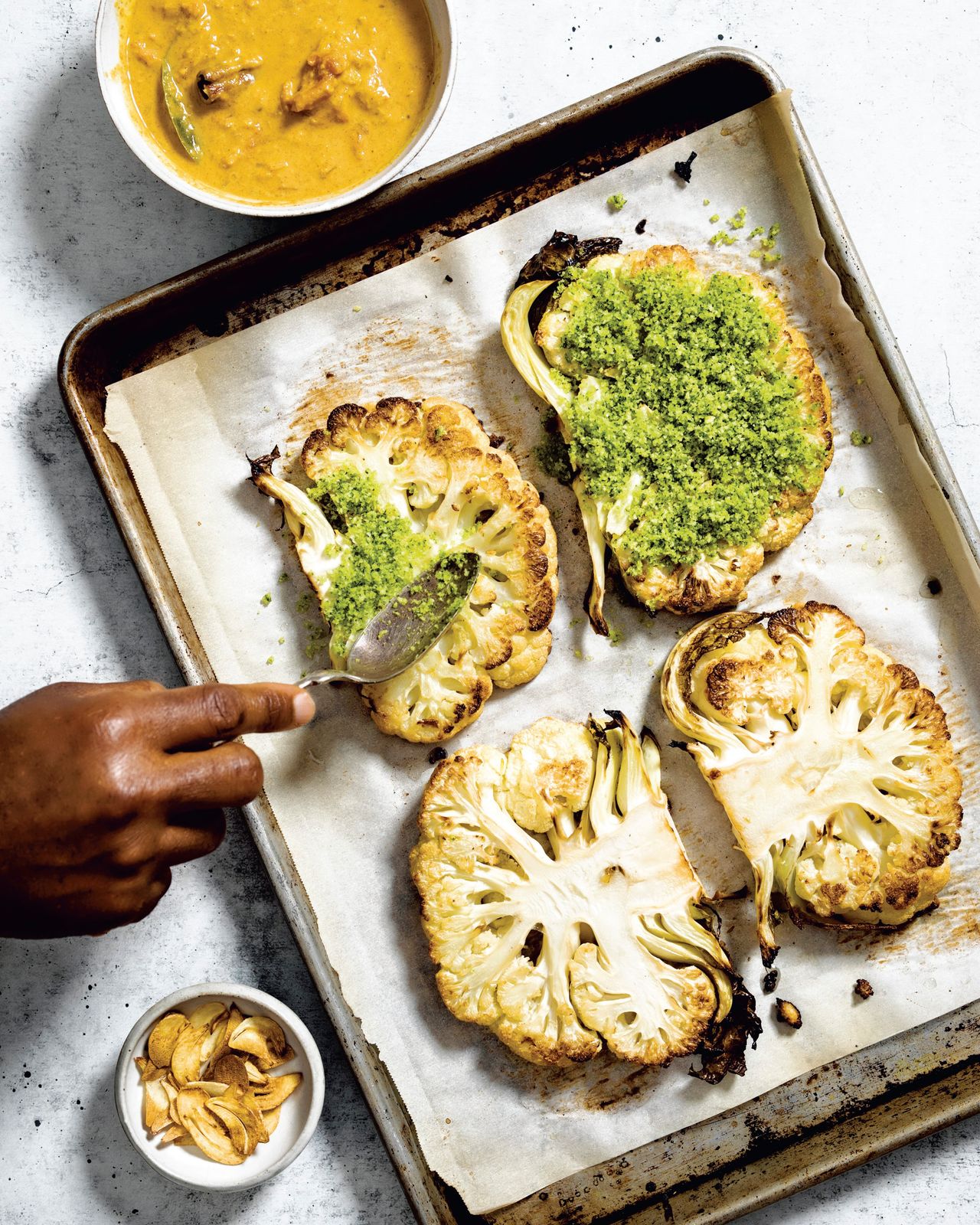 In “Rachel Ama’s Vegan Kitchen,” the YouTube star says that her mother fell in love with peanut stew when spending summers with family in Sierra Leone. Ms. Ama was thrilled to get her mother’s blessing on this vegan version. It is rich but not cloyingly so, and the spicy steam emanating from the stove is the best kind of aromatherapy. It adapts particularly well to a pandemic pantry. Don’t have canned black-eyed peas? Chickpeas will do. Frozen spinach is easily swapped for fresh. So is chard or kale. Ms. Ama calls for incendiary Scotch bonnet chiles, but if you prefer a milder fresh chile, that works, too. 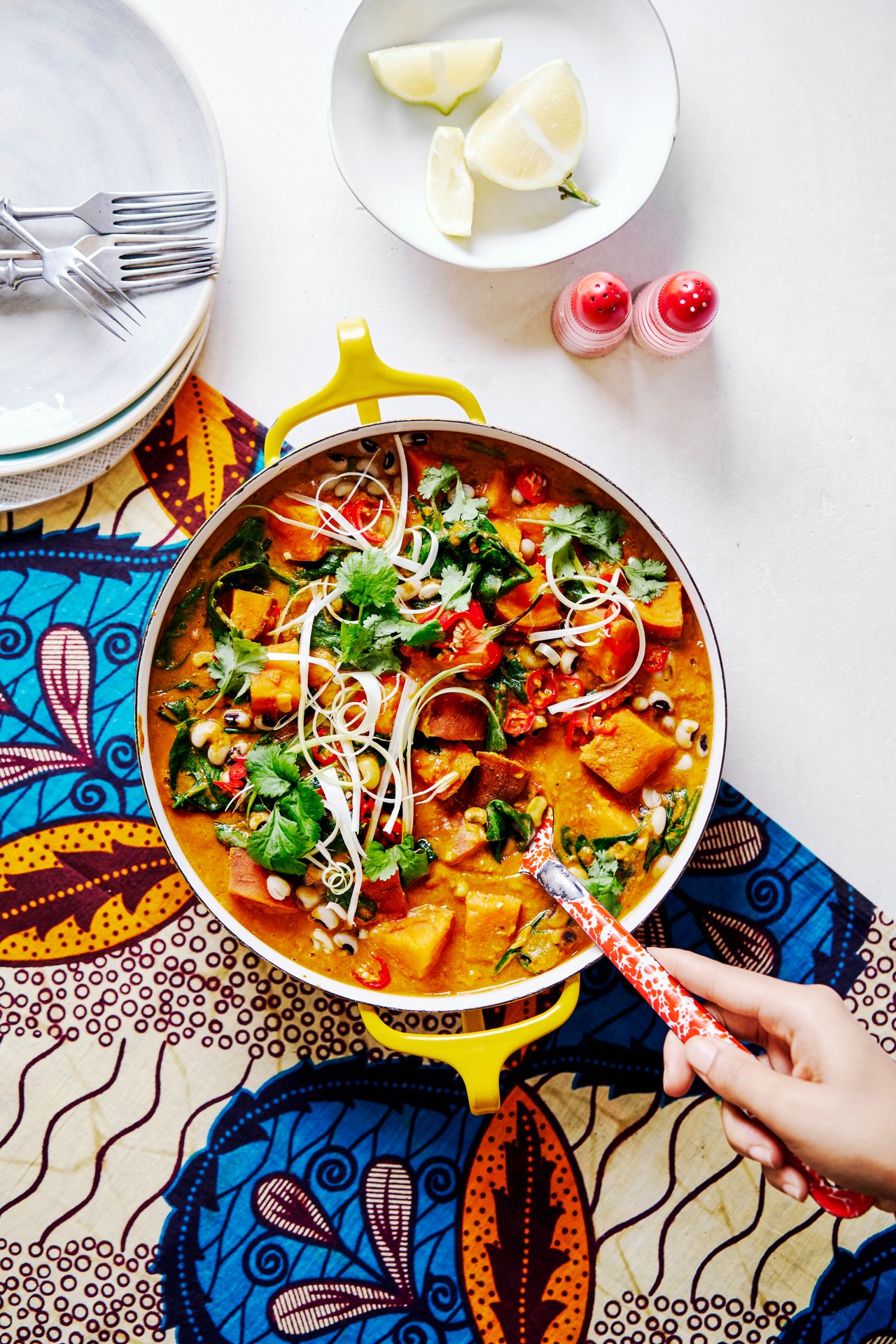 In his book “Vegetable Kingdom,” Bryant Terry writes, “When I lived in New Orleans, ordering a vegetarian po’boy meant you would get bread, mayonnaise, iceberg lettuce and bland tomatoes. This recipe is the type of sandwich that I wish my crew and I could have eaten back in the day.” The sweet potatoes are marinated in miso, molasses, sesame oil and tamari, coated in blackened seasoning and roasted. But first they’re parboiled, which yields a sweeter, creamier result. Asparagus, in season now, makes a good match, as does the tangy Creole rémoulade. 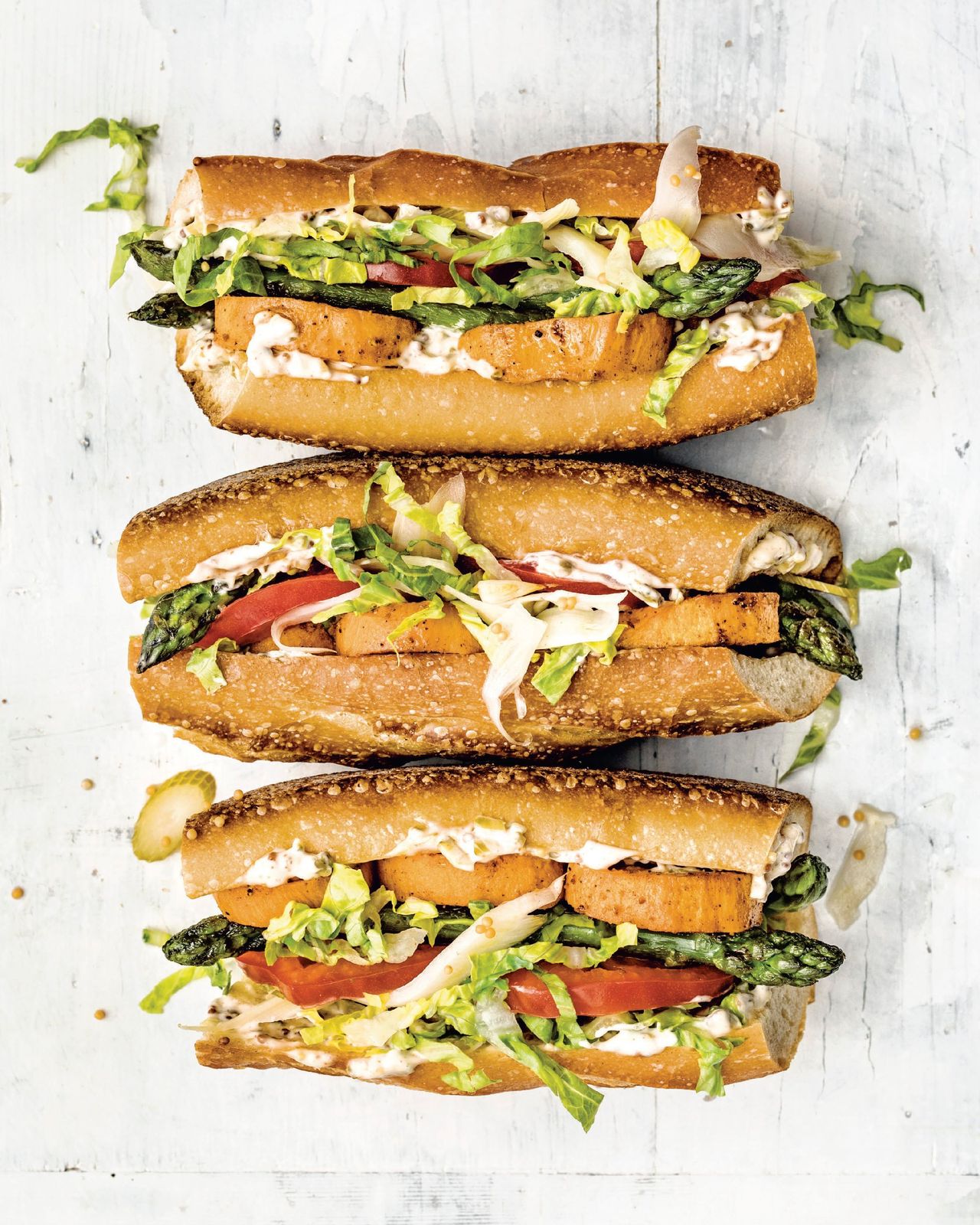 For his cookbook “Cool Beans,” Joe Yonan adapted this recipe from Brad Deboy, chef of Ellē in Washington, D.C. It’s invisibly vegan—the bright, creative mix of flavors is its primary virtue. Vegans have long pureed silken tofu into creamy dressings. Here, Mr. Yonan combines the flavors of Thai green curry and Green Goddess dressing without insulting either, and the lentils and seeds add a satisfying crunch. If you can’t find black lentils, any small lentils or mung beans will substitute, though you may have to cook them longer. Save the remaining dressing for future salads, roast vegetables and sandwiches.

What Is Honeycomb Pasta? How to Make This Viral TikTok Recipe With Just 4 Ingredients – GoodHousekeeping.com

BBF, From the Celebrated Chef of Kyo Ya, Opens – The New York Times