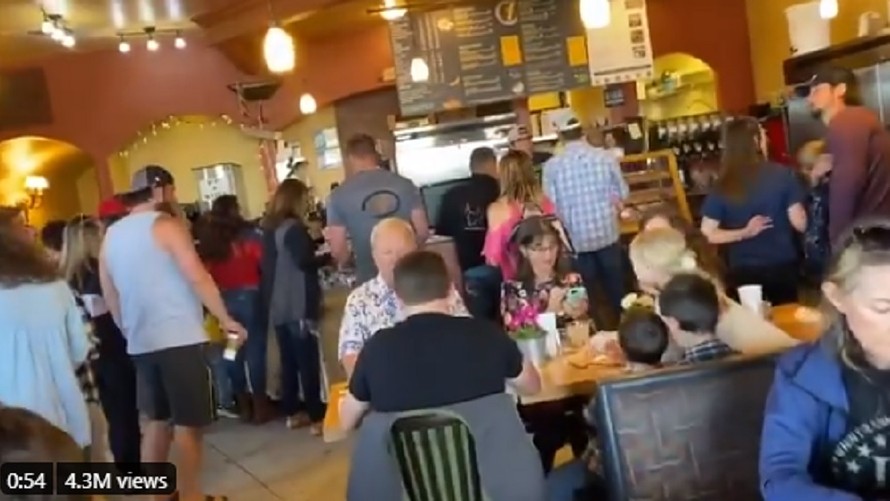 Update: State health officials shut down the restaurant Monday for at least 30 days.

C&C Coffee and Kitchen had had enough of all the coronavirus restrictions and, through its Twitter
TWTR,
+0.40%
feed, let President Donald Trump know it was about to take action:

What exactly did it mean by taking this stand?

The Castle Rock, Colo., shop opened its doors for Mother’s Day in defiance of the state’s public health order limiting restaurants to takeout and delivery services.

And the public responded. Check out this clip, which has been viewed more than 4 million times:

So much for social distancing.

The crowd, however, wasn’t a welcome sight for at least one customer, who called it “unbelievable,” and, according to the Denver Post, filed a complaint with the Tri-County Health Department.

“I wasn’t even going to eat the food even if I had gotten it,” said Nick Whitehill, who was there for a curbside pickup order. “I walked in, took the picture and turned right around.”

He wasn’t the only one taking issue with the restaurant’s decision to flout the order. Here’s a tweet from Chris Fuselier, owner of Denver’s Blake Street Tavern:

The governor’s office issued a statement Sunday condemning the move. “These restaurants are not only breaking the law, they are endangering the lives of their staff, customers, and community,” said deputy press secretary Shelby Wieman from the governor’s office.

C&C Coffee and Kitchen owner April Arellano, who told KDVR that some 500 people showed up throughout the day, explained the move in a Facebook
FB,
+0.90%
post, saying the restaurant would go out of business if she didn’t start bringing in customers.

“We are so behind,” she said in a comment. “We have complied for two months. We cannot make it on $200/day sales when 2 staff cost me $250 not counting, food, cost, utilities and rent.”

If the sign greeting those entering the restaurant was any indications, customers knew what they were getting into.

“ATTENTION: Our freedom doesn’t end where your fear begins,” the welcome message reads. “If you are afraid to be within 6 feet of another person, do not enter this business!”

State health officials shut down the restaurant Monday for at least 30 days, the Denver Post reported, with Gov. Jared Polis calling it an “immediate health hazard.”

“If the state didn’t act and more businesses followed suit, it’s a near-guarantee that people would lose their lives and it would further delay the opening of legitimate businesses,” Polis said.