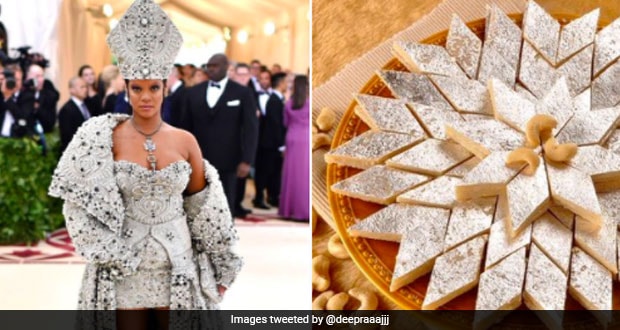 HighlightsA Twitter thread compared Rihanna’s fashion with Indian foodThe thread soon went viral on the platformTake a look at some of the best comparisonsWe often see celebrities donning various offbeat and intriguing outfits for a number of global events, whether at the Met Gala or the Cannes Film Festival. These looks are compared by netizens, linking the eccentric fashion numbers to cartoon characters or even regular household items. But in the times of lockdown, since none of these events are happening – netizens found their own way of having fun with bizarre fashion. A thread on Twitter has taken popular singer Rihanna’s outfits over the years and compared it to delicious Indian food items. Foodies rejoiced as the thread went viral on the micro-blogging website. Take a look at some of the viral tweets:rihanna as indian food/snacks [a thread] pic.twitter.com/9SALprJvNA— deepraj (@deepraaajjj) May 11, 2020pic.twitter.com/K9s9rDBtKq— deepraj (@deepraaajjj) May 11, 2020pic.twitter.com/fT2wj6svQz— deepraj (@deepraaajjj) May 11, 2020pic.twitter.com/cHvXYXmXMq— deepraj (@deepraaajjj) May 11, 2020pic.twitter.com/OJbHXiAArL— deepraj (@deepraaajjj) May 11, 2020(Also Read: Katy Perry Dresses Up As Cheeseburger For After-Party; Twitter Reacts)The thread began with a comparison of Rihanna with the much-loved snack Tandoori Chicken. Several other tweets had Rihanna being put at par with popular street-food items such as Kaju Katli, masala Chai, Rose sherbet and even besan laddoo! The Twitter thread by a handle @Deepraaajjj soon took the internet by storm, garnering over 110K likes and 28k retweets.The comparisons were completely accurate and right on point, thus striking a chord with thousands of Twitter users. The fact that Rihanna’s outfits bore an uncanny similarity to the most-loved and favourite Indian dishes was the icing on the cake. Twitterati poured in reactions thanking the creator for making this amazing thread and making the Internet a better place. Take a look at some reactions:This is why they invented the Internet. ????— Hiren Joshi (@htown747) May 11, 2020The Rooh Afza killed me.— FORM A WALL (@_shireenahmed_) May 11, 2020Favorite food + Favorite lady.
Wow. What a moment. I’ve been waiting my whe life for this collab.— .unsuitable. (@KJihan) May 12, 2020Whole another level of #socialmedia creativity . ????— Mr Wonderful ???? (@aamirsfo) May 12, 2020I literally just kept looking at the food the whole time ????— Neeru???? (@galekafanda) May 11, 2020Literally a snack ????????????— BadGalMoni ????✨ (@emonitrinity) May 12, 2020You’ve done a wonderful job at this thread ????????????— badassbrownactivist ???????? (@badassflowerbby) May 11, 2020(Also Read: Puff Pastry From 1995 Found In Man’s Freezer, Twitter Thread Goes Viral)What do you think about this Twitter thread? Tell us in the comments below. Comments

We Opened Our Dream Restaurant. Coronavirus Forced Us to Shut It Two Days Later. – Grub Street

Running out of baking supplies? Cornwall Bakery in Grosse Pointe Park has you covered – WDIV ClickOnDetroit