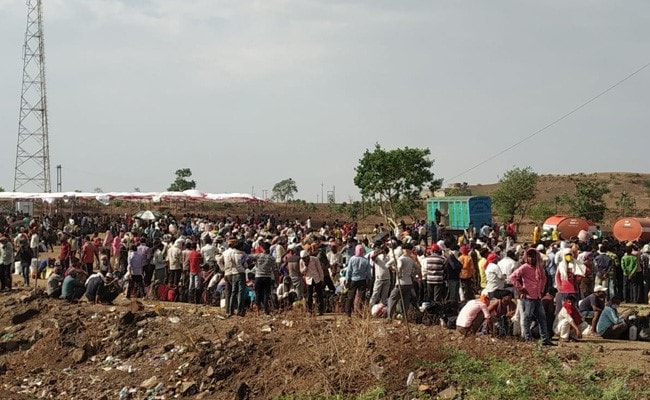 Violence erupted in the town of Sendhwa, located on Madhya Pradesh-Maharashtra border, on Thursday as thousands of migrant workers went on warpath after traffic was jammed on the National Highway 3. The migrants alleged that Madhya Pradesh government has made no arrangement of food or transportation for them.

Cellphone videos from the spot showed hundreds of people, screaming and running on the shoulder beside the highway. Reports from the spot said they threw stones at the police stationed at the spot.

“People here are travelling with month-old babies. The Maharashtra government sent us till here, but the MP government is extending no help to us. We have been here since last night, hungry and thirsty,” said Sailesh Tripathi, a resident of Madhya Pradesh, who works in Pune. The area where they were is a jungle and there was no security. “No one cares about us,” said the man, who is bound for Satna.

District Collector Amit Tomar, said the stone-pelting took place “as some migrants felt after the buses left, there would not be any more vehicles for those left behind, but we  reassured them and calmed them down”.

The migrants were sent to transit points in different districts in 135 buses from the border, he said.

The administration is providing facilities like “food, water, shelter to labourers who are coming in their own vehicles or through other conveyances and providing facility of buses to others who are entering Madhya Pradesh walking from Maharashtra’s border,” the official added.

This was not the first time the city was witness to such an event. On May 3 too, over a thousand workers staged protest in Barwani after the district was sealed.

Demanding that they be allowed to enter and continue the journey to their villages, the labourers blocked the Agra-Mumbai national highway. Asked to move away from the highway, they started throwing stones at the police.

For Madhya Pradesh, the challenge of transporting the labourers to their destinations is a more than other states given its location. It has to take care of not only its own migrants who are on way home from other states but also those on way to Uttar Pradesh and Bihar and ferry them to the borders of their states.

Located in Barwani district, Sendhwa is a crucial stop for the migrant labourers from Maharashtra taking the road to go to Bihar and Uttar Pradesh. Every day, thousands of migrants pour into town, from where they take buses and trucks for the onward journey.

The maximum pressure is at Bijasan Ghat on the border of Sendhwa, where 5,000 to 6,000 labourers reach every day.

The administration said over the last three days, nearly 15,000 labourers have been served food at Sendhwa.

Chief Minister Shivraj Singh Chouhan has appealed to the labourers to have patience, saying they will be transported free of cost by buses after medical checkups and a meal.

The Madhya Pradesh government, he said, will ensure that every labourer reaches home.

After clothes, it’s time to upcycle your food – Times of India