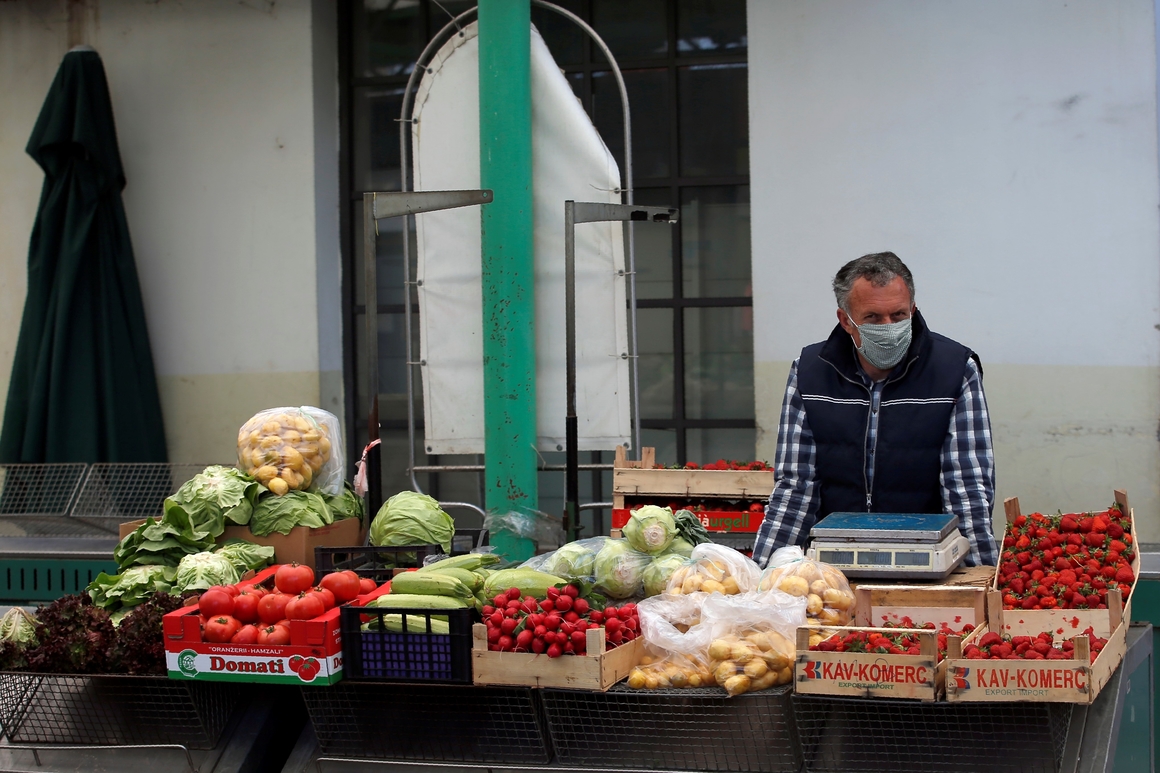 A grocery seller wearing a face mask against the spread of coronavirus waits at a market in Belgrade, Serbia, on April 22, 2020. | Darko Vojinovic/AP Photo

Europe’s gastronationalists have a new excuse: recovery from the coronavirus crisis.

Governments are seizing on the pandemic to push a protectionist agenda that equates eating local products with patriotism — and some are warning that this kind of culinary jingoism threatens the EU’s single market.

“I am calling for food patriotism, for agricultural patriotism,” declared France’s Agriculture Minister Didier Guillaume on the radio this week, exhorting citizens to boost French farmers’ competitiveness by buying French strawberries and tomatoes over Spanish ones, even though they’re pricier.

Other countries have gone further than France.

The Polish government named and shamed 15 domestic processors for importing milk from other EU countries, instead of buying it from Polish farmers.

“The economic patriotism of these businesses raises concerns,” the government said in a statement that has remained online, even after the removal of the list of dairy plants that used foreign milk in the first quarter of 2020.

The move drew the ire of the Polish dairy association, which told Poland’s Agriculture Minister Jan Krzysztof Ardanowski in a letter seen by POLITICO that the companies imported less than 1 percent of foreign milk and that this has no impact on milk prices.

“The country which is proud of its high-quality food exports should refrain from any protectionist initiatives, for its own safety,” the association said in a statement, stressing that the Polish dairy sector exports around 30 percent of its milk production.

In Austria, Agriculture Minister Elisabeth Köstinger announced Tuesday that the government is working on a “regional bonus” for food.

Local foods would be granted certain advantages to strengthen the sectors hit by the coronavirus crisis, Austrian media reported. But the government also notes that it will have to ensure this complies with international trade and EU standards.

Since March, the French government has been in talks with the country’s supermarkets over buying local fresh food. As a result, the biggest French retail chains, like Carrefour and E.Leclerc have switched almost all of their supplies to local farms.

The President of the National Farmers’ Union of England and Wales Minette Batters this month told lawmakers in the House of Commons she will be writing to the government to press for 100 percent procurement of British food wherever possible.

Similar calls have been made by the Portuguese, Greek and Bulgarian ministries.

Meanwhile, the market for many agricultural goods has been rocked by the closure of restaurants in national lockdowns, prompting more calls for Europeans to eat patriotically.

Belgians have been told to eat more fries, the French urged to eat more fancy cheese, and Brits will be told to drink more tea (as long as it contains milk) to combat the combination of oversupply and falling demand.

This inward turn has made some powerful figures worried about the consequences for fair competition in the EU’s single market.

“Cross-border supply chains and the free movement of goods are crucial for guaranteeing the security of supply to citizens. And that is why I warn against ‘consumer nationalism.’ This is only supposedly a strength that quickly fades away. We must not jeopardize the achievements of the internal market,” she said in a statement.

The distribution of national state aid for crisis-hit farmers is another source of disquiet in Brussels.

Eight EU countries have taken advantage of the European Commission’s temporarily relaxed competition rules to pledge their farmers a total of more than €1.2 billion in state aid, according to EU Agriculture Commissioner Janusz Wojciechowski.

But Wojciechowski himself later told journalists: “We should monitor the situation because there is a risk that it will be not good for the fair competition, for the common market.”

All EU farmers already benefit from far laxer antitrust rules on price setting and forming cartels than other industries, but there is a risk, some say, that a state aid splurge by richer countries will drive an even fatter wedge between farmers’ relative competitiveness across the bloc.

Brussels has cleared state aid packages such as €30 million for Finnish farmers, over €35.5 million for Latvian farmers and a €100 million loan guarantee scheme for Italian agricultural SMEs.

But one of the biggest bailouts the Commission has approved is a €650 million package in the Netherlands, to help its producers of flowers, potatoes and vegetables.

Polish Prime Minister Mateusz Morawiecki wrote to Wojciechowski in a letter seen by POLITICO arguing that state aid, though “necessary,” creates “a new risk — a drastic deepening of the development gaps and conditions of agricultural competition in the EU common market.”

Juan Corbalán García, the Brussels head of Spanish agri-food lobby Cooperativas Agro-alimentarias, said: “The Netherlands can support its sector with a level of support that the rest of the European market cannot and in the end we will have a market with unfair competition.”

“If I were a potato farmer in other countries I would think that having this Dutch fund, which allows for almost 1 million tons of potatoes destined for processing to be taken off the market, is helping everybody,” he said.

A European Commission spokesperson said that by limiting agricultural state aid to €100,000 per farm, the new antitrust framework “aims at avoiding that member states overcompensate their own companies, therefore preventing undue distortions to the level playing field in the single market.”