For some, being able to frequent Italy’s bars and restaurants on Monday after more than two months of lockdown was akin to ending a strict dietary regime.

“I can taste the fullness of the flavour much more,” said Sandro Urbani as he drank a glass of white Sangiovanni wine outside Caffè Barrique in the Umbrian town of Orvieto. “It’s as if I’ve been on a diet over the past few months and all of a sudden I can eat a slice of salami.”

Italians have been given another taste of freedom with the reopening of bars, restaurants, hairdressers and all other retailers on Monday as the country tries to revive its economy after the coronavirus emergency.

People have been able to buy takeout food and drink since 4 May, but now they can resume the embedded cultural habit of having their coffee at the bar, albeit with physical distancing. 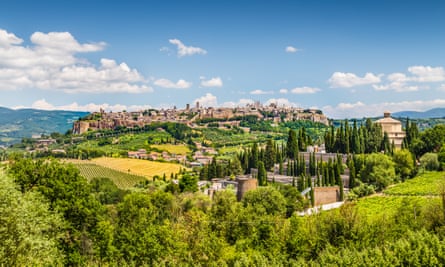 In Rome, San Marcello, a small and usually thriving bar and restaurant close to the Trevi Fountain, welcomed back some of its regulars.

“They were happy to be able to come and drink coffee in a proper cup at the bar, which is what we’re used to here in Italy,” said the manager, Giuseppe Botrugno. “So today felt like an injection of confidence. But we can only allow three people inside at a time, so for now we’ll only be serving snacks and drinks at the bar, and doing food for takeaway.”

But while the bars enjoyed a flurry of customers, the first day back for restaurants was more subdued, with many still closed as they prepare their premises for reopening.

“We had around six customers over lunchtime,” said Chiara Gargioli of Armando al Pantheon, a popular, family-run trattoria in Rome’s historic centre. “A small number, but it was OK. They were all people who we know.”

Italy was the first country in Europe to enforce a nationwide lockdown and is gradually emerging from it. Since 4 May, when manufacturing resumed, parks reopened and people were allowed to visit relatives and partners, there has been a sustained fall in the coronavirus death and contagion rate. 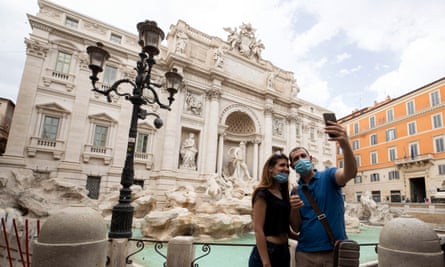 As part of the ongoing phase two, which has been called “living with the virus”, civil liberties now include being able to travel freely within individual regions and to see friends. Restrictions on inter-regional travel will be lifted from 3 June.

But while people are venturing out more and businesses can trade again, with the virus still circulating, for the most part they are doing so cautiously.

Along Orvieto’s main thoroughfare only one restaurant, Gallo d’Oro, opened for lunch, and the only customer was the Guardian. Other restaurants are expected to follow suit later this week. Owners need to ensure that tables are at least 1 metre apart and are disinfected between sittings. Customers must pre-book and wear masks as they enter a restaurant and whenever they leave their tables. Staff must wear masks and gloves at all times. Hand disinfectant and plastic gloves are available for customers outside Gallo d’Oro before they enter.

“After all this time indoors, we just wanted to try and get going again and regain some sort of normality, even though our expectations were not high,” said Titiana Corbi, who manages the restaurant. “A few people have called out of curiosity, but we are yet to take any bookings.”

Italians may be hesitant about eating out, but they were keen to get back the hairdresser. Anna Paciaccone, who runs a salon a short walk away from Gallo d’Oro, has been busy since she opened. “People booked before today and had to specify exactly what they wanted over the phone. The distancing rules have so far worked really well.”