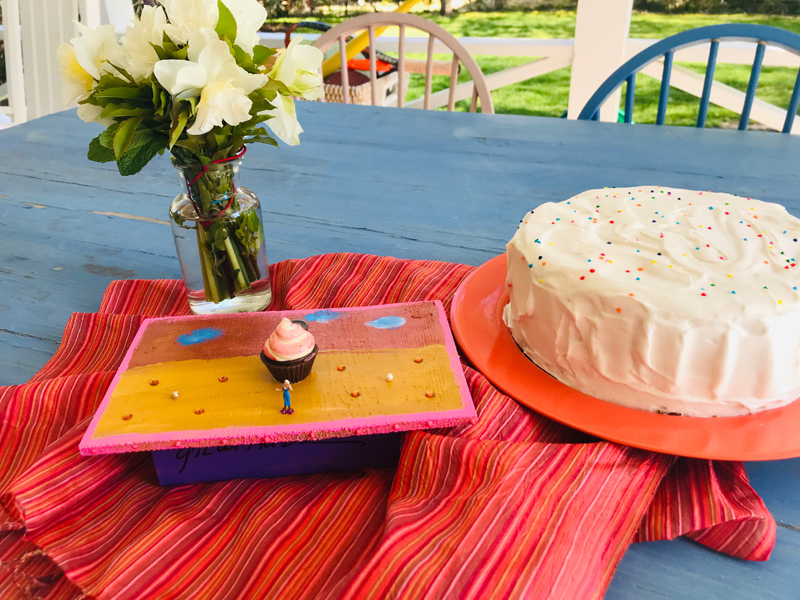 It wasn’t Anja May’s birthday, or any type of special occasion for that matter, so she was a bit surprised to find a cake and flowers from Polly Simpkins on her front porch one day last month. “I actually got a call ahead of time,” she says. “She needed some information about what I was doing and where I lived. I was very surprised, and somewhat confused.” Confusion led to pure joy when May arrived home to a homemade cake and a floral arrangement. “It was so beautiful,” she says. “It was amazing, especially after a long day of frontline work.”

What earned Anja May this very special surprise is her work providing daycare services for parents who are first responders and essential workers on the Island, and who need some help during these unprecedented times. May, who is the director of the Chilmark Preschool, applied to the state to run a program for schoolchildren of all ages. She cares for some of the kids herself, as well as finding placement for others.

May was a natural choice to be one of those to benefit from Simpkins’ Good Karma Cake Program. Since she began the initiative in March, Simpkins has gifted 11 cakes and bouquets to those who have risen to the challenges of the current situation. Her mission is to honor those who, in her words, “have gone above and beyond during this pandemic, or who are just going through something particularly difficult.” Simpkins is involving the community in the program by asking people through Facebook to nominate those they think are deserving.

Once a week, Simpkins bakes a Brooklyn Blackout cake and hand-delivers it, along with a flower arrangement donated by Emily Coulter of Morrice Florist, to a recipient’s front door (practicing social distancing and sanitary practices, of course). Among those to have been gifted so far are Alexandra Pratt, who volunteers with the Houses of Grace Shelter program and is the new director at the West Tisbury library; Sharon Engler, who works for Justice Resource Institute with youth and their families; Island Food Pantry executive director Kayte Morris, and Betty Burton, who founded the Serving Hands Food Distribution program, and is involved in many other charitable initiatives.

Some, like Jane McTeigue, have suffered tragedy. The Vineyard Gazette employee was not able to see her mom before her passing in New York in April because of coronavirus concerns.

The daughter of Lemlem and Phillip McCrary nominated her parents because she wanted someone to check in on them while she was off-Island, unable to visit in consideration of their health. The McCrarys received brownies, since they have certain dietary restrictions.

Simpkins was inspired to show this unique sign of appreciation after she baked herself a birthday cake and then, since she and her husband ate only one slice each, she passed some on to a friend who, in turn, passed the remainder on to another friend. “The cake sort of took on a life of its own,” says Simpkins.

Despite the difficulty of baking and constructing the labor-intensive three-layer blackout cakes, Simpkins chose that particular recipe because of the cake’s origins. Apparently a bakery chain in Brooklyn invented the cake during WWII, when residents in some areas were required to black out their homes to protect the Brooklyn Navy Yard. “To me the cake symbolizes bringing light into a dark period,” says Simpkins.

The Good Karma Cake initiative is an extension of Simpkins’ Cup of Karma Project. For years now she has been honoring important people in her life, as well as in the lives of others, in a variety of ways. Five years ago, the MVY radio DJ and Vineyard Haven library employee launched the project, organizing a series of events where individuals are invited to share stories about people who have influenced or inspired them at some point during their lifetime. The public storytelling events, which include tea and snacks, have been hosted by businesses and institutions both on-Island and off.

“The Cup of Karma Project is based on the concept that we learn from the people in our lives,” says Simpkins, who stresses that we need to rely on one another more than ever before during this challenging time.

Since its inception, Simpkins has extended the Cup of Karma program to include workshops for kids and adults, which she brings to schools, homes, and organizations. The newest Cup of Karma project is a series of podcasts. Each episode features an interview with a person who describes another individual who has inspired and changed his or her life in some way. So far Simpkins has recorded four interviews, and she hopes to air the podcast sometime in the near future.

“I believe every day we start with an empty cup,” writes Simpkins on her website, acupofkarma.com. “All day we decide what we put into our cup. We have the power to choose the people, thoughts, and experiences we allow into our cup.”

Nancy Slonim Aronie, who runs the Chilmark Writing Workshop and was one of those gifted with a cake, says, “Polly is a very evolved, enlightened human being with a wise soul.”

Recently, all of the cake recipients decided to repay Simpkins’ generosity and kindness by surprising her with a virtual party of sorts. The group planned a sneak attack, and showed up at her front lawn with a cake, flowers, cards, and gifts, and serenaded her.

“I was humbled and honored when I came to my front door recently and found all the women I had delivered cakes to, standing in socially distanced formation, singing to me with such joy and celebration!” Simpkins said. “They brought me to tears with their love and kindness, and I will be forever grateful to Nancy Aronie, who organized the gathering, and to these exceptional women for showing up for me despite all they have going on in their own lives.”

For now, Simpkins is no longer accepting nominations for the Good Karma Cake Project, but she plans to continue bringing cakes, flowers, gratitude, and love to Islanders throughout the current crisis.