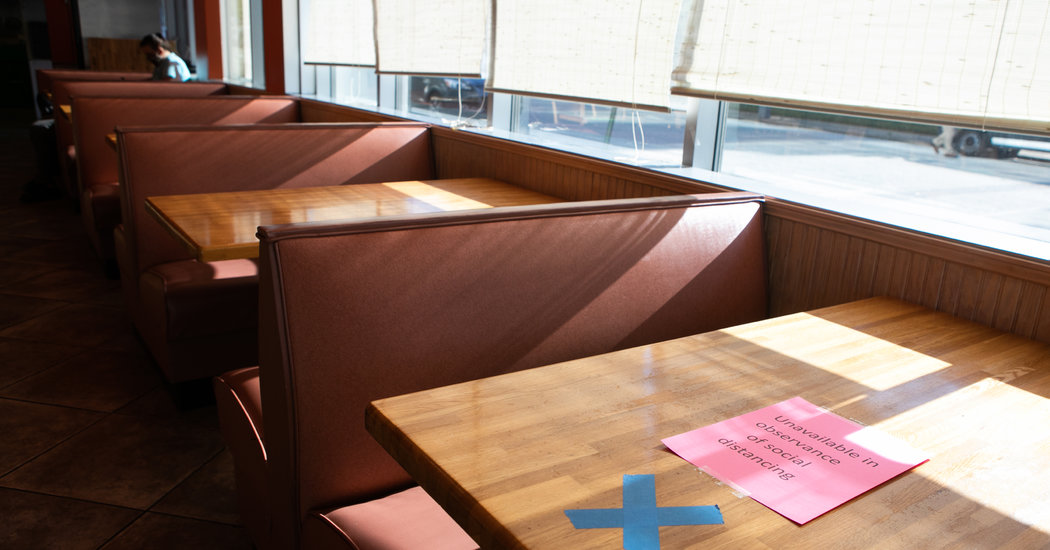 MISSOULA, Mont. — We were in our driveway, car keys in hand, 10 minutes before our reservation time, when I chickened out.

I was supposed to dine at a restaurant in the middle of a pandemic — for the purpose of journalism, of course. Montana, where I live, is opening up. I already had the lead of the column written: On Tuesday evening I rolled the dice and ate a meal inside a restaurant for the first time in roughly 12 weeks. I went not because I really wanted to, but because I wanted to know what it would feel like to attempt to “return to normal” in a world where things are decidedly not normal.

My partner and I never got in the car. Instead, we stood by our front porch and debated. Six new cases had just been announced an hour earlier in the county 30 minutes down the road — an unusual spike. Are we overreacting? But one of the six cases is already in the hospital — does that matter? Is this worth it? The looks on our faces were tortured, a good sign we should pause. We retreated back to the couch where we’ve spent most evenings since early March.

I was hesitant from the start. Nothing about sitting in an enclosed public space for an extended period and eating food made on surfaces I haven’t personally scoured seemed like fun. Nor did it seem sensible. For the past two months I’ve spent big chunks of my day doomscrolling through bad news and preprint studies about mask effectiveness and virus transmission.

If you’re going to eat at a restaurant in America in May 2020, you probably couldn’t pick a better state than Montana. Since late April, the state has reported multiple days of zero new cases, with reasonably widespread testing. My county hasn’t had a new official case in weeks and there are currently zero active cases. While infections are still trending up in many other states that are easing restrictions, the virus appears suppressed enough here to make a genuine case for a phased reopening of businesses.

I support phased reopening. Yet a lack of federal guidance leaves even residents of states that are trying to reopen responsibly with difficult choices. Is going out to eat helping my local economy or putting myself and service workers at unnecessary risk? If we’re reopening, do I still need to isolate for a certain time before I show up at a restaurant? Do I need to get a test before dining out? If I do get tested, am I depriving someone who is more deserving?

After I hit “confirm” on my online reservation I started asking myself even more of these questions, all of them portending awkwardness. Should I wear a mask? I wear a mask whenever I’m in public — it feels reckless not to. OK, so I wear the mask. But I’ll be … eating? Am I supposed to put it on and take it off in between bites and sips? Is that idiotic? Or is it simply being respectful of the restaurant staff? Or is my mere presence as a patron idiotic and reckless? Dining out — a relaxing treat!

I emailed the restaurant before the reservation about its mask policy. I was hoping for some strict guidance but the owners had none, leaving it to staff and patrons to decide individually. They were gracious and lovely, but also unwilling to set that policy themselves. They’re trying to walk a fine line in the hope of making everyone comfortable.

And when it comes to dining out, it seems few people are. A Slate poll of 6,000 Americans showed 73 percent of respondents were not ready to eat indoors at a restaurant even with reduced seating. Even though the lockdown protests are supported by President Trump, that uncertainty seems to transcend party lines — just half of Republicans said they were comfortable eating indoors. Even in Georgia, which is reopening with enthusiasm, the number of diners on Saturday was down by about 84 percent compared with the same day one year ago.

In Montana, restaurants have to comply with phased reopening guidelines — reservations only, 50 percent capacity, tables six feet apart, no bar seating, no cash. But other procedures (temperature checks, masks) are not required, which means the choice is passed down, until it ends up with the consumer.

For many Americans, this personal calculus is a treasured freedom. For me, the uncertainty is crippling. And I suspect I’m not alone in feeling less confident in my ability to assess risk than ever before. It’s not just my family’s health I may be endangering. What if my little reporting experiment made me an asymptomatic carrier and I unwittingly spread the virus to essential workers at the grocery store later in the week?

We’re understandably fatigued by quarantine. For the past week, my Instagram feed has been full of local establishments celebrating their reopenings. I felt myself judging those who’d show up while also judging myself — with no new cases in my town, was I really doing the right thing staying at home?

Standing in the driveway, I realized that the meal would not be a respite from daily life, but a reminder of its many anxieties. So we fired up some leftovers. I relaxed a little. I felt a deep gratitude and even some pride in realizing that, over the past few months, we’ve managed to recreate some of the little comforts we used to seek out in public in our little quarantine life.

The science fiction writer Philip José Farmer once summed up purgatory as “hell with hope,” an apt descriptor for the current moment. It’s what makes the reopening here in Montana so bittersweet. For the first time in a while, a hopeful future feels possible. But right now, at least for me, it’s still just out of reach.

The Times is committed to publishing a diversity of letters to the editor. We’d like to hear what you think about this or any of our articles. Here are some tips. And here’s our email:[email protected].

Eating in steel plates: Twitteratis debate over its benefits – Times of India