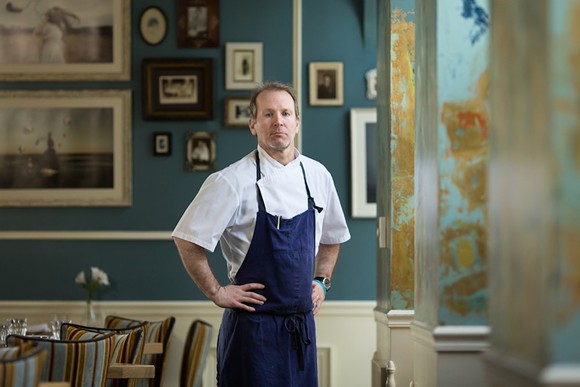 Since opening in the summer of 2016, Dovecote Brasserie has arguably been the anchor of downtown Orlando’s restaurant scene thanks to chef/founder Clay Miller’s exquisite “French-inspired” dishes.

Now, less than four years later, Miller is leaving the restaurant he established to join his good friends and confidantes James and Julie Petrakis at the Ravenous Pig.

Miller couldn’t get into specifics as to why he’s leaving, or offer details on his ownership stake in Dovecote, saying only that “it was the right time to make a change.”

The irony here, of course, is that when Dovecote opened, the Petrakises were minority partners in the venture. In fact the whole idea for Dovecote was borne from a conversation Miller had with James Petrakis. It should be noted that the Petrakises no longer own a stake in Dovecote.

Miller will assume the role of executive chef at Ravenous Pig on June 1.

“James and I are thrilled to welcome Clay,” said Julie Petrakis. “We have a long-standing relationship and respect for his talent and drive and know he’ll be an integral part of the rebirth of the restaurant.”

But don’t expect Miller to go in guns a-blazing.

“I’m just going to try and learn all the cooks’ names,” Miller jokes, but says he’ll work with the Petrakises on putting his fingerprint on the menu over the next month or two.

Miller has worked with some legendary names in the business – Daniel Boulud, Thomas Keller, the late Floyd Cardoz and Norman Van Aken. He was also named one of Food & Wine‘s Best New Chefs of 2010 for his stint at D.C.-area hotspot Trummer’s on Main.

Scott Geisler, Ravenous Pig’s general manager and sommelier, worked briefly alongside Miller at Norman’s in 2003 when Miller was the opening day executive chef, and is stoked to be working with Miller again.

“I know Clay is going to bring some exciting things to the table,” he says. “What makes him such an exceptional chef is the combination of talent and discipline he has in the kitchen.”

No doubt Miller ran a tight ship at Dovecote. In 2016, I named it the Top Table of 2016 for Miller’s scintillating takes on classic, modern, even Colonialist takes on French cuisine. Dovecote also made my list of the 55 Best Restaurants in Orlando in 2018.

Later that same year, Rob Tazioli and Chris Granville came on as investing partners at Dovecote. No word yet on who’ll take over executive chef duties at the brasserie, though Simon Bond and Luljeta Saljanin are currently listed as sous chefs on Dovecote’s website.

Miller fills the opening left by Ravenous Pig chef de cuisine Nick Sierputowski, who stepped down earlier this month to pursue other opportunities.

“I’ve worked with James and Julie for almost 15 years, even before they opened the Pig,” he posted on Instagram. “This place will always be a home for me,” he continues before adding “Don’t worry you’ll find me somewhere close in the future.”

— Our small but mighty team is working tirelessly to bring you news on how coronavirus is affecting Central Florida. Please follow CDC guidelines and Orange County advisories to stay safe, and please support this free publication. Consider making a one-time or monthly donation. Every little bit helps.