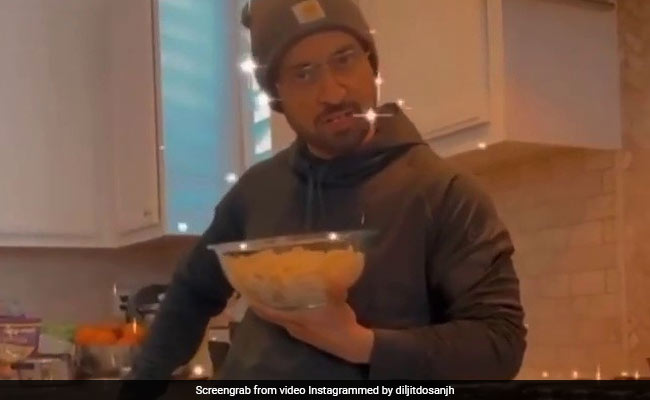 Diljit Dosanjh’s recipe for white sauce pasta has become a hit on Instagram.

Whether you are craving some delicious pasta or simply want to laugh a little this Tuesday, look no further than Diljit Dosanjh’s latest Instagram video. The actor and singer took to Instagram on Sunday to share the recipe for white sauce pasta. In just two days, his video has crossed 1.3 million views on the photo and video sharing platform – thanks, in part, to the hilarious commentary that comes with it.

In the five-minute-long video, Diljit Dosanjh shares a step-by-step guide to making pasta loaded with veggies and white sauce. Peppered with Punjabi music, dramatic sound effects and hilarious jokes, the pasta recipe video has become a hit on Instagram. During the video, while offloading a ton of butter into a pan, Diljit asks his viewers not be afraid of butter as it is “fat free” – in that it comes free with with a lot of fat. He then goes on to use “fat free” cheese in the pasta as well.

The video has collected over 1.3 million views and since being posted, along with more than 6,000 amused comments. Many Instagram users thanked the 36-year-old actor for the entertaining video while others complimented his hilarious running commentary.

Diljit Dosanjh has been entertaining his fans with a number of recipes during the ongoing lockdown. In April, his ‘recipe’ for palak paneer had also amused thousands.