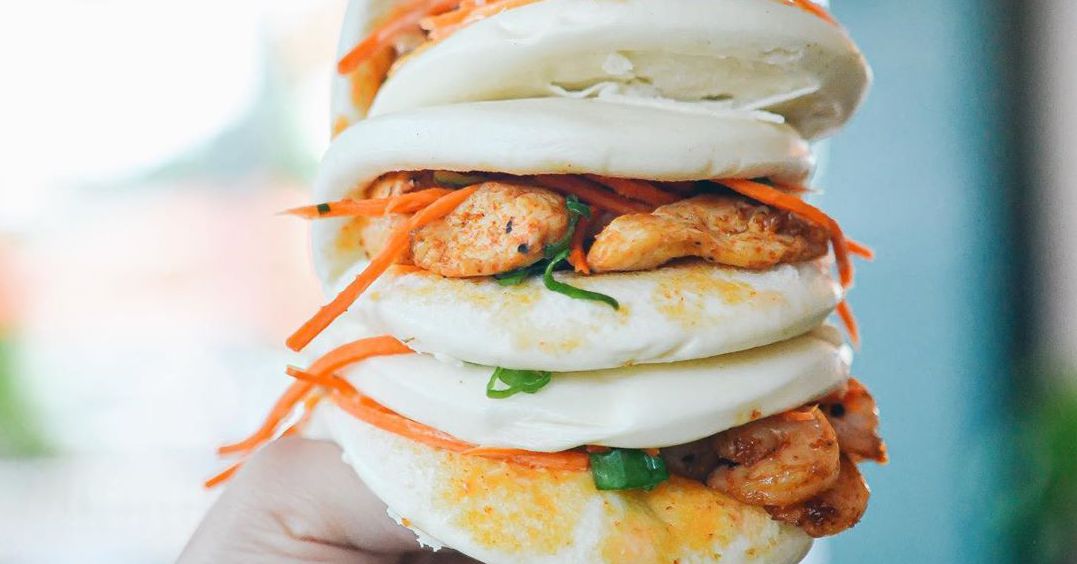 Dallas is home to literally hundreds of restaurants, and even in the midst of a pandemic, new spots are popping up constantly. It’s tough to keep up with every single new eatery that’s debuted in recent weeks, but here are six brand new openings to know about right now, plus more from earlier in June.

This long-awaited Viet-Cajun spot finally opened in Bishop Arts in June after more than a year of anticipation. The restaurant is an offshoot of the pop-ups and crawfish boils that co-owners Dan Bui and Connie Cheng have been doing across the city, focusing on dishes that fuse together Asian and Cajun classics. The brick and mortar spot, at 233 W. 7th Street, serves up mouthwatering breakfast bahn mis, taro mud pie with chocolate cookie crust, and andouille sausage-styff baos, all available for takeout.

Following its Uptown comeback in February after a seven-year hiatus and a popular May pop-up at the Statler Hotel, Primo’s MX Kitchen and Lounge is finally making its digs at the Statler permanent. Primo’s will open on Monday, July 20, on the first floor of the hotel at 1914 Commerce Street next to Sfereco. The menu will include enchiladas, Primo burritos, crème brûlée churros and other Tex-Mex comfort food for dine-in, take out and delivery through Uber Eats, Grubhub and Seamless.

Innovative pizza joint Zalat is set to open its second Addison location today, July 16. The pizzeria is known for creative takes on pie flavors, like elote, Pho Shizzle, Loaded Nacho and Sriracha. The location, at 4980 Belt Line Road, will operate as an ultra late night “cloud kitchen”, meaning takeout and delivery only, through the restaurant’s website and apps like Grubhub and Uber Eats.

Mexican Sugar is bringing its tequila library and South and Central American cuisine to a second location in Las Colinas, Irving. The restaurant, which was founded in Plano in 2013, will feature more than 100 tequilas and 30 mezcals in a massive 10,793-square-foot dining room that seats 427 people.

The new location, at 3215 Regent Boulevard, is already open for takeout and delivery, and will open for dine-in on July 20.

Newly-reopened XOXO serves up its dishes in a plush, greenery-drenched, Instagram-worthy dining room at 3121 Ross Avenue. The nightspot, which originally opened in March just as the coronavirus shutdown began, boasts modern American cuisine with “flavors from all over the world,” including toasty arancini with truffles and creme fraiche, smoked potato mousse, and tom yum-style lobster shooters with lemongrass and coconut milk. Diners can request a seat in a lush Millennial-pink upholstered booth complete with an on-demand “press for champagne” button.

Uno Mas, which aims to bring a creative spin to Tex Mex, is the latest project from HattenLuke Hospitality group, which also owns neighboring Henderson Avenue restaurant Smithy and Downtown cocktail bar The Woolworth. The new spot, at 2929 North Henderson Avenue, opened in mid-March before having to shut down due to coronavirus. It’s now open again, dishing out interesting flavor combos, like pineapple-avocado guacamole and cauliflower fajitas, plus a cocktail menu inspired by the mountains and beaches of Mexico.

This new Dallas bar hopes to bring putt putt into the 21st century by featuring the game in an industrial warehouse alongside a bar serving up craft cocktails and bites from Cooper’s Meat Market. Another Round Mini Golf opened June 19 at 660 Fort Worth Avenue in West Dallas, and includes 12 holes in an indoor, art-filled space meant to evoke an Oak Cliff country club. In addition to sliders and charcuterie from Cooper’s, the bar serves golf-themed cocktails like the Caddie, a mix of blanco tequila, passionfruit, habanero puree, cilantro, and lime; and the Tee Off, which pairs vodka with mint, Aperol, lime, and ginger beer. During the pandemic, Another Round is offering private tee-times for $150 for up to 14 people. An annual membership is $300.

This new restaurant near Highland Park aims to be a refuge during hard times, owners tell the Dallas Morning News. Trova, at 4004 Villanova Street in The Plaza At Preston Center, is the longtime dream of Michelle Bonds, who has brought on Level 2 sommelier Cameron Cronin to curate the wine list and manage the house. (Cronin as the former sommelier at Highland Park restaurants Sachet and Homewood.) The eatery will be both retail shop and bar, selling and serving charcuterie, cheese plates, coffee and small bites. It is scheduled to open on July 16.

Tri Tip Grill, known for serving up California-style barbecue, has opened its second DFW-area location in Richardson. The chain first opened in Frisco, and has two previous locations in New York, CultureMap reports. The restaurant, at 1417 E Renner Road in the CityLine Center, will feature counter service during the day and full-service dinners. In addition to its namesake sirloin steak, which is aged for 35 days, the menu also features chopped salads and Southern-style desserts like banana pudding.

Meatball restaurants are popping up all over Dallas, and the newest one, Sfereco, opens in The Statler Hotel today. Sfereco, which means “spherical” in Italian, is the work of executive chef Ryan Carbery of Nosh Bistro and Farmbyrd Rotisserie, and Refined Hospitality Concept’s Robert Hall. In addition to a variety of build-your-own meatball bowls, the restaurant will serve other Italian-American comfort foods, including a chicken parmesan sub, pizzas with the option of gluten-free cauliflower crust, and eggplant parmesan bites with melted mozzarella and fresh basil.

A new spot in North Dallas hopes to foster community through its meals with sharing plates intended to create connection at the table. Seven Doors Kitchen & Cocktails, at 5774 Grandscape Boulevard in The Colony, operates from the motto of “Serve great food with love and gratitude,” dishing out modern cuisine with an emphasis on seafood dishes such as a fried clam po-boy with juicy tomatoes and Creole remoulade, pan-seared ruby trout with brown butter and roasted butternut squash, and caviar chips, house-made crispy potato chips topped with crème fraîche and imported caviar.

Taiwanese cuisine is the focus of a new spot in Frisco recently opened by a young chef named Ian Peng. Peng, who is just 22, launched Kitchen Master Bistro at 9285 Preston Road for takeout and delivery a few weeks ago and plans to extend to dine-in service on June 16. The menu features soups such as puff vermicelli topped with brained tofu; tan tan mein noodles covered in Szechuan chili sesame oil and crispy friend shallots; house-made dumplings, stir fry and more. Peng, who moved from Taiwan to the US when he was around eight years old, told the Dallas Morning News that his first kitchen job was washing dishes at a restaurant as a teenager. He quickly moved up the ranks, ans was promoted to sushi chef before even graduating high school.

The second location of beloved Vietnamese joint Mot Hai Ba opened this week in Victory Park for limited reservations only. The new spot, at 665 High Market Street, is much larger than its tiny older sibling in Lakewood and will feature a chef’s table in the kitchen where diners can sample tasting menus from chef Peja Krstic.

A new destination for Korean-style street food has quietly popped up in Carrollton. Korean Street Eats, 2625 Old Denton Road, Suite 812, is focused on the grab-and-go snacks popular on the streets of Seoul and Busan, such as kimpap, nori-wrapped rice rolls; saucy skewered fish cakes and toasted sandwiches.

A new Nashville-style fried chicken joint has opened on Greenville Avenue. Chirps Chicken, at at 3619 Greenville, brings spicy fried chicken and a full bar to the spot formerly occupied by LG Taps, reports CultureMap. Chirps serves chicken tenders in a variety of spice levels, from “country” to “Nashville” to “fire”. The restaurant also offers sides like mac and cheese and waffle fries to help cut the heat.

According to the Dallas Morning News, Invasion initially opened just before the coronavirus caused them to shut down temporarily. Heidelberg and his business partner Agon Raka used that downtime and the ingredients they’d already ordered to make meals for unhoused people in downtown Dallas instead. Now that they’ve reopened, meal donation remains an important part of their business philosophy. They’ve partnered with organizations like Behind Every Door and Human Impact to donate hundreds of meals each week.

Bishop Arts has a new Tex-Mex-flavored sports bar. Blue Cenote, at 312 West Davis Street, boasts more than 6,000 square feet of space — plenty of room to social distance — complete with 20 TVs and a menu rich with pub food and Tex-Mex bites, according to the Dallas Observer. Starters include house-made salsa, loaded fries topped with carnitas, and creamy, lemony elote. There are also tacos, burritos and a “Cenote Burger” with grilled serrano chiles.