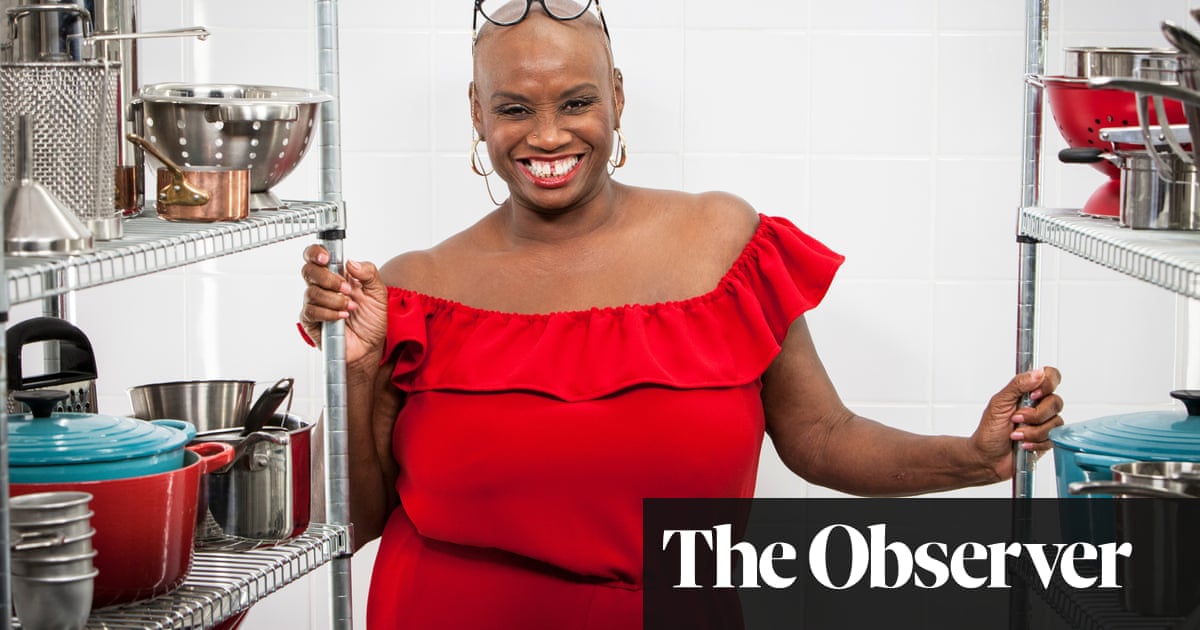 I remember standing on the stool next to Mum and making white sauce for a cauliflower cheese for the Sunday meal when I was five or six. Around that time we moved from England to Cyprus and it was sunny and lovely there. School finished at midday in the summer and I made friends easily and it was an easy transition for me. It was much more of an eating-out culture than it had been in England and I remember an octopus being pulled out of the sea, killed on the rocks and me eating it, all charred, barbecued and with that lemony deliciousness. “Wow, that’s what they do,” I thought. It was a moment of ignition in my consciousness – being transfixed by the flow of life and death and poetry and beauty.

I used to meet Mum from her work in an office on the air force base and on the corner there was a wagon selling loukaniko [Greek sausage] in fresh bread with melted halloumi. The texture was just perfect. Hot, salty, with loads of paprika in it. We’d picnic on the beach a lot, watching the fishermen come in. I still really love picnics on the beach, but who doesn’t?

It’s said that my grandmother on my mother’s side used to dance naked on a beach. She had 12 children. And she instilled a fire in all their bellies and in mine – a determination to push through any problem and to meet your goal.

When I was told “We’re going home,” I thought: “What do you mean? This is home.” But home became an air base in Suffolk. It was grey, cold, miserable, the 1970s and a very racist environment – that’s just a fact – I hated every minute. We went for doner kebab and it was just awful, bastardised, so different. It was like being dumped in some level of Hades. Luckily, I made two friends – Sue and Louise, who are still very good friends nowadays – because otherwise I don’t know how I would have got through it.

I was the only black girl for miles. People whispered strange things behind my back and called me terrible names. My boobs grew big early and I was sexualised and didn’t understand what was going on. Just for instance, I babysat for a neighbour who tried to put his tongue down my throat. Sometimes I wonder why I didn’t tell my mother about my pain. I went through a lot, but I survived and it helped make me who I am nowadays and I like the way I am.

Dad was a flamboyant cook. He’d come down to Brixton market or Ridley Road market in London and do massive food shops; buying half a sheep and getting it cut down. He would buy sacks of black-eye peas, still slightly wet, and I’d de-pod them. I hated it then, but now I think it’s quite groovy. He’d make some lovely meals; then we would spend the rest of the day cleaning up the mess.

Dad was a real bon vivant, a great host. One of my earliest and most comforting memories was going to sleep with the sound of happy people having a party in the next room, of them cracking up and the ice-cubes going in the glasses.

I’d left home by 17, come to London and met Neneh Cherry. We became best friends and started cooking a lot. We’d hold huge parties – once we bought 100 mackerel and boned, filleted, cured and roasted them for 100 people. What a funny pair of teenagers we were. I think we were trying to create home, to root everybody, to create security and continuity, somewhere where people could be good, safe and kind.

I’d seen the Slits in Bury St Edmunds and they inspired me and became a huge part of my life, not least in the kitchen and with Tessa [Pollitt, the bass player] becoming my brother’s partner. Tessa has the sweetest hand in the world for making mashed potato. Ari was the sort of person who you wanted to look after and feed, but she lived with a dread Rasta boyfriend and made excellent fried snapper.

My brother loved a Fray Bentos pie and once put one on the cooker when he was drunk and woke up with it all over the ceiling.

Neneh and I just cooked and cooked after my brother died from sickle cell anaemia [when he was 26]. Trays and trays of chickens to last each week, because we didn’t know how else to fill up this big existential gap. And I kept worrying about things – like that there wasn’t enough gravy around, so cooked vats and vats of it, just adding things for days to the giant stockpot. I think I spiralled for years after he died. When people are in trauma they need the love of food.

When I was in Vagina Monologues we ate at the Ivy opposite, and I really got into it. Before then, when I was in [the band] Rip Rig and Panic, in the time of lavish expense accounts, I was taken to really fancy restaurants, for the first time. The Apollo in Paris was old fashioned with gorgeous frescos and waiters carrying massive silver platters across the room. I got served oysters and to this day I eat oysters like I did then – with a bit of vinegar, a dash of tabasco, a few drops of champagne and you knock that back and it’s the most delicious thing in the world. It horrifies the purists but I don’t care.

Top of my list of restaurants to go to, when possible, is the Grey in downtown Savannah in Georgia, run by the amazing Mashama Bailey. She’s taken American soul food and elevated it with an elegant, beautiful delivery which echoes old ways of doing things. I really like tradition and innovation hand-in-hand.

I dream about recipes and cooking. Or that I’m in a mad service at a restaurant and things are broken. When my partner and I were running a pub, seven days a week for two and a half years, I had nightmares about getting food wrong. But then I’d wake up and realise: “I’m fine. No one’s waiting to be served.”

Drink
At the moment, strong delicious frozen pina colada, like an ice-cream, but not. At a Caribbean pop-up in a friend’s pub garden in Clacton I recently realised I was having three of them a day while working, so I had to put myself on a ration.

Place to eat
I’ve got quite a few. But if there’s one place over the years, it’s probably aunt Gwen’s house in Guyana. She’s Antiguan-Guyanese and the Guyanese are the best cooks in the Caribbean. She’s very ill at the moment, but I daydream about her rotis. There’s a phrase in Guyana, when someone really likes your cooking – “Your hand is sweet”. Her hand is very sweet.

Signature dish
There’s a honey-baked chicken dish I’ve done for 45 years at least. Our kids crave it, whether happy or sad. On our restaurant menu it was transformed into “Orange and ginger wadadli fried chicken”. There’s also my chocolate curried goat, which took 25 years to perfect.
Andi Oliver’s Wadadli Kitchen wadadlikitchen.com