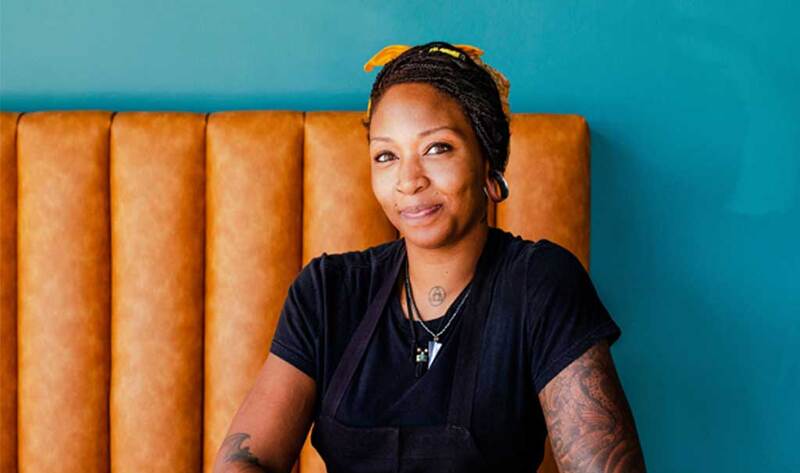 Patrons of Counterpart—a local eatery in Echo Park, CA—probably don’t consider the person who created their vegan breakfast burrito. As they order their favorite Sunday morning meal, they’re likely oblivious to the fact that it was lovingly folded and grilled by the hands of an executive chef who has worked in kitchens across America. But they should know. Chef Mimi Williams reincarnated the daytime hot spot when she joined the team in October 2019, and after watching her veganize sunny-side-up eggs and marbled pastrami, we knew we had to get her story.

From nursing to culinary school
Williams began cooking from the Betty Crocker Cookbook at the age of six. She describes the food she grew up with as “eclectic” and vegetable-forward with ample amounts of Creole seasoning thrown in. Like most, she put aside her passion for cooking to pursue a degree in nursing, but after a while, she decided to trade in her scrubs for a chef’s coat. Williams elaborated, “I have always ‘thought in food.’ I can walk through the aisle of the grocery store and find ingredients I have never used and just know what to do with them. Giving up nursing allowed me to explore science and my love of biology and taking care of people. Once I made up my mind about taking the plunge and following my dreams of becoming a chef, I went for it.”

Williams attended a four-year chef apprenticeship program at Johnson County Community College—one of the most prestigious culinary schools in the country. There, she learned classical techniques and sharpened her skills to become a contender in one of the toughest, male-dominated industries out there: food.

Acting tough
“Being the only girl out of seven brothers, I was used to the male-dominated atmosphere and prided myself in being able to let a lot of that macho attitude roll off my back,” Williams explained. “I held my head high, held my tongue, and watched. I started timing myself and asserting myself fully into my position. It wasn’t long before I started managing those who treated me like I didn’t belong.”

Williams’ resolute attitude was also heavily influenced by her father, who sadly passed away before she became a chef. “[My father’s] rebellious nature was what pushed me and made me fearless in such a turbulent industry. He gave me that confidence and that edge that you need to be a chef,” she recalled.

Becoming a vegan chef
Williams didn’t choose the vegan diet—her daughter made her do it. While pregnant, Williams found she could no longer consume animals, and that thought process quickly led her down the plant-based path. When she realized she could adjust the recipes she loved to suit her new lifestyle, she thought, “challenged accepted.” Her first dish was malai kofta—dumplings stewed in a creamy rich sauce with cheese, golden raisins, and nuts (yum).

Post-maternity leave, Williams re-entered the restaurant world as a vegan chef. Having mastered the art and science behind homemade vegan cheese and runny eggs, she found her place at Counterpart and revolutionized the menu.

What’s on the menu
The first thing Williams did at Counterpart was to implement “more seasonal, approachable, and exciting dishes” to the restaurant’s offerings. A few of these items included carrot lox and a Tunisian Frittata—the latter of which Williams says is a must-order for first-time customers. While complex in flavor and textures, her style leans toward minimalism. “I am drawn to foods that have simple yet stunning ingredients. I don’t want to eat a dish with 30 ingredients. I like the flavors to be clean and identifiable,” she affirmed.

Her food has even made “repeat offenders” of meat-eating customers. The Smashburger, tofu scramble, and breakfast burrito all speak to the self-proclaimed carnivores.

In pursuit of higher education
Williams remains a science enthusiast at heart, and she plans on further welding her two passions by earning a bachelor’s degree in food science. The ultimate goal is to become a research chef—not one confined to a lab, but one who can truly give back. “I want to learn how to make food more accessible to everyone who isn’t able to afford organic produce. I want us to learn how to cultivate land that can grow bountiful so that we continue to put back what we take.”

We hope she is able to continue her career at Counterpart during her studies. That breakfast burrito is too good to be 86’d.

They used to sell to Per Se and Le Gavroche. Now these wholesalers are supplying home kitchens – CNN

A new way of business for local bakery – WNYT