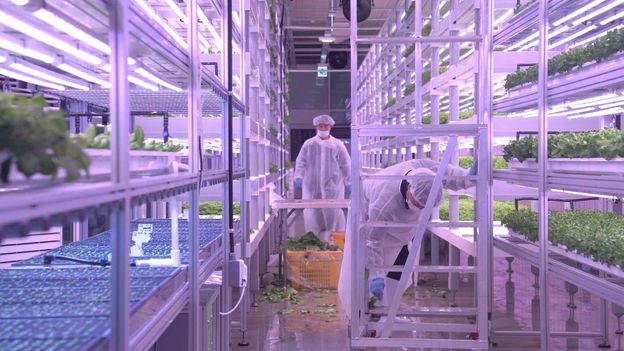 More than seven million passengers ride Seoul’s metro system every day. But since September 2019, those who descend underground at the city’s Sangdo Station and push through the ticket gate are met with an unusual site: behind a glass-panelled facade, leafy shoots, sprouts and microgreens have sprung up from under bright LED lights as part of a subterranean, organic farm.

The concept, known as Metro Farm, uses hydroponic growing trays and an automated tech network to control the underground ecosystem’s temperature, humidity and CO2 levels. The result is a highly productive “vertical” farm that produces some 30kg of vegetables per day at a rate that is 40 times more efficient than traditional farming. In the adjacent cafe, as many as 1,000 customers a day now purchase salads, smoothies and edible flowers grown next door in a full seed-to-table operation.

According to Farm8, the tech startup behind the underground venture, Sangdo Station is just the first of many sustainable urban farming ventures that the company hopes to introduce across South Korea. The company believes that by developing these high-tech ventures in high-density areas, consumers will spend less on food transportation costs, C02 emissions associated with food delivery will drop and people will have a sustainable, year-round alternative to crops increasingly affected by pollution and climate change.

Farm8 is hoping to expand its flagship farm to three more Seoul metro stations later this year. If successful, the innovative venture may not only offer a more sustainable solution to urban farming, but also has the potential to be rolled out in environments where traditional farming isn’t feasible, such as deserts and Arctic climates.

This video is part of BBC Reel’s Sustainable Future playlist.

‘We’d go bust in months’: restaurants at a loss over social distancing dilemma – The Guardian