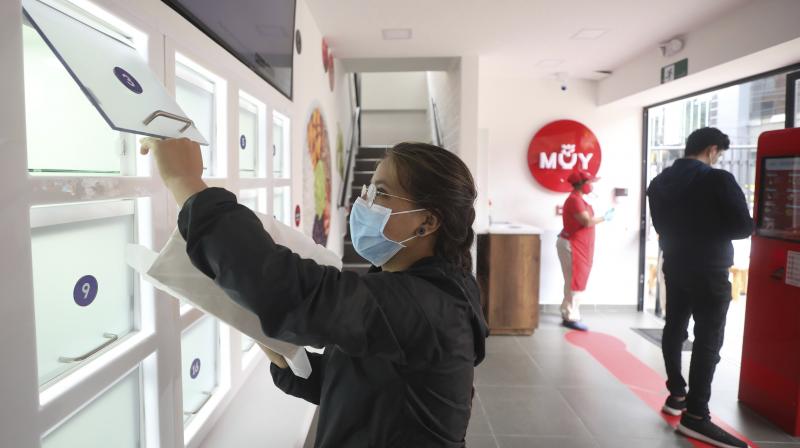 Bogota: A Colombian fast food chain is planning to turn its branches into automated restaurants at a moment when the coronavirus pandemic has slammed the food service industry worldwide.

MUY has more than 30 restaurants in Bogota, and four in Mexico City. Earlier this month, it opened its first “contactless store” in a commercial district of Bogota, where many restaurants have been forced to shut down because of a ban on sit-down dining.

The automat’s main lobby is lined with colorful touch screens on which customers order their food. Another screen tells people when their order is ready and directs them to small cubicles where they can pick up their hot meals in bags. Machines take payments in cash or credit cards.

“It’s very practical” said Felipe Sanchez a publicist who said he has been visiting the restaurant twice a week. “I think they have continued to guarantee the quality of the food while implementing new safety measures.”

MUY serves freshly cooked rice bowls that include proteins like grilled chicken and strewn beef, as well as vegetables and Colombian favorites like plantains, red beans, chorizo and pork rinds.

The company has used the touch screens since it was founded in 2018 and says that it planned to transition to contactless stores even if the pandemic hadn’t broken out.

“The technology helps us to make our service faster and also to make it more personalised” said the company’s CEO, Jose Guillermo Calderon. He explained that the computers gather data on what customers order so that the next time they visit, their favorite meals show up on the screens.

The machines also track how much of each ingredient is being requested, helping the company to avoid purchasing more than it needs.

“A traditional restaurant can throw away up to 30% of its food” Calderon said. “We have cut that down to 2.7% which is still a lot, but less than the rest of the industry.”

Automated restaurants date back to the late 19th and early 20th centuries, when entrepreneurs in Germany and the Unites States built eateries known as automats that sold meals in large vending machines that took coins. Those in the US began to shut down in the 1980s.

But some remain in the Netherlands and a restaurant with a similar contact-free system opened in the Argentine capital of Buenos Aires in 2018.

New attempts to launch automated restaurants based around touch screens in the U.S. have had limited success. Spyce, a Boston eatery where robots cooked meals shut down in November to make changes to its menu and has not reopened. Eatsa, which launched in San Francisco in 2015, closed its branches last year, changed its name and now focuses on developing software.

MUY is trying to adapt to the pandemic by making it easy for customers to order food from home through an app. It’s also keeping costs low by hiring humans to do its cooking and not investing in robots. Calderon said that the chain is selling about $1 million per month at its more than 30 locations, with sales already recovering to pre-pandemic levels. The price of dishes starts at about $2.20.

“Its very affordable” said Dayana Briceno a beautician who visits on her lunch break. “And it allows me to get back to work quickly.”

MUY is also hoping to portray itself as a bio-secure location. An employee at the entrance greets customers with santising gel and touchscreens are disinfected at regular intervals.

The case for a restaurant bailout – Vox.com