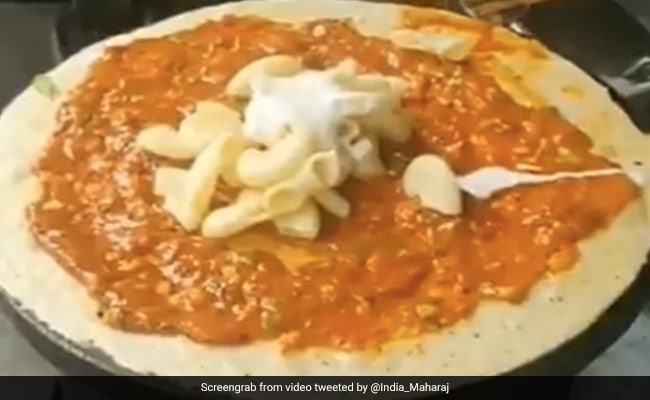 Red sauce pasta dosa? What do you think of this dish.

Fusion food may be appealing to some people, but many people dislike the thought of mixing two distinct dishes to come up with new. Over the years, we have seen many kitchen experiments go viral on social media. Some have been well received, and others… not so much. This time, it is a viral video of red sauce pasta dosa that has divided opinion on Twitter.

The video, shared by a Twitter user, shows a person cooking an Italian classic on top of a dosa. In the 57-second clip, the person is first seen pouring dosa batter on a flat skillet and then proceeding to make red sauce on top of it. After making the red sauce, the chef spreads pasta and grates cheese on top of the dosa to complete his culinary creation.

Watch the video below:

Since being shared on Twitter two days ago, the video has collected over 2 lakh views and more than 900 ‘retweets’ and comments.

“That should be a crime. Couldn’t make it through the whole video. I bet he added pineapples to that abomination,” wrote one enraged Twitter user in the comments section, while another called it a “sacrilege”.

“How to unsee this?” one person asked.

Some, however, did not seem as put off by the red sauce pasta dosa as others.

“Looks tasty,” said one commenter, while another remarked: “Big deal! I have had dosa with schezwan sauce, ketchup, cheese, sandwich spread, leftover bhaji including paneer tikka.”

This is not the first time that an unconventional recipe has faced the heat from social media. Earlier, a video of Maggi cooked in milk had infuriated many.