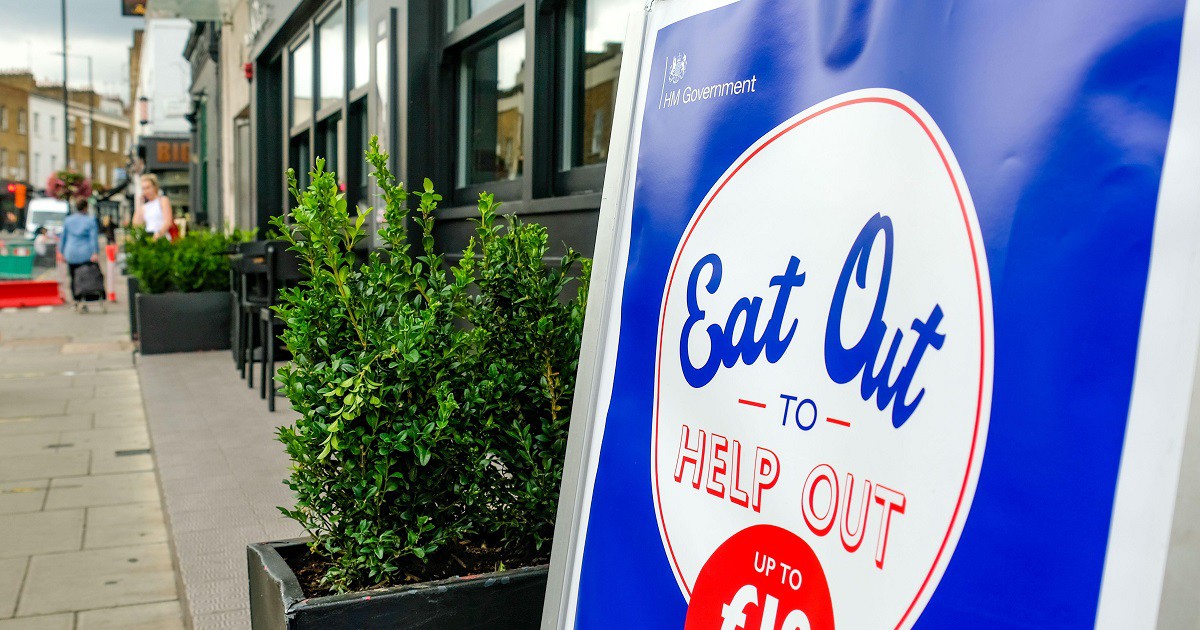 A widely shared post on Facebook claims that 64 million people took part in the government’s ‘Eat Out to Help Out’ scheme and, despite sitting in restaurants without facemasks, none of these people died. This is incorrect.

The ‘Eat Out to Help Out’ scheme involved participating restaurants deducting up to 50% from food bills, up to £10 per person, on Mondays to Wednesdays throughout August and across the UK. There were no limits to how many times a person could take part in the scheme and so, although there are figures for how many meals were served, there is no way to know exactly how many individual people this equates to.

The scheme finished on 31 August, and the Treasury reported that more than 100 million meals were eaten by diners as part of the scheme. We do not know how many people this equates to. For example, if everyone who took part in the scheme ate out three times then the actual number of participants would be considerably lower, at 33 million.

The total population of the UK is around 67 million people, including both adults and children, so 64 million people would suggest that virtually everyone in the country had taken part in the scheme.

Polling data from YouGov a few days before the scheme ended suggested that just under half of British adults had taken part in the scheme, which is a lot lower.

The figure of 64 million cited by the Facebook post probably comes from an earlier Treasury announcement on 25 August, which said 64 million meals had been served as the scheme entered its fourth week. The post is wrong to equate this to people.

It’s likely the post is correct to say that the people who did take part in the scheme would have sat in a restaurant without a face covering to eat. As of 31 August, when the scheme ended, face masks were not a requirement in most restaurants, bars and pubs. The government said businesses who participated in the scheme were preparing to become Covid-secure, for example by installing protective screens, contactless payments, social distancing, one-way walking systems or having reduced capacity.

The rules on face masks have now changed though. You do not need to wear a face covering when seated to eat or drink in a hospitality premise such as a restaurant, pub, cafe or bar. From 24 September, you must put one back on once you finish eating or drinking

There is no evidence to back up the claim that all of the people who took part in ‘Eat Out to Help Out’ have survived the coronavirus. Between 3 August, when the scheme launched, and 22 September, the most recent data available, government figures say there have been 589 coronavirus deaths (although the real number maybe higher, as this only includes people who received a positive test for Covid-19 and died within 28 days of their first positive test).

It’s impossible to say, based on the available information, whether any of these people had taken part in the ‘Eat Out to Help Out’ scheme. More broadly, it has been suggested that the scheme may have contributed to the recent rise in cases and hospitalisations, although this remains speculative and uncertain.

This article is part of our work fact checking potentially false pictures, videos and stories on Facebook. You can read more about this—and find out how to report Facebook content—here.

For the purposes of that scheme, we’ve rated this claim as false
because there is no evidence that 64 million people took part in ‘Eat Out to Help Out’ or that none of these later died.

Secrets to Decorating a Delicious Cake With a Piece of Cake Bakery in Lafayette – News15 | Lafayette, LA – FOX 15

Pineapple takes cake to the next level – The Hillsdale Daily News

Don’t turn your nose up at the TikTok feta pasta, it’s gone viral for a reason – CNET