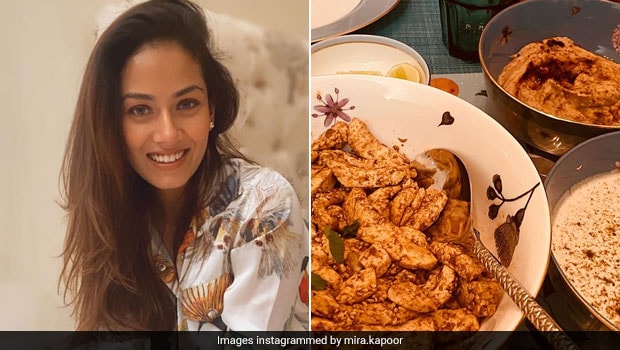 HighlightsMira Kapoor married actor Shahid Kapoor in the year 2015Mira Kapoor is a vegetarianMira can cook up a storm herselfMira Kapoor is making quite some ripples on her Instagram handle with her cooking chops. If you follow her, you would know the Ms. Kapoor is a hardcore foodie, loves to experiment with new recipes and try out different cuisines too. Mommy Mira often takes her children’s help too to whip up something exciting. Remember the time her kids plucked some fresh phalli from their backyard and Mira cooked them in a delish stir-fry? On Thursday evening, she unleashed her foodie side yet again, and if you are a fan of shawarmas and Middle Eastern fare in general, you may want to take down some notes.For the unversed, shawarma is a Lebanese wrap made with pita bread, filled with meat and all kinds of veggies and sauces. The snacks are a hit in India too, and the one that Mira made for her family were made of whole-wheat pita, she wrote in her caption.(Also Read: Is This Mira Kapoor’s Power Drink For Detox And Immunity? Take A Look)”Paneer Filling with a homemade spice rub, Smokey hummus and a yummy garlic yoghurt sauce and a salad wrapped up in the humble whole wheat roti”, she wrote about the filling.
She also prepared a hearty green salad with homegrown mint, olives and dried cranberries from Kashmir.Next, she wrote about the hot sauce she tried her hands at a hot sauce which “wasn’t quite fiery enough” for her.In her note, she also mentioned about a falafel place in Select City Walk in Saket, where she and her sisters would go after their spin class. Looks like her penchant for Middle Eastern food is not new.(Also Read: Misha And Zain Kapoor Help Mommy Mira Kapoor Make This Healthy Lunch)

What Cake Baking Can Teach Us About Vaccine Production – NPR

Unlock Phase I in Rajasthan: Hotels, Restaurant, Clubs And Shopping Malls to Reopen From Monday | Details Her – India.com