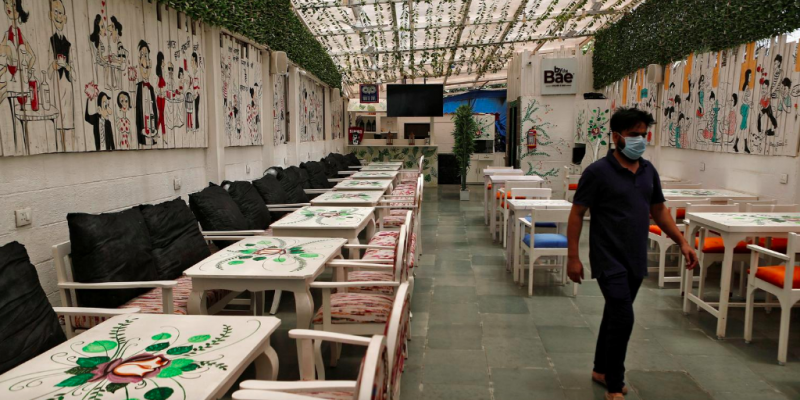 On September 1, Goa allowed its restaurants and bars to open for dine-in customers after a five-month-long ban. Tables, however, despite rules for social distancing in place, remain largely empty as the state witnesses a steep spike in coronavirus infections.

Margarida Távora e Costa runs Goa’s most famous restaurant, Fernando’s Nostalgia in Raia, Salcette. Despite warnings from well-wishers to put off opening even though the ban has been lifted – due to the rising numbers of COVID-19 cases – she says she felt compelled to open the restaurant, because Nostalgia’s dedicated staff of 20 years have families to feed.

But business is nowhere near as usual. “Customers are just 25-30% of pre-COVID levels, though we have complied with the SOPS for hygiene and social distancing. But at least something is better than nothing. I don’t think we will reach pre-COVID levels of business this year,” says Margarida.

On September 1, Goa had 588 new infections and a cumulative 18,006 coronavirus cases. By September 24, it had a cumulative 30,552 cases —  a 70% increase in three weeks, with an average of 522 new cases a day. The numbers may seem low compared to other states, but Goa is India’s smallest state with an estimated population of just 18 lakh. Nearly 2% of the population has now contracted the virus.

Goa also has the highest number of cases per million population than any other state. Yet Goa is rolling out the red carpet to visitors as it’s tourism-led economy has all but collapsed due to the pandemic. After the centre’s Unlock 4 guidelines, there is no more health vetting of tourists entering Goa.

“Right now, mostly tourists and some non-Goans settled here are coming to the restaurant, but not Goans. Goans are being extra cautious and also thrifty, spending only on prime necessities, as many have lost jobs, some are getting only 50% of their earlier salaries. Further, entire families are at home so they are not only cooking for themselves, many have also begun small culinary enterprises to make up for the lost income,” says Nostalgia’s Margarida.

Marius Fernandes does not plan to visit a restaurant till 2021. A beloved Goan famous as the state’s ‘festakar’ for the sheer number of traditional festivals he has revived, Marius has spent the entire lockdown on his home island of Divar, a safe place to avoid viruses of all kinds. He visited two popular restaurants in state capital Panjim in the second week of September.

“I had to maintain social-distancing norms so the restaurants were only catering to 50% of the usual customers, hence they were losing revenue. These enforced measures make the situation dismal and terrible for restaurant owners. I also noticed home delivery sales but that won’t be sustainable to run the business and cover their costs. Very few are venturing from their villages into Panjim. I myself ventured out of Divar only after six months because of an emergency, and possibly will not return until the new year,” said Marius.

It’s not just restaurant and bar owners who have been left with their incomes decimated. Omar de Loiola Pereira, one of Goa’s biggest names in music who also plays regular gigs in select restaurants, has had no work for the past six months. “Except for one paid online show in August, I have been out of work exactly six months since the lockdown. Now that restaurants have opened, we have restarted with the only regular gig we do on Sunday afternoons. Nothing else has restarted yet. Most of our bookings have actually been cancelled altogether.”

Many Goans are upset that tourists are being freely allowed to come to Goa while COVID-19 levels are spiking. At the same time, the economy needs to open up given that so many Goans have lost income. But the opening has been accompanied by anger among Goans at tourists ignoring safety norms. There is also anger at both staff and patrons in some restaurants, particularly in North Goa, going maskless. Anumitra Dastidar opened The Edible Archive restaurant in Assagao, Bardez just four months before the nationwide lockdown closed her business. “Yes, we’ve had to politely ask people to wear masks or stay in the outside courtyard of the restaurant,” says Anumitra.

Also read: In Tourist Haven Goa, Tourists and ‘Outsiders’ Are No Longer Welcome

“We do need to restart our decimated economy. And given that tourism is one of its biggest pillars, we need to restart tourism. However, this needs to be managed very carefully and maturely. Decisions that are short-sighted and ill-conceived could cost us dearly,” says Omar. “At the gigs, I’ve seen far less patrons than the normal capacity of the restaurant. But we too won’t go out to restaurants to eat just as yet, because we have elders and children who both fall within the vulnerable age brackets. Though you see some restaurants claiming they follow SOPs, it’s but an eyewash. I have passed by a few restaurants that are too crowded, no distancing, no sanitising between guests leaving a table and new guests sitting at it, staff not wearing masks, closed and badly ventilated places. etc. Our own economic situation does not give us the confidence to indulge in discretionary spending just yet,” adds Omar.

Trying to assuage the fear, on September 20, state health minister Vishwajit Rane inaugurated a ‘Covid store’ at Goa’s Dabolim airport, where passengers can purchase PPE kits, hand sanitisers, masks and gloves. Not that many tourists are racing to visit Goa. Tourism minister Manohar Ajgaonkar admitted that tourism would not pick up in the state till a COVID vaccine has been approved, noting that establishments which have opened are not doing well.

“While it’s important for Goa to have a functional tourist economy, I do think that there should be some measures and rules in place while COVID levels are on the rise, to make it safer for everyone involved, whether tourists or locals. We ourselves feel the need to take precautions while interacting with our customers. It would be much better if the government-mandated procedures like negative tests before travel and staggered hours for shops etc, so that the rate of the spread could be reduced overall, even while reopening,” says Anumitra.

Anumitra, however, sounds more optimistic about future prospects. “Because of the lockdown, we did have to drastically change our menu. This allowed us to embrace the seasonal nature of our food and thoroughly explore local ingredients, so we changed the menu for the monsoon season. We’re aiming to reopen in October for dine-in. We’ve been getting quite a few inquiries about dine-in, as well as delivery and caterings. I would say it is becoming comparable to pre-COVID levels, in the last month.”

Goa is tackling the same precarious balancing act that the whole world is facing. Open up for much needed economic activity, while keeping people safe from infection. So far, Goa’s is teetering on its balancing act.

Lesley A. Esteves is a journalist and editor based in Goa.