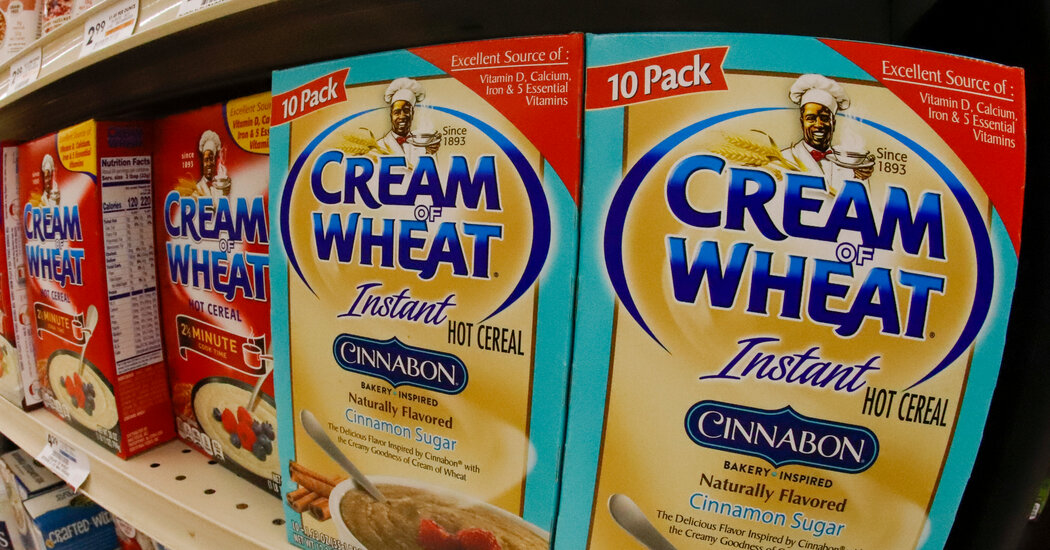 The Black chef will no longer appear on Cream of Wheat packaging where he was the face of the brand for more than a century, the product’s parent company announced in a decision that comes three months after it vowed to re-evaluate its marketing to ensure it did not “inadvertently contribute to systemic racism.”

“For years, the image of an African-American chef appeared on our Cream of Wheat packaging,” the company, B&G Foods, said on Thursday. Although research suggests the image may be based on an actual chef from Chicago, “it reminds some consumers of earlier depictions they find offensive,” the company said.

It is not immediately clear when the change will take effect.

Cream of Wheat, which depicts a smiling Black man in a white uniform worn by chefs, has not changed much since its debut in the late 19th century. The character was named “Rastus,” a pejorative term for Black men, and he was once depicted as a barely literate cook who did not know what vitamins were.

The chef’s face changed in the mid-1920s when a Chicago waiter was asked to pose in a chef’s hat, said Gregory D. Smithers, a professor of history at Virginia Commonwealth University in Richmond. He said the waiter, identified by some scholars as Frank White, was paid $5 and no royalties.

“In that the Cream of Wheat ‘chef’ exploited a racist caricature that perpetuated stereotypes of African-American people in subservient forms of employment, and in the service of white people, the imagery needs to be confined to the dustbin of history,” Professor Smithers said.

B&G Foods was one of several food companies to announce in June that it would re-evaluate the racial undertones of its brands after widespread protests set off by the killing of George Floyd in Minneapolis renewed the focus on images that the companies had used for decades to sell their products.

“We understand there are concerns regarding the chef image,” B&G said in June in announcing a review of its packaging.

Mars Inc. announced on Sept. 23 that it would change the name of its Uncle Ben’s rice products to Ben’s Original and remove the image of its once namesake. The image of Uncle Ben, an older, smiling Black man wearing a bow tie, has long drawn criticism for perpetuating a stereotype of Black subservience.

In June, Quaker Oats, which is owned by PepsiCo, said it would rename and rebrand its Aunt Jemima pancake mix and syrup, which also has drawn criticism for its portrayal of its title icon as a racist stereotype of a Black slave.

Also in June, the maker of Eskimo Pie, the 100-year-old chocolate-covered ice cream treat, said it would retire that brand name, and ConAgra Brands, the maker of Mrs. Butterworth’s pancake syrup, said it would re-evaluate its products. Critics have long associated the shape of the Mrs. Butterworth’s bottle, a ConAgra product, with the mammy, a caricature of Black women as subservient to white people.

“It’s a bit late, but better late than never,” said Todd Boyd, a professor of cinema and media studies at USC School of Cinematic Arts in Los Angeles, and the Katherine and Frank Price endowed chair for the study of race and popular culture. “These images are from another era. They were always problematic but until recently there wouldn’t have been the pushback to these images that has evolved over time.”

Isolated changes to brands like Cream of Wheat may seem like small gestures, he said on Saturday, but it’s important to view the changes as part of the bigger picture.

“When you talk about racism — structural, system and institutional — it’s never been just one thing,” he said. “It’s representative of a society built around certain ideas and certain images. Taking the stereotypical image of a Black servant off the Cream of Wheat boxes isn’t going to end systemic racism tomorrow, but it’s part of a larger series of myths, thoughts and ideas that combined have the ability to change perceptions.”