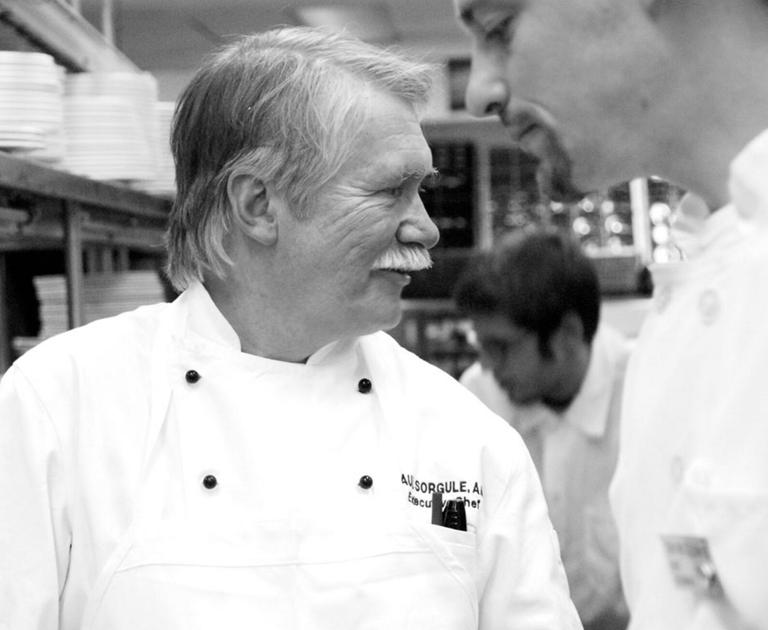 SARANAC LAKE — The restaurant industry has suffered more than almost any other in the country from the pandemic.

According to the National Restaurant Association, the total restaurant sales losses as of Wednesday had topped $185 billion, and August staffing levels were 2.5 million jobs below the pre-pandemic peak. A recent piece by the New York Times predicted 20-25% of independently owned restaurants will never reopen.

How can restaurants survive? Will they? And what role can diners play in helping the industry weather these unprecedented times, and maybe one day even thrive?

Paul Sorgule, 69, of Saranac Lake, has been thinking about the restaurant industry since he was a 16-year-old restaurant dishwasher.

For 26 years, he thought about food professionally at Paul Smith’s College, where he founded the culinary program. (He’s also an alum.) He continued to think about it as executive chef at the Mirror Lake Inn in Lake Placid, and as vice president for culinary education at the New England Culinary Institute in Vermont. A member of the 1988 New England Culinary Olympic Team, he has cooked at the James Beard House in New York City, has written two books, is now president of a restaurant consulting firm, and has an industry blog and podcast called Harvest America Ventures at harvestamericacues.com.

So what does Sorgule think about the future of the restaurant industry, after more than 50 years of working in it?

“In my business, that’s what I spend most of my time doing — speculating about what’s going to happen in the next six months or year,” said Sorgule recently from his home in Saranac Lake.

“We’ve never faced this type of dilemma before,” he said. “We worked our way through 9/11 and the 2008 collapse. In those cases the industry was able to survive and thrive. We’re not so sure this time.”

The restaurant industry has always been much more fragile than those who don’t work within it realize. Many in the industry — the fast-food workers, dishwashers, line cooks, bartenders, servers, delivery drivers and others — lived from paycheck to paycheck even before the pandemic. And the restaurants where those workers are employed live from sale to sale, said Sorgule.

“What a lot of people don’t realize is that the small, private restaurants are the backbone of the industry, and that they’re the ones that have been hit the worst,” Sorgule said.

Sorgule is quick to point out that restaurants aren’t necessarily looking for handouts, and the Paycheck Protection Program — an emergency loan program that gave out billions to small businesses affected by the coronavirus in its early months — helped keep many restaurants afloat, at least during early days. Loosening liquor license regulations also helped, as did making outdoor dining possible in many locations where it wasn’t.

But with many restaurants limited to 25% capacity, transitioning to outdoor seating and running take-out service to keep open, survival is nowhere near assured. And that’s if the restaurants have reopened in the first place, which many have not.

“All take-out does is create a little cash flow,” Sorgule said. “If they do everything right, restaurants might make a 5-6% profit. It doesn’t take much to lose that.”

Other issues have come to light in the wake of the pandemic, including a problematic supply chain, low profitability and a labor market hampered by a lack of affordable housing, inadequate health insurance and sometimes toxic work environments.

The Adirondacks had a very good summer, tourism-wise, thanks to excellent weather and a visitor boom that was partially due to the pandemic. Restaurants could do outside dining, and take-out suited folks in town for outdoor activities. In the evenings, restaurants that had indoor dining were often at capacity.

“What happens in a couple weeks — or in February when it’s 20 below?” Sorgule asked. “Once we’re into winter, these restaurants are going to starve. I have a tough time finding a scenario that works.”

As if considering how depressing it all sounds, and it does, Sorgule paused and shifted gears.

“Historically, restaurants are the first to recover. World wars, famines, economic collapse — when things start coming back, it’s the restaurants. We might lose 50% of our small restaurants, but they will come back.”

The urge to eat together, to share food and drink and gather, is a profound one. It is sending now, and will continue to send, diners back to restaurants. It may not be the fine-dining restaurants, but it will be something.

And restaurants will reinvent themselves, as they always have.

“The stage is set for a new model. We’re going to have to reinvent ourselves,” said Sorgule, pointing to the pop-up restaurants and food trucks that transformed the industry after the 2008 recession.

Restaurants have a long history of revitalizing neighborhoods, providing gateway jobs and evolving with communities. If they can survive — with the help of diners who continue to support them during these unparalleled times — then they can continue to do so. And we can continue to gather and eat at their tables.

“Hopefully our heyday is just at a lull.”

What did 511 epidemiologists say about when they would eat out, get a haircut, send kids to school? – KIRO Seattle