Inside a shopping mall in south Berlin, two colleagues are chomping on hamburgers and fries, cheese sauce running down their fingers as they try to beat the lunchtime clock.

Feelings of guilt are in short supply this Friday afternoon: the burger joint where the two women have grabbed a bite is called Vincent Vegan, and the patty inside the brioche bun is made of wheat, barley and soya.

“If we eat fast food, we may as well cut out the beef to feel a bit better about it,” says Tatjana Kröger, 28, a retail assistant who says she tries to go meat-free about three days a week.

In the land famous for its pork knuckles, schnitzels and endless regional varieties of sausage, such culinary habits are no longer a niche trend but part of the mainstream, as a survey published in the scientific journal Foods discovered this month.

Carried out by teams of researchers from Berlin, Bath and Franche-Comté in eastern France, it found that out-and-proud omnivores, those who eat meat without any restrictions, are for the first time a minority in Germany.

Around 42% of those questioned said they were deliberately reducing their consumption of meat in some form, by keeping to a diet that was either vegetarian, vegan, pescatarian or “flexitarian”, meaning centred around plant food with the occasional piece of meat on the side. A further 12.7% of respondents said they “don’t know” or would “prefer not to say”.

The flexitarian approach has considerable support among environmentalists: a recent report by the UK Climate Assembly advocated people changing their diet to reduce meat and dairy consumption by between 20% and 40%, rather than cutting them out altogether.

Germany, said Christopher Bryant, a Bath University psychologist who worked on the study, had reached a tipping point in its attitude to meat consumption much earlier than previously assumed.

France, the other great European carnivore nation surveyed in the project, trailed behind its neighbour, with 68.5% of respondents claiming to eat meat without restraint. In both countries, those who have curbed their meat eating said they had done so out of concerns for animal welfare and the environment.

“The social implications [of the German numbers] here are potentially quite profound,” said Bryant. “The view that being a carnivore is ‘normal’ is part of the lay moral reasoning for continuing to eat meat. But once that is a minority view, and meat replacement options become cheaper and tastier, the trend is likely to continue in one direction.” 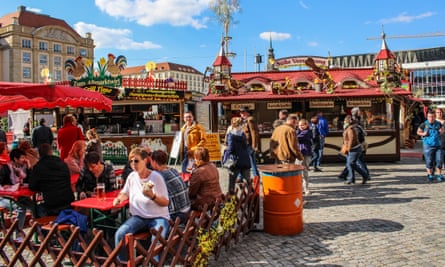 Christian Kuper, a former management consultant who started Vincent Vegan off a food truck at music festivals in 2014, says he would not have chucked in his old career if he did not actually believe that vegan dining could be commercially viable in the long run.

The burger joint, which uses the hashtag #veganisnotatrend on social media, has four outlets in Hamburg and Berlin, all of them in shopping malls rather than on trendy high streets. “We wanted to go straight into the mainstream, because we knew that is where the demand will be”.

The chain’s newest outlet is inside the Schönhauser Allee Arcades mall in Berlin’s Prenzlauer Berg, where it took over a space previously filled by a kebab shop.

And the competition is taking note: 100 metres down the road a branch of Burger King now offers “plant-based nuggets” made by Dutch producer the Vegetarian Butcher. McDonald’s added a vegan burger to its menus in Germany last May.

Overall, meat consumption in Germany and France remains higher than in the developing world, and any declining tendency is expected to be outweighed by developing countries becoming more carnivorous as their purchasing power increases: global production of meat is forecast to increase by 15% in the decade to 2027.

The shift in balance was nonetheless significant, Bryant said, when taking place in the two EU member states central to European agricultural policy, where France has a trade surplus and Germany a deficit in agri-food goods.

The survey also found evidence for “substantially large markets” in France and Germany for cultured meat grown in laboratories, which optimistic forecasts see clearing EU regulatory hurdles as early as 2022. German consumers were more open to the concept than French shoppers, especially if they could be reassured that in-vitro meat would not be genetically modified.

Acceptance for cultured meat was significantly higher among agricultural and meat workers, suggesting that those who are closest to meat production or processing were most likely to prefer alternatives.

Is pasta the new pizza for middle-class Indian consumers? – Livemint

How McDonald’s, Chipotle, and Other Fast Food Chains Are Responding to the COVID-19 Outbreak – GoodHousekeeping.com