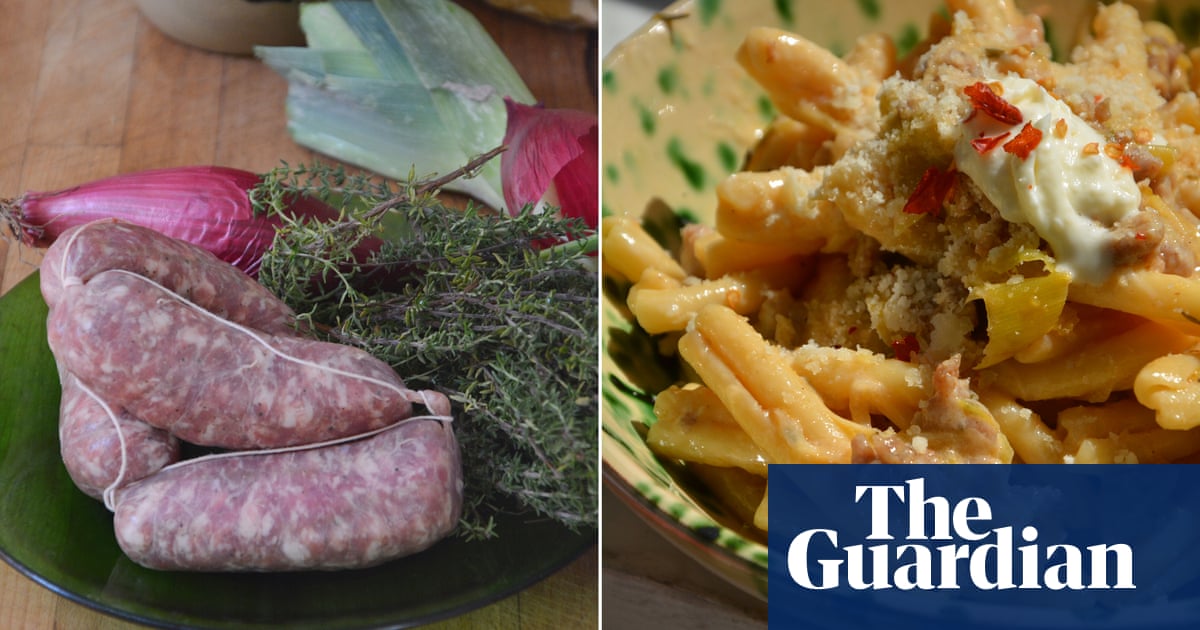 Having unintentionally defrosted the freezer by leaving the door open, we have been eating the consequences, most of which were the consequences of recipe testing or the fact that I use the freezer as a way of suspending the guilty decision to throw things away. It is not a big freezer, so with all the consequences there is not a lot of room left for much foresight beyond ice cubes and peas. Also sausages: nine in all, three in one bundle, the rest individual logs – two of which were embedded like ice mummies, then released when the ice cap in our rented freezer melted on to the floor of our rented flat. Also released was a pot of mascarpone.

Earlier this summer, I spent the day cooking with a young chef called Alessandro Venturi, originally from Rome, and now making and serving some of the best Roman food you will eat from his food truck in York. He is hugely knowledgeable and passionate, and particularly skilled at bread and pasta, which was what we concentrated on, including a distinct, curly gnocchi using two doughs that I will write about soon. What stayed with me, however, was his ability and advice about bringing together pasta and sauce, which was actually nothing I haven’t seen or heard before, but things clicked while watching him at my stove.

Alessandro treated the cooking water, well salted and cloudy with starch from the pasta rolling in it, as an ingredient, adding just a little to the bubbling sauce, which both thinned and thickened it. He reminded me of the need for a big frying pan, one you can make the sauce in, as well as one you can mix the sauce with the pasta in. Really mix, swish and jolt in an attempt at that tidal wave movement that knocks the starch from the pasta into the sauce of, say, sausage and leek, which gives that lovely, glossy coming-together. He also reminded me that cheese is a facilitator: added at the same time as the sauce, it acts as a melting binder.

And, of course, if you happen to have a tub of mascarpone released from its ice prison, you can add some of that, too. Not only as a binder, but as a brilliant partner to sausage and leek, softening the edges of both, but not dominating.

And for after, brown-bread ice-cream with no sugar? Defrosted prune granita? The filling intended for a lemon tart and a biscuit cut from a log of frozen dough, probably almond?

Pasta with sausage, leek and mascarpone

Bring a large pan of water to a boil for the pasta. Squeeze the sausagemeat from the casing and crumble the flesh.

Trim the leek, stripping away the outer layer, then trim the root and very dark green parts, split, rinse very well and slice.

In your largest frying pan, fry the leek in the olive oil until soft and collapsed, then add the sausagemeat and thyme, and cook, stirring, until the meat is no longer pink. Pour over the wine and leave to bubble gently.

Once the pasta water is boiling, add salt, stir, then add the pasta and cook until al dente, bearing in mind that it is going to cook for another minute with the sauce.

While the pasta cooks, scoop out three tablespoons of the cooking water and mix in a small bowl with the mascarpone and pecorino.

Once the pasta is done, drain, saving some of the cooking water, and add the pasta to the sauce (or use tongs or a spider to lift directly into the sauce). Toss, swishing the pan vigorously, and cook for 45 seconds, always stirring or shaking the pan, adding a bit more cooking water if it seems dry. Pull the pan from the heat, scrape in the mascarpone and add a few grinds of black pepper, and swish again, so everything comes together. Serve, passing round more grated cheese.

Back in Chennai, Viswanathan Anand looks forward to home food and bonding with son – ESPN India