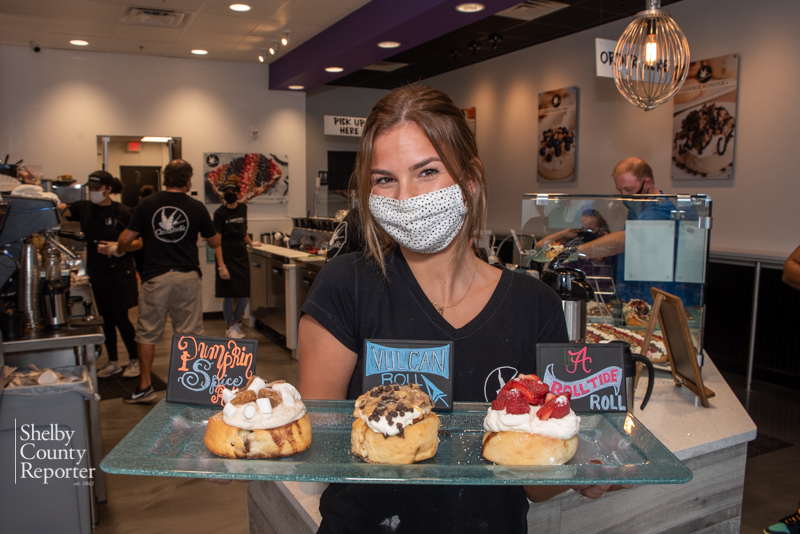 HOOVER – The wait for a new and much-anticipated gourmet cinnamon roll bakery to open in Lee Branch is over.

On Friday, Sept. 25, people flocked to Alabama’s first location of Cinnaholic, an Atlanta-based bakery known for its vegan cinnamon rolls and sweet treats.

“Today has been a good day,” Cinnaholic Hoover franchise owner John Rumore said in a mid-afternoon interview. “There have been a lot of happy, smiling faces coming in and out of here.”

Rumore said his team had served a steady stream of customers since opening the doors at 11 a.m.

“We’ve had a great response from the public and really appreciate everybody coming out,” he said.

Founded in 2010 by Shannon and Florian Radke, Cinnaholic offers 100-percent vegan products that are dairy- and lactose-free, egg-free and cholesterol-free.

In a previous interview, Rumore said Shannon Radke spent more than a year working on the recipe, noting the absence of ingredients such as dairy and eggs makes Cinnaholic’s cinnamon rolls and treats safe options for people with certain food allergies.

The Radkes’ creations caught viewers’ attention when they appeared on the popular ABC television show Shark Tank in 2014.

After their screen time, the Radkes started to expand the brand across the U.S. and Canada.

Everything Cinnaholic sells is made from scratch, from the cinnamon rolls to the brownies, Rumore said.

Customers can build their own cinnamon rolls from more than 20 frosting flavors and various fresh toppings, or they can choose from Cinnaholic’s bestsellers, which include Blueberry Pie, Strawberries and Cream, Cookie Monster and the classic Old Skool Roll.

In addition to the cinnamon rolls, Cinnaholic offers Baby Buns, or bite-size versions of the rolls that are served plain or frosted with one topping; fudgy brownies; chewy chocolate chip cookies; edible chocolate chip cookie dough; and Cinnacakes, which come in small, medium and large sizes.

There are nearly 40 Cinnaholic locations around the country, and a second location in Alabama is in the works, Rumore said.