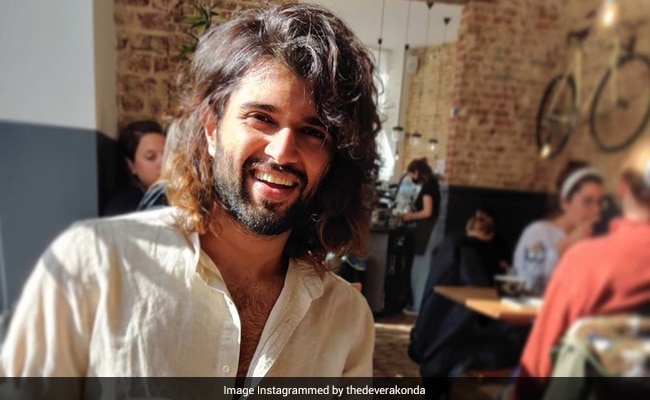 Arjun Reddy star Vijay Deverakonda found solace in Europe and he shared a picture of what his “happy escape” looks like. On his Instagram profile, the 31-year-old actor shared a photograph, in which he can be seen flashing a bright ear-to-ear grin. The picture appears to be from an eatery as the actor can be seen posing with a plateful of food. Vijay Deverakonda revealed that the picture happens to be from Europe (where exactly on the continent, he didn’t say). He captioned the post: “Europe – my happy escape from the madness of work, escape from the abnormalcy of being an actor and most importantly my food heaven.”

Back home, the actor was staying with his mother and his brother Anand Deverakonda. Also, he had two furry friends accompanying him. We are talking about his pet dogs Chester and Storm. Posting a super cute birthday greeting for his mom last month, Vijay wrote: “I’ll make sure you are happy forever Happy Birthday Mumma.” The video also featured his brother Anand and his pet dog.

Check out the video here:

In terms of work, the Telugu star was last seen in World Famous Lover. He will also feature in a film, co-starring Bollywood actress Ananya Panday.

Vijay Deverakonda made his acting debut in 2011 film Nuvvila. However, his breakout performance was in the 2016 film Pelli Choopulu. The actor is best-known for his performances in films like Sandeep Reddy Vanga’s Arjun Reddy, Ye Mantram Vesave, Mahanati, Nadigaiyar Thilagam, Geetha Govindam and Dear Comrade, to name a few.

Could collagen dominate food and beverage in 2020? – Food Dive