Sometimes it just takes 98 square feet to get things moving.

After a pandemic delay, developers reshaping the historic Kern’s Bakery site in South Knoxville have signed the first two tenants for its 75,000-square-foot food hall.and plan to begin construction in January.

Flourish Flower Truck became the first business in the door and will occupy a 98-square-foot space — the smallest in the mixed-use facility.

Tenants are lauding the food hall concept, named one of the top international food trends in 2019 by food travel experts, for its low cost and high visibility for local, artisan brands. 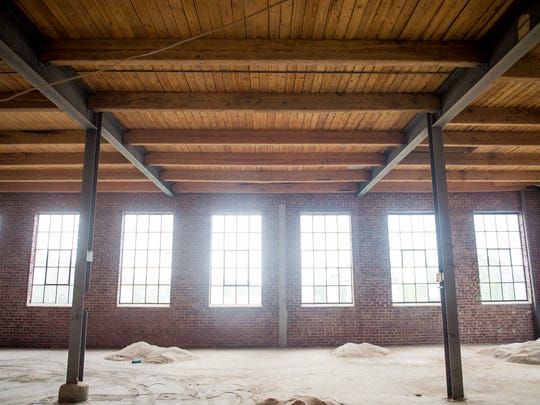 The interior of Kern’s Bakery Building on Chapman Highway in Knoxville. Plans call for the 70,000-square-foot building to be turned into a restaurant and entertainment center. (Photo: BRIANNA PACIORKA/NEWS SENTINEL)

The historic property, which has changed hands among developers since the bakery closed in 2012, will ultimately transform into a 16-acre mixed use campus on Chapman Highway.

The finished product will be a mixed-use community with apartments, office space, entertainment areas and eventually a brand-name hotel.

Principal Alex Dominguez said Flagship Kerns, a 160-unit furnished apartment complex and the first phase of the project, will open in early 2021.

Phase two is tackling the renovation of the bakery building itself, built from1929-1931 and on the National Register of Historic Places. 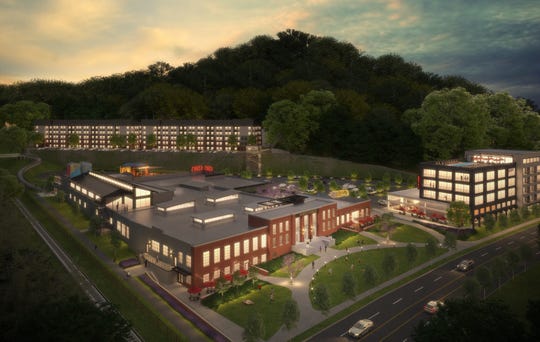 The food hall will feature about 20 food and retail spaces, room for full-service restaurants, communal seating, an indoor-outdoor bar and entertainment space.

Many of the food concepts the developers are courting operate out of mobile facilities or have no storefront presence yet. The concept offers an opportunity to transition to a slightly larger footprint while adapting to an increase in traffic

It’s also an opportunity to enjoy the brick and mortar format without the financial commitment of a traditional restaurant space.

“Moving from a truck environment to a brick and mortar…it’s almost like a half step,” said Lanai Food Truck owner Paul Moody. Lanai is the second signed tenant for the food hall. “The real attraction is that it’s multiple vendors in one spot. We get rid of the one-off (food truck setups), I don’t have to be responsible for alcohol service, we’re indoor, weather is not an issue, driving a vehicle is not an issue, having propane leaks is not an issue, flat tires are not an issue.”

Moody, who launched Lanai in 2019 after stints at Blackberry Farm and his FinnyB’s pop-up restaurant, said he thinks the food truck trend is on the decline.

One example of the trend is Marietta Square Market Food Hall, an 18,500-square-foot former warehouse northwest of Atlanta that opened in 2019. It features about 20 restaurants and retailers.

Though the pandemic has impacted the restaurant sector, a smaller footprint could be a way to combat that financial hit. Dominguez said the hall has plans for prominent touchless handwashing stations and other protocols for keeping customers healthy. 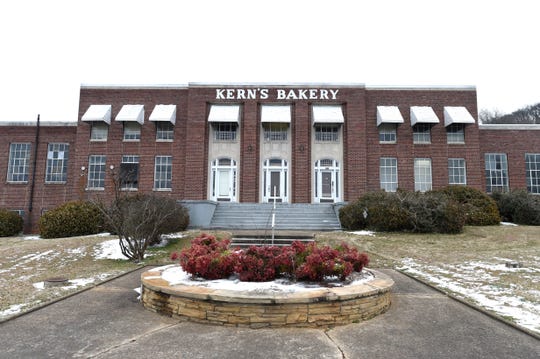 According to an August 2020 article from Conde Nast Traveler, other food halls across the country have established protocols like one-way flow of foot traffic, plexiglass barriers and additional seating areas to keep customer distanced.

The signed tenants hope the collective of restaurants, bars and related retail in one place will create cross-promotional opportunities for all tenants.

Kern’s is in a full court press for leasing, partnering with broker Timothy Martin of TMA Real Estate to seek local, chef-driven, artisan food related businesses to come on board.

Martin said two more leases are close to finalized and there are another 25 potential tenants in the pipeline, including a grocery store, fitness companies and food concepts from coffee to sushi to tacos.

The food hall is the “engine,” for the rest of the project, Dominguez said, which includes 8,000 square feet of office space and coworking space, and, eventually, the development of a boutique hotel.

Dominguez, who spent several decades in real estate with Chick-Fil-A and has developed other multifamily projects in the Southeast, said planned financers hit the breaks in March when COVID-19 shut down retail and restaurants to the public across the country. He’s now secured capital through a lender out of New York to start construction.

“What I don’t want to do is slow (development) down,” Dominguez said at an August meeting with potential tenants for the food hall.

Dominguez hopes to deliver a finished product by early 2022.