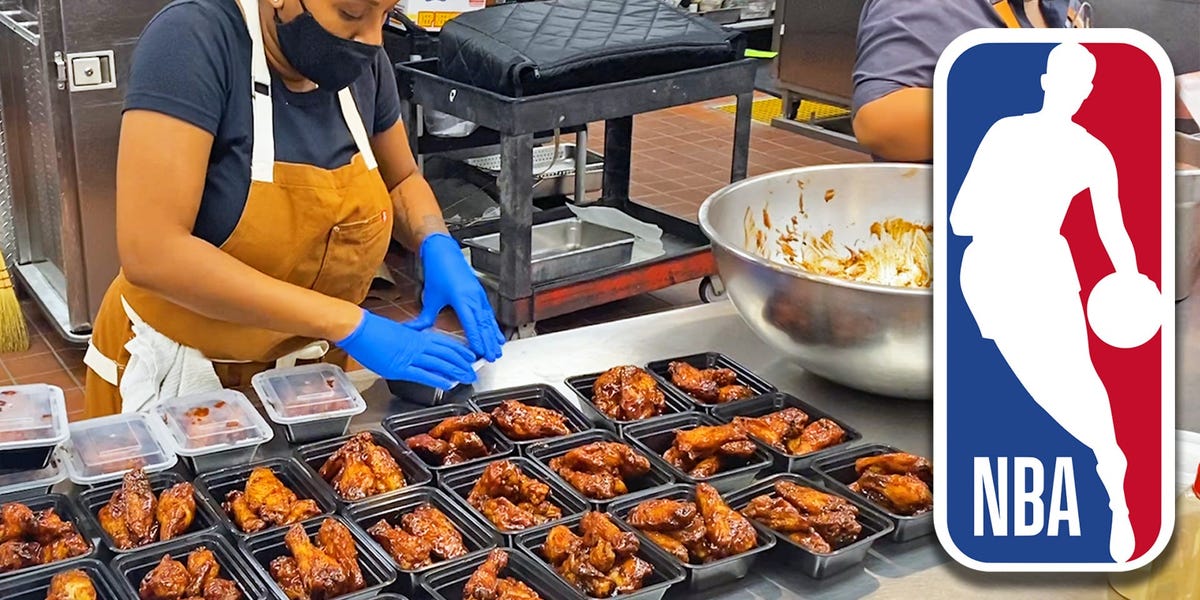 Following is a transcription of the video.

– Alexia Grant: I, for the first five weeks, did not take any days off. I was here, open, Sunday to Sunday, rocking out for our guys.

Narrator: That’s Chef Lex, one of just 10 chefs invited to cook for players inside the NBA bubble, a COVID-free isolation zone on Disney World’s campus.

Alexia: Right now, I’m getting brunch ready for the Heat.

Narrator: Disney was initially responsible for feeding the 22 teams that made it into the bubble. But after negative Twitter reviews and complaints from players, the NBA brought in chefs like Lex to live inside the bubble under strict quarantine.

Alexia: Everything that we have to do has to be at the hotel. We cannot leave. We cannot wander.

Narrator: She and the other chefs whip up about 4,000 meals a week. But Chef Lex is no stranger to star-studded clientele. She’s cooked for the Portland Trail Blazers, Oprah Winfrey, Kelly Rowland, Meek Mill, and competed on Food Network’s “Chopped.” We followed Chef Lex to see what it’s really like cooking thousands of meals for players inside the NBA bubble.

Narrator: For Chef Lex, each day inside the bubble starts at 4:30 a.m.

Alexia: I’m just throwing on the same shirt and throwing my hair up and, thank God, getting on a bus.

Narrator: There are technically two zones within the NBA bubble. The inner bubble houses the players and staff, and the outer bubble is where the chefs live and work. And they’re not allowed to cross between the two zones.

Alexia: We have these really, really strict rules, and if you don’t follow them, you have to go.

Narrator: Chef Lex lives at the Waldorf Astoria but cooks inside the executive chef kitchen. Buses transport her between the two cleared areas.

Narrator: Chef Lex and her assistant, Joy, run Comfort Kitchen, a pop-up Southern and Caribbean restaurant that Lex launched specifically for the NBA bubble. All the other chefs who came into the bubble were attached to a team. But Chef Lex came in as an individual chef.

Alexia: I get to the kitchen, and it’s time to rock and roll. As soon as I get there, I hit the ground running.

Narrator: Teams can browse her menu and place team or à la carte orders through her website. But orders aren’t guaranteed.

Alexia: As teams leave, it is also affecting my sales, and we are all affected by the eliminations. But that’s the name of the game.

Narrator: Chef Lex receives her team orders the night before, so she has a chance to order all the food she needs. Since she’s not allowed to leave the bubble, personal shoppers outside do all of her shopping.

Alexia: Thanks, sis. On my way to cook. See y’all later!

Narrator: Masked up and with her station very clean…

Narrator: Chef Lex and Joy get to work. They start with making the traditional breakfasts.

Alexia: Right now, I’m getting brunch ready for the Heat. They had an amazing game last night and won. So we are doing turkey bacon, chicken sausage. Follow me while I grab my catfish. Beautiful! That’s for my catfish and grits. Literally, the comfort food of the bubble. It’s 11 o’clock, and we have one hour to get all this food out. Crazy, but we’re gonna make it happen.

Erik Spoelstra: Chef Lex, thanks for hosting this great team meal here for Heat Nation. It was the perfect way to celebrate our win last night. Appreciate you.

Narrator: It’s just Chef Lex and her assistant, Joy, doing all the cooking for Comfort Kitchen.

Alexia: You good? Joy Dariel is instrumental in keeping Comfort Kitchen open and running. I mean, I was able to walk away from certain parts of the cooking, ’cause I can micromanage sometimes.

Alexia: Let’s go get this jalapeño salmon. All of the things that I made here are all my own recipes. I’m also, like, jacked. I want to say 20 times stronger now than when I got here.

Narrator: Once everything’s cooked, it’s packaged up for the journey to the inner bubble.

Alexia: This is the Celtics’ breakfast order. Because of COVID, we have to make sure that we Saran-wrap the containers, which is a really important step. Then we bag. All bags are then stapled closed. That’s one of the most important parts next to Saran-wrapping, ’cause it’s how everybody identifies their food. And I’ll be keeping this in the hot box until it’s time to go.

Narrator: Because Chef Lex isn’t allowed to enter the inner bubble, she has to hand off the food to runners.

Alexia: For you, my dear, you got [Denver] Nuggets. This one is for NBA staff.

Narrator: Then the relay race begins. The first runner can only go as far as the security point for the inner bubble. There, it’s picked up by a second runner on the other side. That person finally delivers it to the players.

Chris Haynes: Chef Lex done it again. My food is here. This is my go-to. French toast, bacon, and eggs. On point. Bomb. Appreciate you, girl.

Narrator: Then it’s back to the hotel to rest up and get ready to do it all over again.

Alexia: Working in a situation where I am not able to directly hand off food to my client was really hard and a huge, like, relinquish of power for me. ‘Cause I like my food to get there and be as beautiful as it was when I sent it out. But I have a lot of repeat customers, so that means that my runners have been doing a fantastic job. This has been probably the hardest work that I have done in quite a few years. Most work ever, but I swear I’m beasting, and I’m really proud of myself. I feel like such a boss. Thank you for asking me to do this. Shout-out to the NBA and the bubble and all the guys here.